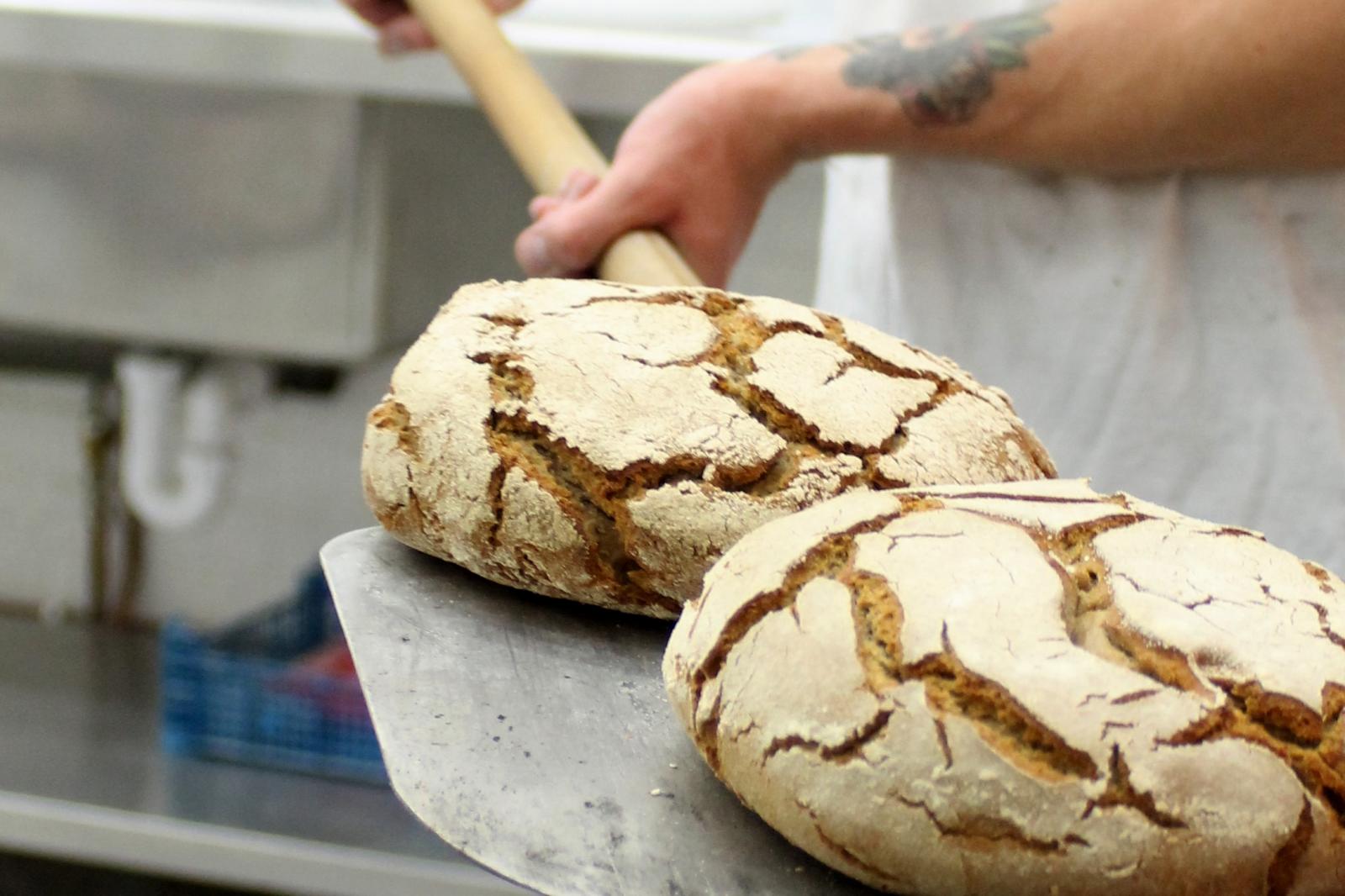 The Real Bread Campaign was co-founded by Andrew Whitley of Bread Matters, and Sustain: The alliance for better food and farming, the charity that runs the Campaign. The Campaign was officially launched on 26 November 2008.

We define Real Bread as made without chemical raising agents, so-called processing aids or any other additives.

This includes, but is not limited to, genuine sourdough bread.

From this simple and universally-accessible starting point, the Real Bread Campaign finds and shares ways of making bread better for us, better for our communities and better for the planet.

We work towards a future in which everyone has the chance to choose Real Bread and can access it within walking or cycling distance.

In the future we are working to help create:

Initiatives that we work on an ad hoc basis include:

You don't have to be a baker to join the Real Bread Campaign!

Rather than members, we have supporters, who share our love for Real Bread and concern for obstacles to its rise. Each makes an annual financial contribution of between £25 and £110 a year towards our charity's work.

For many years we have received no grants or other funding for the Campaign, meaning we rely these annual payments, plus one-off doughnations and income generated by Real Bread gifts.

NB A Real Bread Map listing, participation in the Real Bread Loaf Mark scheme, and siginng up to our free mailing list are all related to, but independent of, being a Campaign supporter.

Drawing upon setting up and running The Village Bakery Melmerby (one of Britain’s first organic bakeries) for 25 years, Andrew Whitley is author of books including the seminal Bread Matters, which won the Andre Simon Food Book Award in 2006. Andrew also won the judges' special prize at the BBC Food and Farming Awards 2011.

Andrew is co-founder of Bread Matters bakery school and consultancy; and of Scotland The Bread, the award-winning organisation working to relocalise the country’s loaf life based around heritage grains, sustainable farming and Real Bread making.

The Real Bread Campaign encourages everyone in our international supporter network not only to champion Real Bread, but also to promote the values and work of the Campaign.

Chris Young has coordinated the Real Bread Campaign since March 2009. His work involves running the Campaign’s international supporter network, creating and running initiatives including Sourdough September, Real Bread Week, Together We Rise (therapeutic/social baking), calling for an Honest Crust Act of better loaf labelling and marketing laws, and No Loaf Lost (surplus and waste reduction), as well as the Lessons in Loaf and Bake Your Lawn programmes for schools.

He’s the author of the books Slow Dough: Real Bread and Knead to Know...more, plus numerous bready reports, and editor of True Loaf magazine. From 2014-18 he also coordinated the London Food Link network, which included editing The Jellied Eel magazine and helping to launch and run the Urban Food Awards.

Chris has pulled on his judge’s wig for BOOM Awards, The Cateys, The Great Taste Awards, The Scottish Bread Championships and The World Bread Awards. In 2017, The School of Artisan Food honoured Chris with its first Fellowship.

Chris draws on the knowledge and expertise of the Campaign’s network of supporters and friends for advice, guidance and practical help. He relies upon Sustain colleagues for management, finance, design and IT support. He is sometimes assisted by part-time office volunteers and advised by a working party of people with relevant knowledge and expertise by experience.

Read all about Sustain, including structure, governance, staff members and more.

In common with most Sustain projects and campaigns, the Real Bread Campaign is guided by a working party. This comprises representatives of Sustain Alliance organisation members and other people with relevant knowledge/expertise. Working party members variously offers advice, information and connections on a range of project-related issues, including on project implementation.

A Sustain working party is chaired by a member of the Sustain Council of Trustees, who reports back to the Council and Sustain members about project progress. A Sustain working party is an advisory (rather than a steering) group. While Sustain is committed to taking the views of working party members into account, ultimately decisions about project or campaign priorities, actions, expenditure and other matters must reside with Sustain as the responsible and accountable body.

As at January 2022, the Chair of the Real Bread Campaign is Alison Swan Parente, a member of the Sustain Council of Trustees and founder of Sustain Alliance member organisation The School of Artisan Food.

The Campaign is run on a part-time basis by Campaign coordinator Chris Young. Please email realbread@sustainweb.org

For media enquiries about the Campaign and all things related to bread and industrial loaf products, please email Chris at: chris@sustainweb.org

If you need comment from a Real Bread baker, you might want to contact one of our official Campaign ambassadors or someone with a listing on the Real Bread Map.

Real Bread Campaign cofounder Andrew Whitley works closely with (but not for) Sustain. He can be contacted at Bread Matters.

How we are funded

Since June 2013, the only income that Sustain has received to enable us to keep running the Real Bread Campaign is from:

We also continue to work to secure additional income from by applying for charitable grants.

We knead your dough!

Currently, Sustain is only able to run the Campaign on a part-time basis by one member of staff.

YOU can help to change that by supporting us in one of the ways above.

Past sources of income

As part of the charity Sustain: The alliance for better food and farming, the Real Bread Campaign is independent from the agri-food industry.

In line with Sustain's general policy, the Campaign does not accept funding from any source which would compromise, or even appear to compromise, the alliance’s principles.

The Real Bread Campaign does not endorse or promote any one Real Bread bakery, baker, course, publication or organisation over another.

Supporter network
You don't need to be a baker to join us! Everyone can become a Campaign supporter, either as an individual or as a representative of a company or other organisation.

Real Bread Map listing
Inclusion in our Real Bread Map is solely dependent on the product shown being what we define as Real Bread. A listings there, on our events calendar, courses or any other pages of our site does not necessarily imply endorsement.

Advertising/sponsorship
In line with Sustain policy, the Real Bread Campaign accepts no sponsorship from profit making organisations in the food and farming sector. The only money accepted from such companies/organisations are standard supporter payments in return for standard benefits, and paid-for advertising in True Loaf magazine.

Campaign logos
If a Campaign supporter chooses to display our 'proud to support...' badge, it simply signifies just that - they support the Campaign. The appearance of our supporter badge is not an assurance that Real Bread standards are being met.