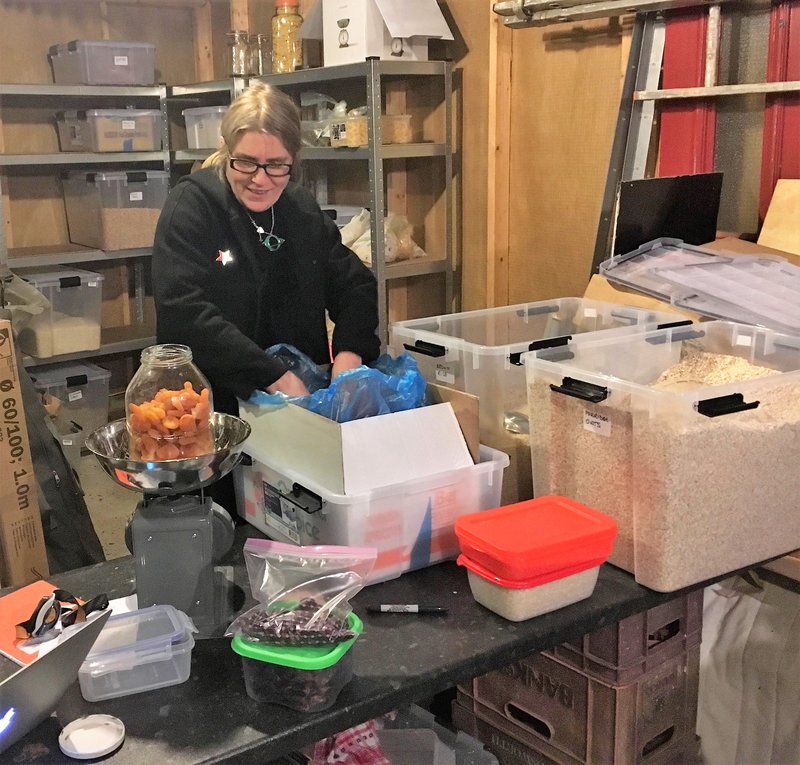 Where else would I rather be on my birthday than out in the garage - again!

Eight people for the last collection, from 8pm, so I was panicking somewhat, given the time taken for previous collections, that I would still be out in the garage in the early hours of Tuesday! So again I did some more refinements. Two counters this time, I laid the boxes out in advance round each of the tables rather than moving them around, on and off the shelves all the time, and each table had a set of scales.

My kitchen scales were better for the goods that were ordered in the smaller amounts and the new scales I had purchased were better for the items ordered in larger amounts. So the boxes were arranged according to the products and the scales which would suit them better. By this time I could give out some of the goods in their original packets where the remaining amount left was what a person had ordered. e.g. I had some 5kg bags of spaghetti, if someone had already taken 2kg and another person had ordered 3kg, I just gave them the 3kg left in the bag, no measuring needed.

I started to find some standard measures for a few of the most popular items, for example I had a measuring jug, which when filled level was 500g of oats. This meant that the jug could just be filled without needing to go on the scales each time. Very handy especially when people had ordered 3kg of oats etc. I also managed to get out in the garage in advance of people coming and start measuring out some of their items, using my tupperware and bowls, so that these could just be tipped into their containers, again to save time.

Finally, on to the issue of accessing the garage in the dark now. Back gate was opened again to make things easier. Then I’d decided I’d light the path to the garage with night lights in jars for a nice atmospheric feel and entrance. I did not bank on the evening being hit with the end of a hurricane however, which promptly blew out all the candles! Sod the atmospheric feel next time, it’ll just be electric lights. At least it didn’t rain though!

Much of this seems very simple now looking back and I was silly not to consider all the
modifications before, but hey, you learn through doing! In then end I had six people come that night as two said they couldn’t make it in the end (another thing for me to consider). We were done in two hours again, so still progress.

I was hoping to enjoy a bottle of prosecco received from one of the members for my birthday at the end of the collection but I was just too knackered to be honest so it’s been saved for another time. Perhaps when things are going even faster!

I should just also mention that the collection process was also a huge learning process for my members. Many people had not thought out their containers properly or what the bulk volumes of things like muesli might actually be like. But we managed and it meant that I was able to recycle almost all the packaging which came with the order. For example, one person ordered 8kg of oats so she just took this home in one of the original oat sacks. Others used bags from the pasta to fill with other items and will now just be able to keep these bags for future collections and so on. A highlight for me was probably sending one person home with a Sports Direct bag full of muesli!! So as they get to know the process more this will speed things up too.

​​Read the next stage in Phili's journey: The no shows!