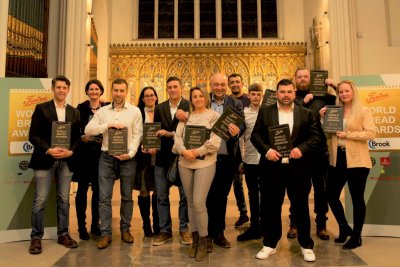 The bakery, owned by Marta Nagy and Istvan Nadhazi, was also named People’s Choice, the only category decided by public nominations. It’s the second time that a loaf made by the bakery has been crowned overall winner, a feat they previously achieved in 2018 with their Real Bread Campaign category-winning French country sourdough.

Loaves made by Campaign supporter Graham Kinnear were placed first, second and third in the Home Baker – Open category, the first time that all three places in a category were taken by the same baker(y). Fellow Campaign supporter Sourdough Dave won the Authentic Sourdough with Added Ingredients category with a toasted sesame sourdough.

The Real Bread Campaign category, sponsored by Shipton Mill, was won by Hearth Bakery CIC, which has created a Real Bread Map listing. Other category winners on our map are Blake's Kitchen, Borislav Petrov and Stir Bakery.

Also on the podium

Campaign supporters whose loaves were named runners up:

Collectively, Campaign supporters gained more than 30 gold awards, plus many silver and bronze awards, for their loaves. The full list can be found on the World Bread Awards website.

The Real Bread Campaign has been a supporting partner of the awards since their inception in 2013, with many Campaign ambassadors and supporters amongst the judges. This year’s awards saw nearly 500 loaves entered, which were blind tasted by around 70 judges, split into smaller teams assigned to each category.