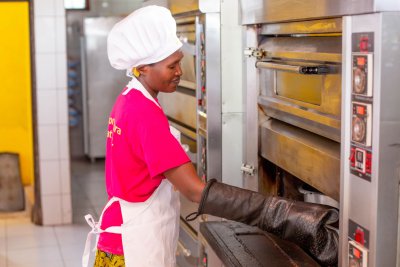 The Women’s Bakery exists to create access to gainful employment for women making and selling nutritious, affordable bread through profitable bakeries. We offer women the choice of learning new skills, improving their communities, and bettering their lives and those of their families. From that choice, opportunity and empowerment are born. Our goal is to use business to confront social problems and create positive, lasting change.

Our organisation was founded in 2012 by Markey Culver but the story began in 2010 when they were Peace Corps volunteers in Rwanda. For two years, Markey taught English, advised new mothers on nutrition, and ran cooking classes for women in the community, using ingredients from the hospital garden.

Craving gluten and carbs, Markey pined for bread. Following instructions in their Peace Corps manual and using ingredients around their village, they made a loaf in a Dutch oven propped up on four stones over a fire. When Markey’s cookery students saw the fresh bread, they asked her to teach them how to make it. “Women immediately gave the bread to their children and I realised this could be a way to address malnutrition,” she recalls. Markey had a dream: to put her MBA to good use by helping women to establish bakeries in East Africa, adding locally-produced ingredients to bread for extra nutrition.

The Women’s Bakery was registered as a business in 2015 and we opened our first bakery in the Rwandan capital of Kigali the following year. We started in a small house with only two rooms, baking only around 5-10kg a day. In 2017, our second bakery opened in Ruyenzi.

In 2018, we moved The Kigali Bakery to larger premises, which became our flagship, with a three-deck oven, an open-air café and room to grow. In the same year we opened a third, very different bakery in Gicumbi, deliberately choosing a site near Rwanda’s oldest refugee camp. It’s in a converted house and bakers have to get their water from a pump in the street. We also formally piloted our first franchise, located in Namayemba, Uganda.

We do a lot of our deliveries by bicycle but, as it’s taboo for women to ride them here, we employ men. In 2019, supporters donated two delivery vehicles, enabling us to deliver bread to more people. This helped us to triple our sales. Despite lockdowns and other COVID-19 restrictions, in 2020, we increased our bread sales by 25% over the previous year. We also set up on-site childcare at all of our bakeries, creating safe spaces for young children while their mothers are at work. The following year, we launched the One Bread Project, which by mid-2022 was serving meals to 11,000 school children every day.

At a TEDx talk that Markey gave in 2018, she pointed to a loaf and asked what the audience saw. After a pause, Markey said: “when I look at this loaf of bread, I see power. Power to change the world.”

Through employment, we help empower women to go from surviving to thriving. Every one of our trainees gets an education that can never be taken away from her. Each receives at least 200 hours of training, which culminates in a certificate equivalent to a vocational degree in the USA. Some women come to us having not had the opportunity to go to school and can go from being unable to read to being career-ready. Suzanne, a baker in Kigali said: “The Women’s Bakery has given me value. Now I feel valued and I am an empowered woman in my family and in my community.”

Starting work at The Women’s Bakery means a significant rise in income. This enables women to pay school fees to provide an education for their children and bakers report being able to provide new clothing and safe homes for their children. Better income also equals better nutrition. Some women report that, prior to working with us, they were only able to afford one or two meals a day for themselves and their children. Our bakers typically can afford one or two more nutritious meals a day. All of our team also receive health insurance and a travel allowance so they can get safely to and from work.

Madina, one of our Ruyenzi bakers, said: “Before joining The Women’s Bakery, I was a potter. Now that I work for TWB, I have medical insurance for myself and my family. I am able to pay school fees for my children. I have gained much self-esteem, and I know a woman can do anything. A woman can be a mirror for everyone.”

Our three bakeries in Rwanda employ 66 people, including 31 women as bakers, making around 3.5 million pieces of bread each year. We’ve also trained teams to set up and run three bakeries elsewhere in East Africa, which now operate independently. While we are a not-for-profit, working with and for NGOs and co-ops, each bakery operates as a business, allowing collaboration and fair competition with other local businesses.

So far, we’ve trained between 75 and 100 women, and now look forward to opening a fourth Rwandan bakery in Butaro (in partnership with UGHE, the University of Global Health Equity) and more beyond. The Women’s Bakery model was developed to be relevant globally, enabling bakeries to be set up and powered by groups of local women anywhere. We say thank you to our team, volunteers, donors and corporate sponsors for believing in The Women’s Bakery. With their generosity we made it and with yours we can do so much more!