We have an Agriculture Act – but let’s not relax now

Head of Sustainable Farming Vicki Hird reflects on several years of hard work to win a better approach to UK farm policy, but warns that the hard work now begins. 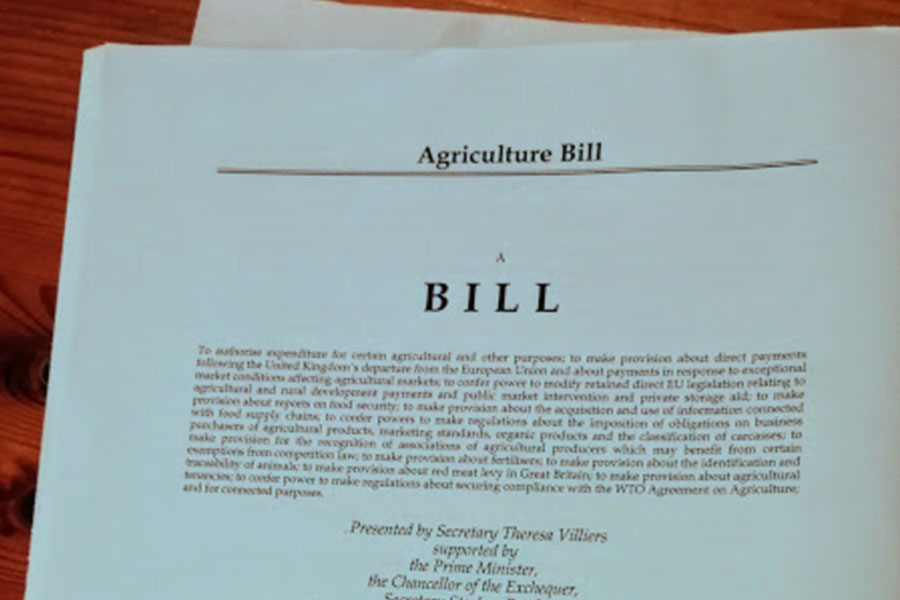 There was a huge pile of papers and a spider plant on my desk when I arrived at Sustain in 2016 to work on new UK farm legislation after Brexit. Four years on and we finally do have a shiny new Agriculture Act (received Royal Assent on 11 November) - the first UK one for over half a century. It has been a blast.

Our hopes and fears

We also pressed our concerns about how the climate and nature emergency should be tackled through land use, agroforestry, soil protection, and the vital role new regulation on supply chains should play. And we imagined the death of many farms - how we could lose so many livelihoods, via amalgamation and abandonment - losing the farm diversity so critical for nature and landscapes, farm livelihoods, rural coherence and for new entrants. All was in play.

What we secured in the final Agriculture Act

Much farm support will now be based on delivering public goods or benefits – supporting farmers whilst helping deliver on top priorities like nature protection, soil health, climate change mitigation, clean air and water, and animal welfare. Environmental Land Management and other policies across all four nations should be better as a result. But there is more work to do on implementation.

A mention in the Act for agro-ecology, soil protection and far greater recognition of the role of whole-farm approaches in delivering sustainable food and farming. All valuable steps.

A brand new fair dealing regulation and transparency for the supply chain – as we know supply chain abuse can hurt farmers’ livelihoods and sustainability here and overseas. This could, if properly implemented, be a real game changer - ensuring farmers and growers have tools to demand better deals and a regulator to enforce new contract codes of practice, designed with each sector in mind so supply chains have to play fair.

A multi-annual financing process which will hopefully ensure that public support is there for farmers,

And a legal commitment to provide regular reviews of UK food security which will be vital given the challenges ahead.

We applied many tried-and-tested tactics in the campaign and political playbook (bar dressing up as a cow) including many hours of alliance and Westminster meetings, evidence sessions, consultation responses, briefings and blogs, media work, actions and events and even some marches. We had highs (getting amendments in; the partnerships) and lows (not getting amendments in; the huge delays).

This has been a massive effort by Sustain, our member, partners, sister alliances and supporters, by farmers, Defra and so on. Some great politicians in both houses of parliament understood what was needed. Thank you. We ended the four years with an almighty roar of passion from supporters with over 5,000 letters to MPs - a Sustain first – plus nearly 1,000 farmers signing a 'famous’ farmer' letter, and a huge, broad coalition calling on parliamentarians to protect our food standards in trade deals.

The Bill itself wobbled several times - and the first version fell in December 2019, but we ourselves never wavered. We always re-grouped, strategised and re-doubled our efforts. Thank you to Sustain alliance members and everyone who has helped in any way, read our blogs, took our email actions and spread the word. This has been a great show of solidarity, and really positive and collegiate working between NGOs and farmers – with hugely valuable joint work with the Greener UK coalition, Wildlife and Countryside Link, Land Workers Alliance, Nature Friendly Farmers Network, organic groups and many other alliances.

What we didn’t win

We didn’t manage to realise our big ambition on agroecology – but it is in there and we will build on that. On agroforestry, new entrants and county farms, climate and pesticide targets we got promises but not in the Bill.

We fought hard to get public health as a purpose in the Bill – seems obvious to most of us that food is health. But no, it appears that it is not obvious to farm policy makers. And we did not get better protection for farm workers – a major disappointment.

We won concessions and partial U-turns on trade and food standards to enhance parliamentary scrutiny but not a final big ask to give protection for standards a legal footing – despite unprecedented public concern (2.65 million signatures; 260 MP letters) and the biggest coalition of unusual partners I have ever seen together. This means that the progressive parts in the Bill, to support farmers in protecting nature, tackling land-based climate challenges, protecting animal welfare, reducing pesticides etc, are all at risk from more agri-food imports produced to lower standards.

And we never managed to penetrate the wall of ministerial indifference to democratic accountability – we wanted to make more of the Bill accountable duties not just powers – more musts and fewer mays – so many of the key clauses are now in the gift of the Secretary of State. We will have to remain vigilant to ensure they do what’s needed.

We have also not got a strong regulatory framework and baseline so everyone knows what’s expected of them in terms of environment, nature, animal welfare and other key issues – it has been promised for two years...

We may well lose thousands of farms from the multiple risks ahead: an uncertain ELMS and support regime; with basic payments reduced to 2027 and no set transition scheme yet; trade deals allowing lower standard imports; Brexit disruptions to markets and supply chains; and climate change impacts such as weather extremes.

It is an unnerving few years ahead. So Sustain will knuckle down to work now with the following:

So to sign off, as HRH the Queen signs her Royal Assent and passes the Agriculture Act into law, I can say this has not been the longest but possibly the most intense parliamentary campaign I’ve been involved in. Thanks for staying on board. Let’s get on with what’s next.