As the Queen's speech confirmed, we are to get a new Agriculture Act after we leave the EU and its Common Agriculture Policy, We had a quick rummage into the past to see what the last one said and it was rather interesting. 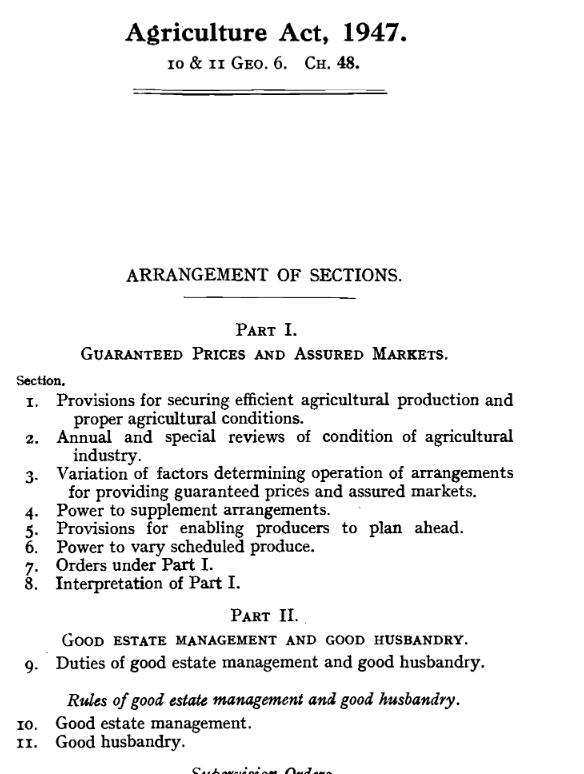 The aim of the 1947 Agriculture Act aim was to increase domestic production and encourage more people into farming across the UK, which had been in decline due to inadequate farming wages in the mid war recession. The Act was to achieve its aims in three main ways:

The first tool, guaranteed prices, was all-important and incredibly powerful. But it iis now a political non-starter as such interventions have caused huge problems of over production and poor market management over the years. But other tools don’t looks so unacceptable in today's debate such as

The debate on a new (UK?) Agriculture Act 2018 (?) has already started with the DEFRA Secretary of State Michael Gove MP proposing some radical ideas; shifting the current, European system into a new UK one based on delivering public benefits. Sustain too has proposed a new set of principles and policy ideas. This is going to be big discussion and we want some significant outcomes for farmers, for citizens, for our health and the environment and for nature. As one expert puts it there  "will never be (in my lifetime) a better opportunity to create a new way of supporting farming that works with nature, that gets us away from this obsession with yield at any cost, that pushes the environmental and social costs of unsustainable food production onto the consumer, onto society and onto nature."

But what was in the old Act? Can we learn from the past?

“The twin pillars upon which the Governments agricultural policy rests are stability and efficiency. The method of providing stability is through guaranteed prices and assured markets.”

The Act was a combined effort from multiple agricultural sectors, the political parties and independent bodies, including the National Farmers Union and Central Landowners Association.

The aim was to maximise food production and encourage a return to farming, which had been in decline due to inadequate farming wages due to the mid war recession.

Most agriculture should be produced in the UK in the near future, however annual reviews will provide flexibility to meet changing needs.

Market fluctuations will be avoided by guaranteed prices for key produce (Wheat, Barley, Oats Rye, Potato Beet, and Cattle fat, Sheep fat, Pigs fat, Milk and Eggs). These prices will be negotiated annually by the Ministry of Agriculture and the Farmers Union in the Farm Prices Review, to ensure farmers receive proper remuneration for their efforts and have adequate incomes.

Ministers are able to fix or vary the price of produce providing sufficient evidence via a review, and approval by the Treasury. Crop prices should be fixed 18 months ahead and animal products 1 year ahead. Minimum prices will be provided 2-4 years ahead, allowing producers to plan ahead.

No single method is set in the bill, options are chosen circumstantially (e.g. provisions may be guaranteed fixed prices, a deficiency payment related to the standard price, paid by the treasury- as with wheat pre-war, acreage payment- as with potatoes in 1947, a subsidy, ect.)

There will be active marketing of foodstuffs to assure markets and encourage increased demand.

Preserving the access to domestic markets for foreign supplies at world prices and maintaining food prices to consumers at world levels.

n.b. Distinctions are made throughout between landowners and managers

Landowners should maintain, fix and repair equipment, permanent pastures and arable land should be kept useable, not over cropped, fertile. Land and animals must be pest and disease free.

Failure to maintain good estate management or husbandry results in a supervision order: Ministers will direct and review the management. Continued failure will result in a fine or dispossession of the land.

Improves security of tenants and farmers.

Tenants are subject to compensation for any improvements, or payments for any deteriorations.

Tenants will be compensated for increasing the value of a holding by the continuous adoption of a system of farming that is more beneficial to the holding than the system required in their tenancy.

Multiple assurances to both tenants and landowners about their contract, liabilities and agreements.

County councils (except London) have a duty to provide small holdings to people with agricultural experience for them to become farmers on their own and these councils become known as small holding authorities. These must provide and maintain equipment and ensure small holdings are sufficient in size for the provision of a reasonable livelihood in accordance with rules of good estate management.

Councils have power to acquire land by agreement, or by compulsory purchase.

Small holdings can be let, on their own or as part of a cooperative system.

There will be annual reports of small holdings.

The establishment of an Agricultural Land Commission and Welsh sub-commission made up of 3-6 members appointed by the minister to manage and farm land vested in the minister, grant tenancies, advise the minister in agricultural land management, to conduct and hold inquiries into matters and provide an annual report.

The minister can acquire by agreement any land used for agriculture, failing to meet definitions set out in this agreement.

Land can be acquired for compulsory purchase for agricultural research or experiments or if retention of the land is in interests of agricultural production.

The minister can advise the re-adjustment of farm boundaries (e.g amalgamation or subdivision) to ensure efficient use.

Continuation of grants e.g. for drainage, supply of water and field liming.

The minister can advise landowners to destroy crops, lands or animals (or limit their movement) to prevent damage by pests or weeds. Expenses can be claimed, owners fined for not complying.

Important definitions arising from the bill, still in use:

Agriculture: “horticulture, fruit growing, seed growing, dairy farming and livestock breeding and keeping the use of land as grazing land, meadow land, osier land, market gardens and nursery grounds, and the use of land for woodlands where that use is ancillary to the farming of land for other agricultural purposes”

Livestock: “any creature kept for the production of food, wool, skins, fur or for the purpose of its use in the farming of lands”.

Due to the new profitability in farming, owner farmers began to replace tenants and farms were consolidated into larger units- additions to the act and the Agriculture Holdings act (1976) were attempts to curb this.

The addition of grants provided to farmers involved with long term improvements to agricultural land.

Long term assurances on the total value of guarantees by more than 2.5% in any 1 year. These guarantees were to encourage farmers to undertake investments and use new technologies (fertilisers, pesticides, mechanisation).

The addition of grants provided to farmers involved with long term improvements to agricultural land. In addition, all existing and future tenant farmers were given life security in their tenancies. This was extended in 1976 to close relatives of deceased farmers. This encouraged a movement towards owner-occupier farms.

Thanks to Lottie Chapman for her help on this article.