There are people missing from the party. How do we engage, welcome and include them? 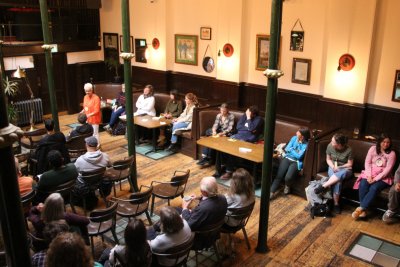 On 1 May 2022, The Real Bread Campaign teamed up with Small Food Bakery and YMCA Front Room @ Malt Cross to organise a day of UK Grain Lab fringe events in Nottingham city centre.

The theme of one of the discussions was diversifying the non-commodity grain and Real Bread movement.

People involved in non-commodity grain farming, small-scale milling and Real Bread making in the UK almost universally extend a welcome to everyone else to join us. There are, however, financial and other barriers that exclude some people from participating, while others feel that they are not invited.

On this point of perception, there are also issues around communication. For example, some people understanding that the definition of Real Bread is narrower than it actually is, leaving them to believe that the types of bread they enjoy making and eating falls outside it.

Not forgetting the role of shoppers in the seed to sandwich web, barriers to some people accessing Real Bread also exist.

The conversation was facilitated by Greenfield Bakers owner/baker, writer and past Real Bread Campaign ambassador, Sonya Hundal. During the session, Sonya asked participants to write their thoughts on the subject. Here are notes collected from participants at the end of the session, organised under thematic headings.

Perception of the Real Bread Campaign

At one level, some of the comments about the Real Bread Campaign’s definitions, values, mission, aims, work and who we welcome indicate the need for us to improve how we communicate with people, both within and outside our current bubble.

At another, more fundamental level, there’s a clear need for those of us in the bubble to help remove barriers to people wanting and being able to get involved in farming, milling, bread making, the Campaign and the wider non-commodity grain and Real Bread movement.

Sonya said: “I really appreciated people who talked to me before and after the session about their own experience and shared their thoughts on the current lack of diversity in the movement.”

Real Bread Campaign coordinator, Chris Young, who sat in on the discussion, added: “The spoken and written comments from this session are helpful additions to the ongoing conversation about how the Campaign – and the wider movement – can improve diversity, equity and inclusion. We will keep asking, listening and taking action.”

If you would like to be involved in helping to improve diversity, equity and inclusion in the Real Bread Campaign, please email Chris.