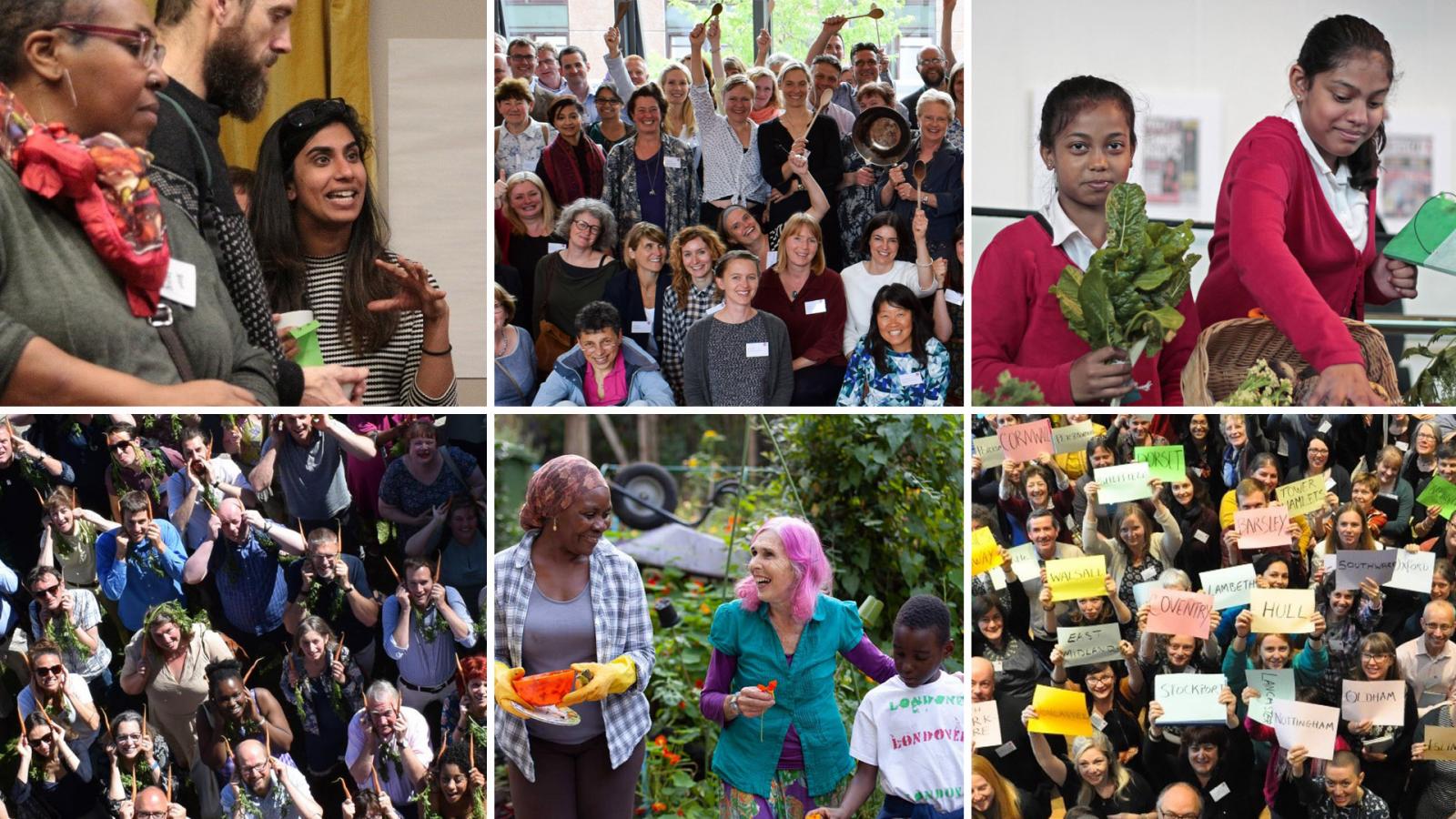 Compilation illustrating Sustain’s work and the people and groups we work with. We want to improve diversity in our staff, members and governance, the support we offer and the projects and campaigns we run. More details of the photos below.

All of Sustain’s work is guided by values and principles of achieving a healthy, fair, humane and sustainable food system. Our alliance also has shared concerns that are highly relevant to the food system, but go beyond just food, farming and fishing, such as tackling climate change, restoring biodiversity, upholding human rights, and promoting economic prosperity and sustainable development that benefit everyone, not just a privileged few – at home and around the world.

Sustain staff, colleagues, alliance members and many others in the food system have a profound commitment to promoting equality, meaning that we want to promote diversity and inclusion across a wide range of characteristics. The extent and depth of racial injustice and racial inequality in particular has always been evident and unacceptable. These have been made ever more vivid and moving in public consciousness by the disproportionate impact of Covid-19 coronavirus on Black people and People of Colour; and by the outpouring of pain and protest expressed during 2020, including as part of the Black Lives Matter demonstrations. Sustain wishes to express solidarity and allyship with people who experience racial injustice, and to take action to play our part in addressing racial injustice.

The team that coordinates the Sustain alliance, and which runs projects and campaigns with alliance members, is currently developing ways to take action on these important matters. We are using this statement to say clearly and unequivocally that we recognise that:

Read a longer statement on how Sustain is approaching issues of racial injustice in the food system - what we are doing and what we commit to do next (a work in progress).

At the time of writing, Sustain’s staff and trustee team are diverse in many ways, but are predominantly White British. We acknowledge that we do not currently reflect the ethnic diversity of the country, nor the capital city in which our office is based. We also acknowledge our own racial and socio-economic privilege. We commit to address these disparities and this privilege and find decisive ways to influence change. In publishing this statement, we commit publicly to doing what we can, and we ask to be held to account for taking action. We also plan to publish a more detailed document shortly that:

This is a work in progress. Actions described are a start, not an end, and we will review, update and publish our refreshed approach regularly.

We do not want to be held back by feelings of ignorance, inadequate progress or undue timidity. Hence, we want to publish our commitments as a ‘work in progress’, acknowledging there are many gaps. We commit to listening and learning, and whilst we will do all we can to get things right, we acknowledge that we are likely to get some things wrong and will be open to challenge.

This is a shared endeavour across the Sustain team. Ultimately, responsibility for Sustain taking action sits with Sustain’s management team and trustees, led by Sustain’s Chief Executive Kath Dalmeny and Programmes Director, Sarah Williams, working with Sustain trustees and staff. We will also recruit external specialist support on racism and equalities to challenge us out of habituated ways of thinking and doing.

Sustain is an influential alliance of organisations interested in working together to reform our system of food, farming and fishing. We bring together over 100 organisations nationally – and hundreds more at local and regional level – cultivating the movement for change. The alliance is coordinated by a smaller team of around 25 employees (many part-time) that provide the alliance secretariat; about two-thirds of whom run projects and campaigns involving many other people and groups; and about one-third build and maintain the behind-the-scenes support structure to enable such work. We have up to 15 charity trustees, who are elected from Sustain’s alliance membership to oversee the work of the organisation; and alliance members and others are involved in our work via projects, campaigns and expert working parties.

This is what we plan to say about our work in the forthcoming Sustain strategy (subject to further consultation and edits), which will help set the priorities of our alliance for the next five years: “Working together, we run highly effective and creative campaigns, advocacy and demonstration projects, aiming to catalyse permanent changes in policy and practice. We support decisive action to tackle climate change and restore nature. We support the growth, replication and acceleration of agro-ecological and high welfare farming practices. We promote sustainable fishing; good food jobs, enterprises and procurement; fair dealing; sustainable diets; healthy food environments; community food growing; good food education and skills; removal of the causes of food poverty and structural injustice; and the eradication of food waste. And we support solutions that are inclusive so that everyone can benefit, not just a privileged few – both at home and around the world.”

Many aspects of this work – to a greater or lesser extent – are relevant to racial justice. This presents many opportunities for Sustain and our alliance to take action to promote justice and equality. How we can do so varies according the ‘sphere of influence’ in which we operate, illustrated below. These spheres of influence are explored in more detail in a longer statement on how Sustain is approaching issues of racial injustice in the food system (a work in progress). 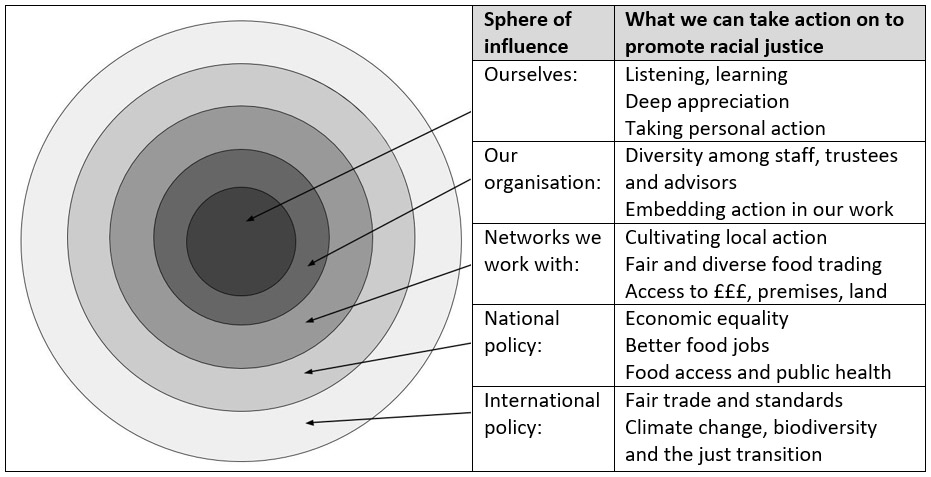 More information about the photo compilation at the top of this article: