Mahala le May rounds up some of the local grain networks that are sprouting up around the UK. 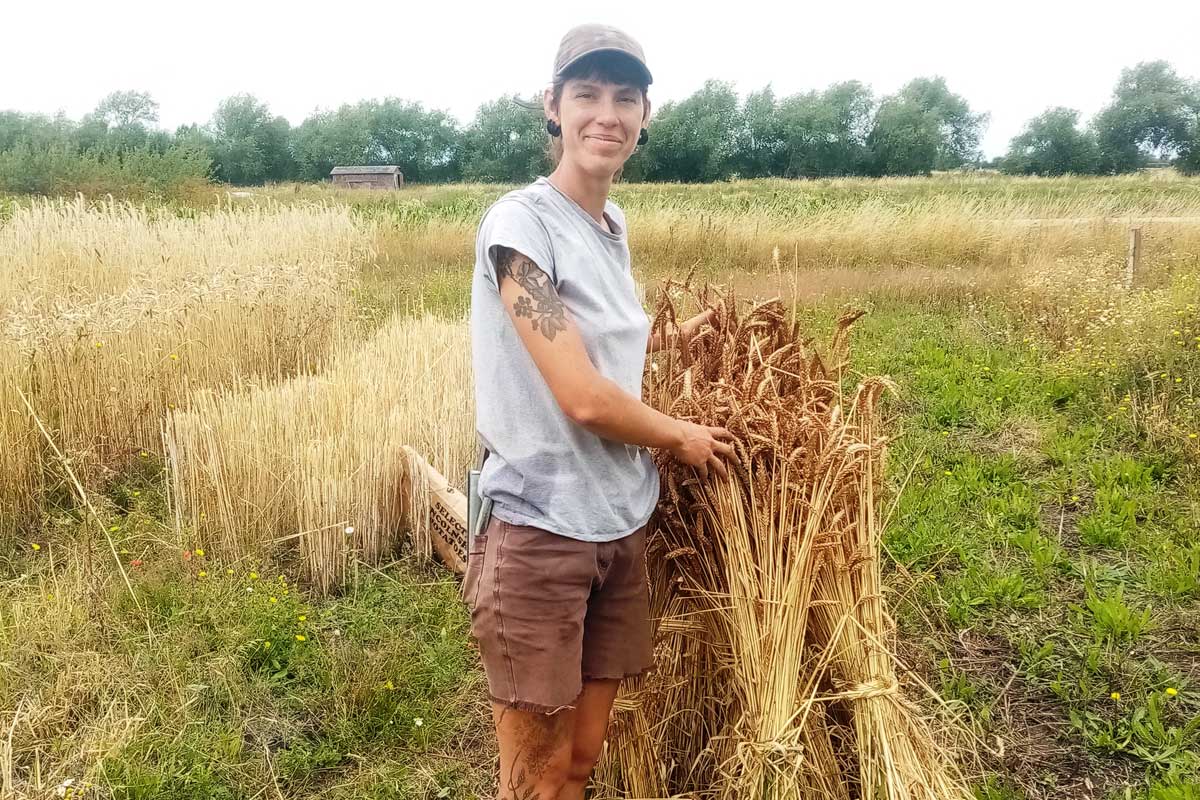 ‘Alternative’ grains are still fairly niche in Britain but public awareness of, and appetite for, them is growing. Shortages during lockdown helped inspire bakers to look beyond the supermarket shelf for flour. Lack of off-the-peg, roller-milled, modern wheat flour has led bakers to be more adventurous with their choices. Gilchesters, Hodmedods and Scotland the Bread all reported unprecedented sales for their flours milled from locally-grown heritage wheats and other non-commodity grains. Organic grower Helen Holmes says: “there’s a whole world of grain out there that can be tapped into, the diversity and variability of grain products that can be grown regionally is something to be celebrated.”

Umbrella groups working with locally-grown grain are springing up around the UK to nurture and feed this demand. These loose collectives comprise varying combinations of farmers, smaller-scale millers, crop scientists, breeders, teachers, artists, academics and Real Bread bakers. Many grain alliances have been inspired to collective action by the likes of Bread Matters, Real Bread Campaign and Scotland The Bread co-founder Andrew Whitley; Small Food Bakery owner-activist Kimberley Bell (see this feature from True Loaf 43), the UK Grain Lab; John Letts; and Brockwell Bake Association’s Andrew Forbes. The groups have also looked to longer-established alternative grain economies that have been multiplying for some time in Australia, Scandinavia and the USA. Here are just a few of them…

The South West Grain Network was established following conversations at UK Grain Lab and the Bread as a Commons event, hosted by farmer Fred Price on Gothelney Farm in Somerset in May 2019. Based at the farm, Field Bakery co-founder Rosy Benson describes the SWGN as “aiming to connect farmers, millers and bakers and demonstrate a supportive community working together towards regional grain supply.” Fred’s farm is an excellent example, having turned from industrial agriculture to a thriving and resilient closed-loop agroecology system.

Cambridge-based researcher and plant breeder Nick Fradgley of the East Anglian Grain Alliance identifies a key issue within the commodity grain market: “I would love to see an alternative system of crop breeding where ownership of genetic resources is not increasingly controlled and driven by securing intellectual property,” he says. “It would be great to see quality criteria [for crop selection] redefined by actual end users to include nutritional or flavour aspects that are actually relevant to consumers, rather than simply industrial processing efficiency.”

Common Grains held their inaugural meeting in Fife in November 2019.  This one-day event pulled together many interested parties to explore how best to create a fairer and fully-accessible approach to regional growing and supply of grain for use across Scotland.

Luke Duffy, owner of Frank Bakery in Coldred, Kent is involved in the establishment of the South East Grain Alliance.  He says: “for me, local grain alliances are about empowerment. We’ve seen how purely for profit and centralised food systems fail the people nutritionally and fail the planet ecologically. As communities of farmers, millers, bakers and consumers we can decide together what we eat and how we farm the land respectfully. We all want to do good and eat well.” He goes on to tell me: “setting up these alliances reminds us of that collective consciousness, and gives our work greater meaning and purpose. Bread tells a story, I want the story to be about nurturance and care.”

Katie Hastings, who works for the Gaia Foundation’s Seed Sovereignty Programme, has teamed up with farmers and growers to form Llafur Ni (Our Grains) Network. They are working to reintroduce traditional oat growing into regional agriculture and are also in their second year of bulking out now rare Welsh landraces from gene banks. Katie says “It’s really important to work collectively on increasing the diversity in our fields. We have older farmers helping younger new entrants into grain growing and showing them some of the more ‘heritage’ machines which are suited to smaller scale grain production and processing.”

The Yorkshire Grain Alliance formed in January 2020.  Farmer Mike Stringer is trialling diverse grains on his family farm in East Yorkshire for the group. The crops include the YQ Population (yield and quality) wheat, developed at Wakelyns Agroforestry by the late Professor Martin Wolfe and the Organic Research Centre, which Mike is growing in the region for the first time. At the time of writing (August) bakers and millers in the group are keenly awaiting harvest and are hoping to inspire more farmers in the area to grow grains for them.

There is much to be hopeful for in our community. We are building stronger relationships between the people involved in the intertwined areas of food and agriculture.  By establishing a movement for human-scale supply of grain and flour, and sharing knowledge around husbandry, growing and crafting, this alternative to large-scale agricultural production and processing can develop further.

What's going on round your way?
If you run a Real Bread bakery or independent mill, please add the details to the Real Bread Map. If you're involved in a local grain network in the UK, please email a link to your website (or social media account) and we'll add it below. realbread@sustainweb.org

Britain and Ireland Community Grains Association has UK maps of local grain groups and stone mills, plus a list of some farms that grow heritage/landrace grains.
Brockwell Bake's wheat:gateway gathers together data about hundreds of thousands wheat lines from many  seedbanks / germplasm collections around Europe and beyond.