In November 2018, Sonya Hundal was one of around 140 people gathered in Nottingham for the second annual UK Grain Lab which aims to promote the growing and eating of non-commodity grains. 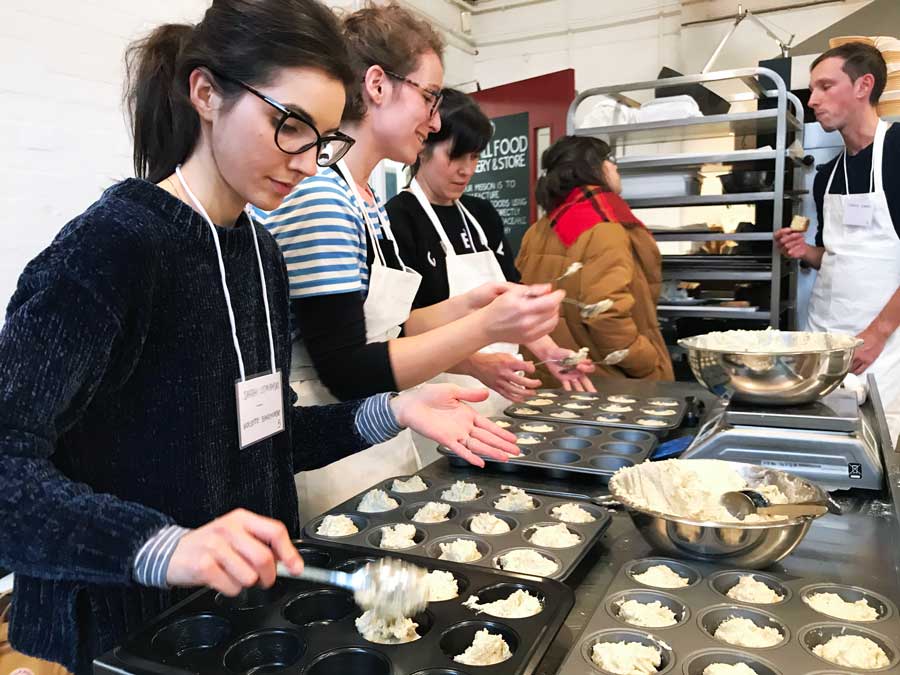 I have to be honest, until I saw an Instagram post from Joe Fitzmaurice, the baker behind the wood-fired Riot Rye in Cloughjordan, Ireland, I’d not thought that attending the UK Grain Lab event was relevant for me. Even as a bread nerd, the thought of spending two days with farmers, millers, bakers, scientists, food producers, artists and bloggers in milling and baking demos, discussion groups, presentations and talks seemed intimidating. However, the opportunity to finally meet Joe after a few years of online pyro chat was too good to miss.

‘It was total immersion in the world of the grain’

To further my own baking skills, I had opted for a group baking session with Dawn. The emphasis was on baking with whole grains for flavour and we produced rye gingerbread cake (three slices of which became my breakfast the next day), a French apple cake (two slices for breakfast), corn cakes (one), lobiani Georgian bean bread (really couldn’t fit any more in) and some amazing tarts for the evening meal.

Sessions included dough rheology in Triticeae grains, a new kind of agronomy, and an introduction to plant breeding. Despite the weightiness of the topics being aired and discussed, there was a good-humoured and fun edge to the event. There were opportunities to sniff sourdough and taste flour and to hear the playing of tuned meat cleavers with our evening meal. Add to this the excitement of bakers and millers working together, baking and quizzing each other in the same space, well… We also took the Flour Ambassador Pledge, created by American cook and food writer Amy Halloran “to shine a light on the wonders of fresh stone-ground flour and help build regional grain economies.”

The most impressive aspect of the event was the willing openness of the participants to share their ideas and knowledge, and to accept questions. To bake in front of your peers whilst they query each process, or to talk about alternative models for food production and distribution with challenging points of view required a great deal of honesty from all the speakers and demonstrators at the event. There was also space to ask broader questions about diversity in the baking world and why the people who buy bread were not taking place in the discussion about the future of bread.

The best part for a number of us was to be able to experience all this whilst being fortified with wood-fired pizza, cakes, pastries, coffee, bread and doughnuts.  And as one my fellow delegates said: “We have become an organism where the parts have learned to communicate with each other.”