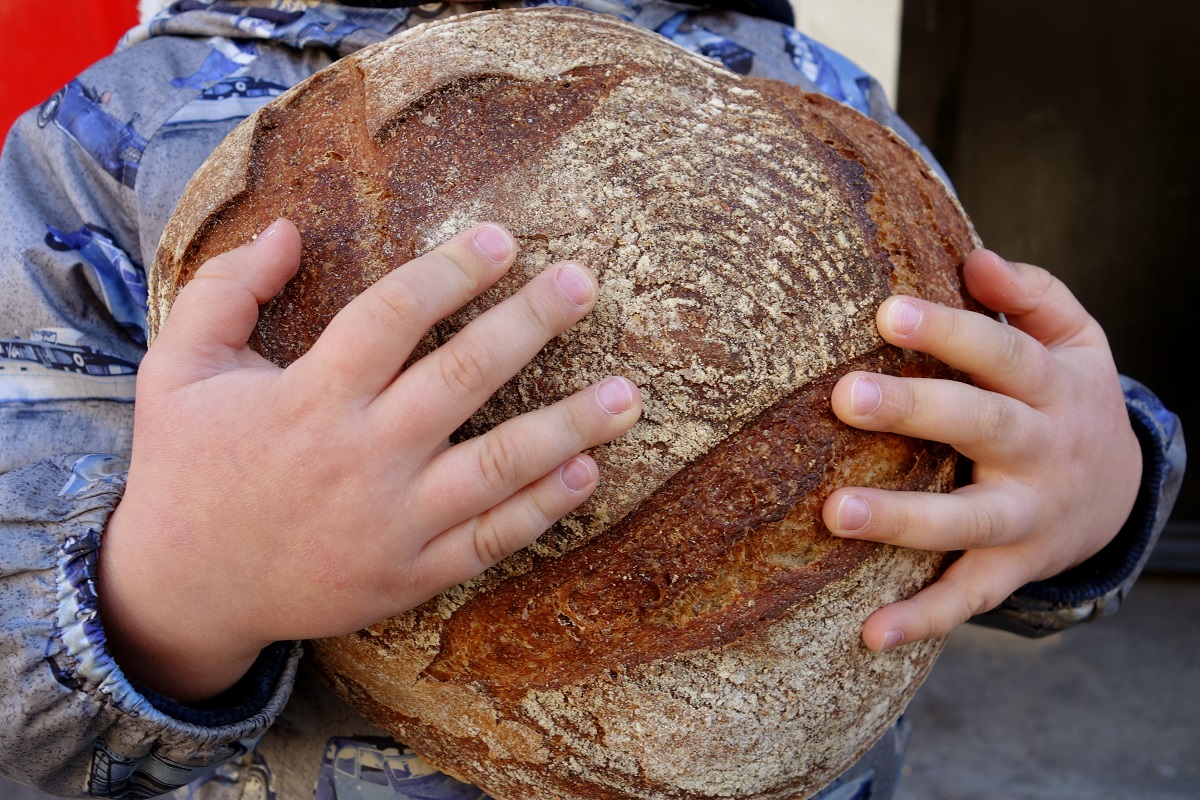 Both interviewer and interviewee forgot to discuss word count, and much of what Chris wrote didn't make it into the published article. Here are the answers in full:

You can make bread from just flour and water, though you probably want to throw in a little bit of salt as well. Work this together to make a dough, roll it out and you have flatbread. Alternatively, you can nurture the yeasts and bacteria naturally present in the flour to create a sourdough starter, or use baker’s yeast, to make the dough rise. Additional, natural ingredients can be used but aren’t necessary and, as far as we’re concerned, if additives are used then what’s being made isn’t bread.

You then cook it, either on a flat surface, such as a griddle or baking stone; in an oven; or by steaming or frying.

When was it invented?

The origins of bread lie so far back nobody knows for sure, but it seems likely that rather than being the creation of one person, it was a discovery accidentally made by a number of people in various places. It’s generally believed that the first breads were made in what’s often called The Fertile Crescent, which stretches from what is now Egypt, around through Isreal, Jordan, Syria and southern Turkey to Iraq and Iran.

Until a couple of years ago, the oldest known evidence of bread making came from around 9000 years ago in what is now Turkey. Then in 2018, scientists excavating a site in Jordan found charred crumbs of what they think were flatbreads made from a mixture of ground wild varieties of wheat and barley, mixed with plant tubers. They were dated up to 14,400 years ago.

Here did the name ‘bread’ come from?

Etymologists believe that the words bread and brew are of Proto Indo European origin, from a root that means boil or seethe, on account of the bubbling during fermentation.

Bread is related to German brot, Dutch brood and Danish brød, and up until some time in the 12th century, the word in Old English seems to have meant a piece, bit or crumb of food. Before that, the word for bread was hlaf, from which we get the word loaf, which is related to Russian хлеб (chleb), Swedish dialect lev and Finnish leipä. Hlafweard (loaf ward, or one who guards bread) is the origin of the word lord.

Is it true the yeast used to make bread is an organism floating freely in the air?

Yeasts and bacteria are around (and in) us everywhere but when it comes to making a sourdough starter, there’s no point in leaving your flour and water mix uncovered (or even wandering around outside) trying to ‘catch’ them. Types that are particularly suited to bread making can be found in relatively high populations on the surface of grains and when the grains are milled, the microorganisms end up in the flour sack as well.

One species of yeast commonly found on grains, and therefore in many sourdough starters, is Saccharomyces cerevisiae. Selectively bred strains of this are used as baker’s and brewer’s yeast.

What percentage of households buy bread?

Who knows, really. In ten years of doing this job, I’ve yet to see any statistics that separate bread from industrial loaf products. Even if you want to muddle the two together, I’m still wary of anything created or distributed by industrial loaf fabricators and that includes the figures they publish. For example, even though white sliced sales have been in an almost unbroken general decline for decades, the numbers that the big bakers’ trade body put out for how many households buy, and people eat, their products are about the same as they were in 2009.

Is bread good for us?

Bread, yes, but we have our doubts about additives used in ultra-processed industrial loaf products. We also believe that there are natural ways to improve the nutritional value of bread and to enable more people to enjoy eating it. The variety of grain and how it is grown can lead to higher levels of vitamins and minerals; different milling techniques can retain more of the fibre and micronutrients in the flour; and the way you turn that flour into bread might improve the benefit we get out of eating it. For example, various studies have found that making bread using a genuine sourdough process can improve the bioavailability of certain micronutrients.

Conversely, we ask if the problems that some people report when certain loaves might in fact not be down to gluten or wheat per se, but reactions to particular wheat varieties, or to traces of agrochemicals that make it into some flours, or to one or more of the cocktail of additives found in industrial loaves, or that they wouldn’t experience if the dough had undergone long fermentation using a sourdough starter culture. Much more research is needed, which we urge government and the big baking and milling industry to fund.

We are also interested in the benefits of baking. Making Real Bread can, and does, change people’s lives. Disempowered women, people with learning disabilities, and prisoners are just some of the many people who’d previously faced challenges finding their place in the workforce but are now gaining skills for employment as Real Bread bakers. Meanwhile, people living with a range of mental health issues, or who have otherwise had a tougher time than many of us, are enjoying the therapeutic and social benefits of making Real Bread by hand in the mutually-supportive company of others. Throughout Real Bread Week, we will be publishing a series of new articles to throw the spotlight on just some of the amazing enterprises and organisations already helping to make this happen.

We all know that the outside of a loaf is the crust but it’s probably less well known that the bit in the middle is known as the crumb. Some bakers refer to the end of a loaf as the heel.

As for upper crust meaning the gentry, there is no real evidence of the supposed medieval practice of slicing a loaf across to serve the top part to people higher up the social scale, leaving the bottom for servants.

Is it true we shouldn’t feed bread to ducks?

The jury’s out but the informed general consensus seems to err towards seeds, peas and other foods being better for ducks, swans and other waterfowl. Although it seems that an occasional slice of bread (or even of an industrial loaf) won’t do any harm, problems may arise if it becomes a mainstay of their diet.

While baked products can provide potentially useful calories in winter, they offer little in the way of the micronutrients that the birds need. The ‘it’s just one slice’ you toss in may well not be the only one, and those cumulative empty calories might leave waterfowl full and fuelled up but, eventually, malnourished.

In addition, an abundance of food that birds don’t eat can attract rats and other vermin (as well as invasive species such as Canada geese) and can rot, which may stimulate algal growth that can take too much oxygen from the water, killing other wildlife.

Is it true bread used to be used for medical purposes? And as an eraser?

Other than the picture of a crusader rubbing a mould (presumably penicillium) covered slice onto a wound in an old Ladybird book, I’ve not heard of bread being used medically.

I’m not sure that you could use bread as an eraser but seem to remember rolling up an industrial loaf slice into a clay-like ball and rubbing out pencil marks when I was at school.

Although medieval trading standards were virtually non-existent, when it came to bread pricing, they were strict to the point of bakers being dragged through the city of London on hurdles for selling underweight loaves. This is the main argument cited for one of the most common stories told about bakers throwing in an extra loaf for every twelve sold to avoid getting caught out. This doesn’t quite ring true for me as regulations were always based on each individual loaf, not 12 loaves, being a set price or weight.

Where does the sandwich come from?

Well, it wasn’t the invention of Gerald, Lord Sandwich, as Blackadder the Third told Baldrick. It almost certainly wasn’t that of the commonly-cited John Montagu, 4th Earl of Sandwich, either. Given that bread had been around for millennia, it seems highly likely that people had come up with the idea of putting things between two slices of it long before the 1760s.

Why do we say ‘the best thing since sliced bread’?

The saying is thought to have been inspired by an advert for the first loaf slicing machine, which included the slogan “The greatest forward step in the baking industry since bread was wrapped.”

Co-founded in 2008 by Scotland-based baker Andrew Whitley, the Real Bread Campaign is run by the food and farming charity Sustain. Starting from a clear, simple and universally-accessible definition of Real Bread as made without any additives, the Campaign’s works to find and share ways to make bread better for us, better for our communities and better for the planet.

The Real Bread Campaign’s work includes the annual, international Real Bread Week and Sourdough September; the Knead to Know microbakery handbook and Slow Dough: Real Bread recipe book; Together We Rise social and therapeutic baking project; No Loaf Lost surplus reduction plan; and the #WeAreRealBread initiative to reveal the many, varied and often hidden faces of the people behind the rise of Real Bread.

The Campaign continues to lobby for an Honest Crust Act of improved loaf labelling and marketing legislation to help shoppers’ make better-informed choices about the loaves they buy and to protect them from being from misled. Post-Brexit, the Campaign will be holding the UK government to Defra’s promise to review the current regulations.

The Campaign’s international network of paying supporters extends to more than 20 other countries. They include Real Bread Loaf Mark users and some of the home-based microbakers, small retail and wholesale bakers, and bakery teachers on the Real Bread Map. The majority of Campaign supporters are simply people who love Real Bread and back the charity’s aims, values and work.