Sustain and Compassion in World Farming are concerned that the UK government is on a path to break its own manifesto commitment to protect the UK’s food safety, animal welfare and environmental standards from future trade deals.

We are concerned the Government might inadvertently support low standard, low animal welfare farm systems around the globe through the trade deals it negotiates now that it has left the European Union. This might include things such as the abuse of medically-critical antibiotics to prop up poor farming practices, chemical washes to mask low standards of hygiene and animal welfare, or cruelty to animals.
Our concerns about animal welfare span all future trade deals however, in this briefing, we have chosen to focus on differences between the UK and Australian farm systems. There are a number of farming practices that are banned in the UK that are still permitted in Australia such as the use of battery cages for laying hens and restrictive sow stalls. Yet, the UK is set to sign an agreement in principle with Australia in June 2021 and spend six months on legal due diligence - all of which will take place with scant parliamentary scrutiny of the deal.

For a policy briefing on the Australia trade deal that covers pesticides, antibiotics, climate and health, please click here. 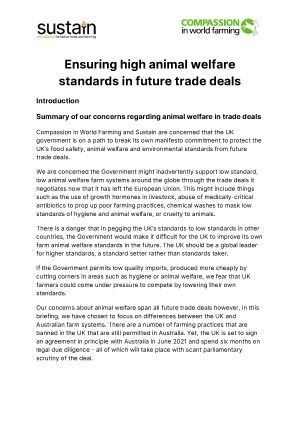