Henry Dimbleby, independent lead on the National Food Strategy, and Defra non-executive director, has written an open letter to the chair of the Trade and Agriculture Commission, Tim Smith, calling for food, farming, health and environment standards in trade deals. 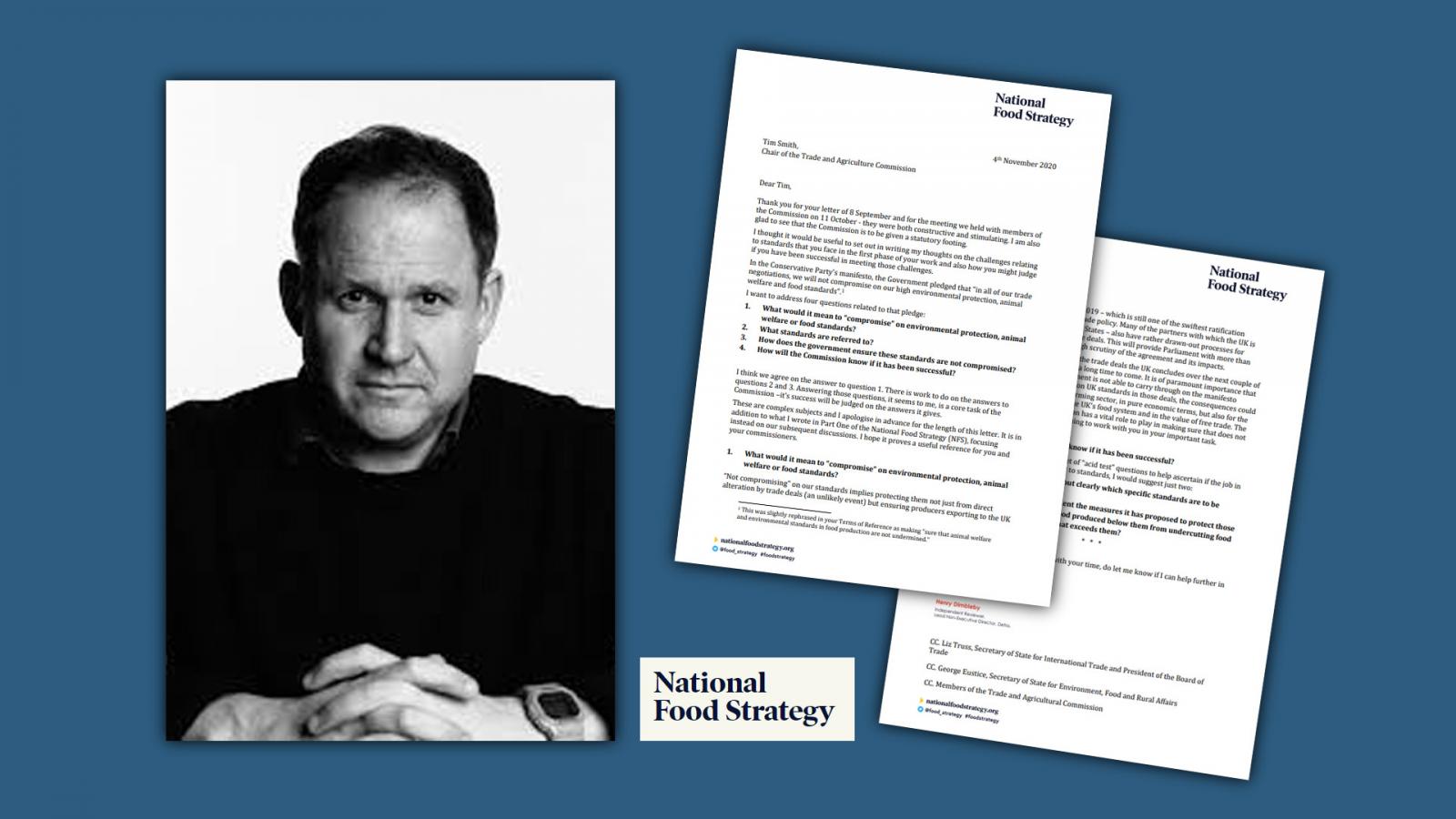 The Commission was initially set up for a temporary period to “advise Government on trade policies to adopt to secure opportunities for UK farmers”. It was put on a statutory footing on 1st November 2020, with a review period of three years.

The 4th November letter follows a meeting between Henry Dimbleby as National Food Strategy lead and the Commission and it was sent shortly after the UK Parliament rejected amendments to the Agriculture Bill that would have protected UK food and farming standards in law, and would have required greater transparency and parliamentary scrutiny over trade deals.

In the letter, Henry Dimbleby outlines his views on the key objectives of the Commission, namely to come up with a definitive list of food standards that trade partners need to meet and find robust ways to ensure these standards are not compromised. He comes up with some suggestions for specific demands that should be included in free trade agreements, saying UK consumers should know:

The letter outlines Henry Dimbleby’s views on the practicality of dual tariffs (lowering tariffs on high standard produce while putting high tariffs on low standard produce) and how best to ensure considerations on animal welfare and environmental standards are included in trade agreements. The letter suggests that the Commission feels dual tariffs are impractical, saying they could get in the way of trade liberalisation and could be against World Trade Organisation (WTO) rules. There also appears to have been resistance to increasing parliamentary scrutiny on the grounds that it might create “unacceptable delays”. Henry Dimbleby stated:

“Free trade is not a good in itself: it is a way in which we seek to deliver other goods, such as lower prices and greater choice for consumers and higher productivity across the whole economy – national and global. People want a strong economy and low prices in the shops, but they also want to know that the food they eat is not worsening climate change or the treatment of animals.”

“We welcome Henry Dimbleby’s letter as a clear signal that a National Food Strategy for healthy and sustainable food must take into account the impact of international trade, and it is good to see that this dialogue is taking place with the Trade and Agriculture Commission. It is encouraging to see underlined the importance of the Government’s manifesto commitment to maintain food, animal welfare and environmental standards and reject the notion of maintaining them at home, while facilitating them overseas. Issues like climate change, biodiversity loss and antimicrobial resistance are global and we need to tackle them collectively, not lock in the farming systems that drive these life-threatening trends through hasty, carelessly negotiated trade deals.

“It is also heartening to see Henry Dimbleby publish this letter openly and stand up so firmly for parliamentary scrutiny. The Government is currently developing trade policy behind closed doors. Lack of transparency is a significant problem, contributing to a lack of trust across civil society and the general public.

“However, we are alarmed that Henry Dimbleby felt the need to write a letter reinforcing the basic job of protecting standards that the Trade and Agriculture Commission is supposed to be tackling, and we are concerned that the Commission lacks teeth on issues of such importance. As the Future British Standards Coalition found the UK can have high standards and be WTO compliant. The UK is free to negotiate bilateral free trade agreements as it sees fit and the British public expects it to do so. As Henry Dimbleby points out, there is WTO case law on production standards and we call on the UK to draw on those positive examples and show global leadership.

“Parliament has rejected writing food standards into law and the Trade and Agriculture Commission appears to view them as a barrier to trade. So who exactly is in charge of maintaining the food, environmental and animal welfare standards that we were promised? The initial Commission membership appointment process was opaque and we still have inadequate environmental, animal welfare, consumer or public health representatives on it. Given the fact that the Commission is to be put on a statutory footing and its lifespan extended, it is our view that the Government must widen its membership to bring in more expertise and clarify its remit, as a priority.”

You can read the letter in full here. You might also like to see the most recent compelling consumer research on trade released by Which? as part of their National Trade Conversation, available here.

In his letter of 4th November 2020, National Food Strategy lead Henry Dimbleby outlines the two main objectives of the Trade and Agriculture Commission as:

In the letter, he goes on to set two key questions for the Chair of the Trade and Agriculture Commission to judge whether the commission has fulfilled its remit. Namely: