What could a Green New Deal mean for food and farming?

Call it a green new deal, green industrial revolution or what you will, the appetite is growing for shifting significant investment into green technology, industry and jobs, with the policies to match. But there has been little focus on what this would look like in the UK for a sector that employs 1 in 8 working people and is worth £113 billion to GDP. Ben Reynolds and Vicki Hird explore. 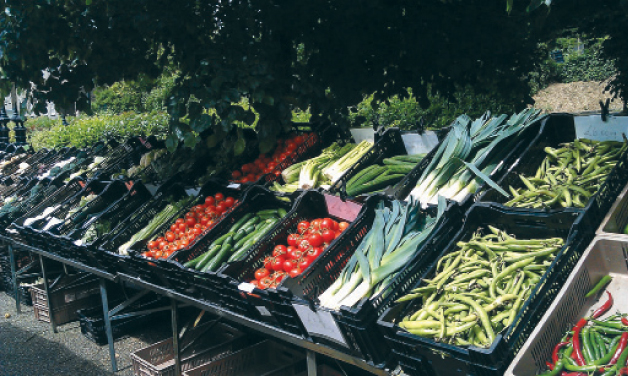 We face an unparalleled crisis for our food system. And this may be coming a little sooner to the UK. Globally farmers are already struggling to adapt not just to the effects of climate change, but also the backlash from some who see farming as part of the problem. In the UK farmers, workers and food businesses all through the supply chain have the added uncertainties surrounding Brexit to manage, with its impact on workforce, supply and price of inputs, and potential new competition from imports.

Many throughout the industry are at best angry, or at worst despairing to the point of leaving the sector all together. Calling this an opportunity for change may raise a few eyebrows, but whether you subscribe to the old adage that necessity is the mother of invention, or the more Churchillian challenge to never waste a good crisis, it would seem we desperately need something positive to pull behind.

Step forward the Green New Deal. Whilst this not a new idea, its time has returned , not least for the reasons above, but also for the high profile traction it has been getting in the US. The proposals put forward by US Senator Bernie Sanders, for example, on food and farming talk about large scale investment in agro-ecological systems and local food infrastructure, and a breadth of policies and vision of which Sustain and its members would most certainly back. And there is a huge opportunity to use existing investment, before looking for more, using a just transition so workers are involved in the process.

The proposals put forward by US Senator Bernie Sanders, for example, on food and farming talk about large scale investment in agro-ecological systems and local food infrastructure, and a breadth of policies and vision of which Sustain and its members would most certainly back.

Sustain and a wealth of farming and conservation groups are calling for existing farm payments of £3.2 billion a year to be invested in delivering  public goods, which include  environmental goods such as trees and hedgerows, and rural development. This should also include investment in agro-ecological whole farm systems, agroforestry, farmer training, support for new farmers, and an explicit link with public health outcomes. A new report from the RSPB, the National Trust and others has made a case that we need to invest £2.9billion at a minimum just to deliver on the current environmental land management priorities, before we even look at what’s needed to recover our natural environment, or supporting farmers in a just transition to adapt to, and mitigate climate change.

we need to invest £2.9billion at a minimum just to deliver on the current environmental land management priorities, before we even look at what’s needed to recover our natural environment, or supporting farmers in a just transition to adapt to, and mitigate climate change.

Whilst farm payments and the replacement of the EU Common Agricultural Policy in a post-brexit Britain have received much attention, this is not the case for other areas of government spend that could be harnessed within a Green New Deal. Prioritising sustainability in work funded by the UK Shared Prosperity Fund (repatriating between £6bn and £10bn of EU structural funds); the Food and Drink Sector deal; and funding for research and innovation; all should be used towards the priorities of a Green New Deal, investing in enterprises that are pioneering the way for a more circular food economy, reusing surplus food that would otherwise go to waste, and keeping value in the supply chain. Or investing in local food infrastructure such as abbatoirs,processing and markets, which would benefit communities across the land. More policy, planning and investment support for diverse food retail could create enterprise and jobs whilst rejuvenating high streets.

There are other sources of money which could go towards supporting a vision for green food and farming, such as the £40 million fruit and veg in schools scheme, and the £160 million Healthy Start vouchers scheme. These could, if better managed, pump-prime sustainable British horticulture and support thriving local supply chains. The UK government is not short of money that could be better used. The Soft Drinks Industry Levy raises £340 million a year, but there are no commitments to ring-fence this in future where it could be spent on school kitchens, breakfast clubs, drinking fountains and the like. Standards for the £2.4 billion of public money spent annually on food should include less and better meat and dairy; more seasonal fruit and veg; more wholegrain foods; zero waste; certified sustainable ingredients; and verifiably sustainable fish. This would help meet both environmental and public health objectives.

The Soft Drinks Industry Levy raises £340 million a year, but there are no commitments to ring-fence this in future where it could be spent on school kitchens, breakfast clubs, drinking fountains and the like.

Equally, we need to look at those policies, which could with the right political will unlock a growth in sustainable food and farming. And lest we forget, fishing, the poster child for Brexit. Much of what is wrong with the industry is already within the hands of the UK Government to change. The UK currently receives the second largest share of fishing quota of any EU country but gives 98% of it to the large-scale fishing fleet - much of which is controlled by a few companies profiting from leasing-out the rights to fish. Small-scale fishing fleets particularly benefit coastal communities because they land over 99% of catches into UK ports, to the direct benefit of local sales, processing and transport businesses. By contrast, around 30% of the fish caught by the large-scale fleet is landed into overseas ports. Shifting just 10% of quota allocation to the small-scale fleet would create an estimated 7,000 jobs, most in struggling coastal communities. Quota could also be used to reward sustainable fishing and data collection. If stocks were allowed to recover they could yield 45% higher landings, an additional 2,400 full-time equivalent (FTE) jobs and could be worth £1.4 billion every year to the UK economy.

Shifting just 10% of quota allocation to the small-scale fleet would create an estimated 7,000 jobs, most in struggling coastal communities. Quota could also be used to reward sustainable fishing and data collection.

Another relatively simple policy change – as called for by the Real Bread Campaign – for proper legal definitions of terms such as sourdough, wholegrain, or freshly baked would mean smaller artisan producers were no longer undercut by larger manufacturers and supermarkets who sell what some would consider a misleading, cheapened version of these products. And with these smaller bakeries providing more jobs per loaf, such a simple policy change could by some estimates of current consumption of these products lead to thousands more skilled jobs in this sector alone - and potentially over 30,000 more if all loafs were produced in this way.

And this point on skilled jobs is key. The current narrative for the mainstream food system is one of increased mechanisation and use of technology that may displace jobs, many of which are admittedly in back breaking or soul destroying labour. We need a vision that embraces mechanisation alongside a growth in more meaningful, skilled jobs that provide good livelihoods in food. Not only is there a market for those goods that are produced this way, but there is a need for these skills across the whole sector.

We were recently involved in an argument with a frozen foods manufacturer over the quality of the products they provided hospitals. The point was that whilst the quality may, for some, have been high on leaving their factory, they had no control over how it was treated at the other end. Putting a meal in a hospital microwave does not compare with the skilled labour of trained kitchen staff cooking on site from scratch to the varied patient needs at all times of the day. This also has the potential for buying through localised supply chains, smaller producers and increases the option to support mixed and agro-ecological farming. The current government has rightly recognised much of this in its current review of hospital food standards – but the investment needed to redress this situation, if it ever appears, needs to be part of a bigger vision that looks across the potential for more meaningful jobs in a greener food and farming economy.

And this could happen in the next year. The Government has begun the process of creating a National Food Strategy, which following plans for significant evidence gathering and consultation, should see the light of day in summer 2020. This is exactly the place where these ideas can be put into policy.

It is our challenge now to better articulate that vision of what investment and policies are needed: for a just transition for those trades that contribute more to climate change, for farmers, manufacturers, caterers and retailers of all scales. What are the sorts of jobs that could be created, and what does this mean for every constituency across the UK.