Six months to the day since the Advertising Standards Authority banned the sandwich chain Pret a Manger from advertising its additive-laden sandwiches and wraps as ‘natural’, the company is still using the claim in-store. Real Bread Campaign coordinator Chris Young wonders: who’s there to protect us from being misinformed or misled by food businesses? 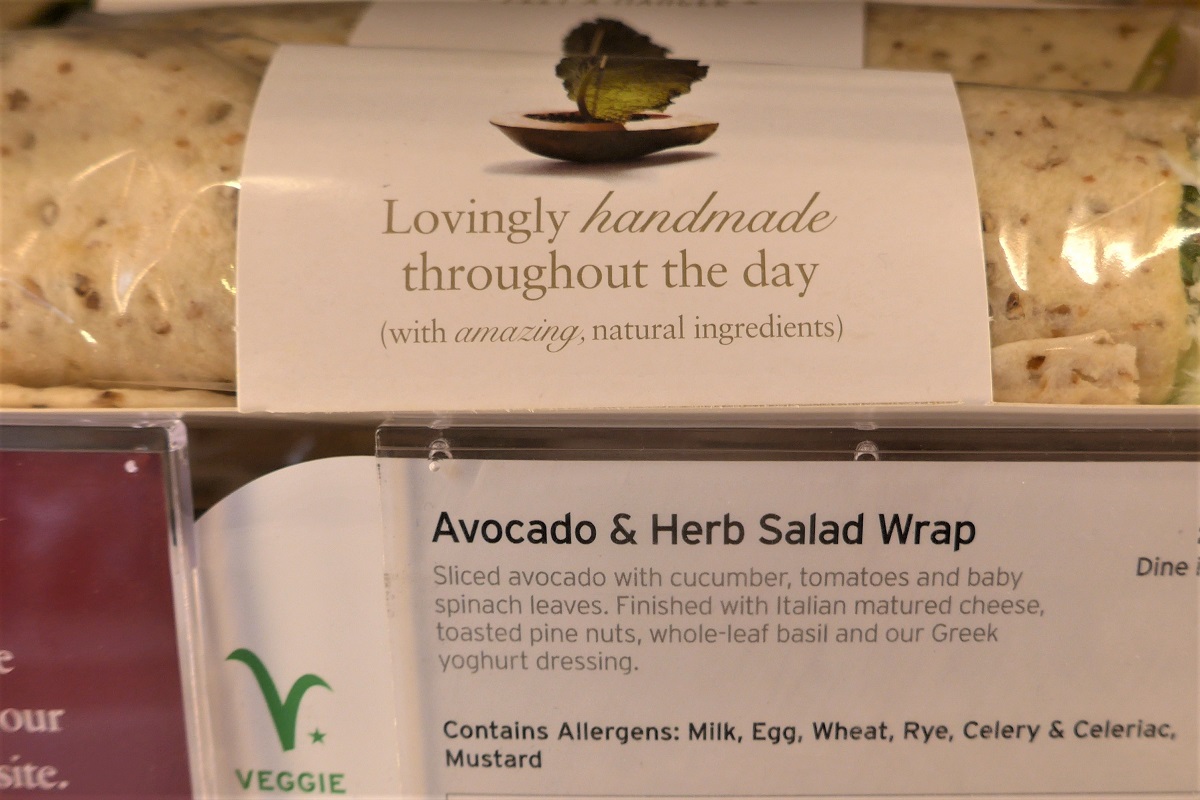 Case study: A Pret in-store display 6 months after the ASA ban. 'Natural' is still there, though a full ingredients list isn't

How then, half a year later, does the company continue to get away with using the word unfairly to tempt everyday lunch-goers?

Let’s be clear, this isn’t just about Pret. It’s about widespread misuse of attractive terms to persuade shoppers that food is – for example – fresh, natural and handmade using traditional ingredients and artisan methods. This is the type of food many of us desire and that are told we are receiving; but due to failure to police the use of these terms effectively, it isn’t always the type of food we get.

As we reported earlier this month in Are Supermarket Bloomers (still) Pants?, a fundamental disconnect between the things big food businesses say and the things they do is endemic.

Claims relating to the time and place of production (such as ‘freshly baked’, ‘baked today’ and ‘baked in store’) of supermarket in-store bakery loaves often belie the fact that they were manufactured a long time ago in a factory far, far away. In some cases, the fresh-sounding ‘baked in store’ can disguise a more truthful ‘initially baked in’ Ireland, France or Italy.

We also found that the phrase ‘ancient grains’ was being used to name and promote some loaves manufactured mainly from modern wheat flour. The term ‘artisan’ was being used without any evidence of the involvement of true artisan bakers (and some evidence to the contrary). Loaves made using baker’s yeast and artificial additives were widely promoted as ‘sourdough’. And displaying full ingredients lists for loose or in-store bakery baked goods (for which the Real Bread Campaign has been campaigning since 2009) remains a rarity.

Who’s policing any of this? One port of call for anyone who thinks a company is misleading shoppers is the Advertising Standards Authority (ASA). It might surprise you to know that this isn’t a public body, but the self-regulatory organisation of the advertising industry. Perhaps this explains some of the ASA’s decisions, such as its view that it isn’t misleading for advertisers to promote loaves as ‘freshly baked’ even if they were actually manufactured in distant factories, then merely passed through in-store loaf tanning salons to give them a springy crumb, crispy crust and give off the aroma of baking.

This is a view we believe to be at odds with current Food Standards Agency guidance on the use of ‘freshness’ claims. Not particularly helpfully, this guidance dropped off the FSA website when it was relaunched earlier this year. In May, the FSA assured me that it was “in the process of uploading to our new website.” Five months later, it’s still not there.  Puts me in mind of a Douglas Adams line: “It was on display in the bottom of a locked filing cabinet stuck in a disused lavatory with a sign on the door saying ‘Beware of the Leopard’”

Another issue is just how long an ASA investigation can take, as evidenced above. Innocent unless proven otherwise is the right approach, but how many more people were misled in the 16 months between our complaint and the ASA ruling?

Then there are things that you might consider to be advertising that, as far as the ASA is concerned, aren’t.  Again, the problems are endemic, but the Pret neatly illustrates so many of the issues around the woeful inadequacy of consumer protection in the UK, so we use it here as an example. Six months since the ASA ban, Pret’s ‘natural’ claim still appears like a typographical rash, on napkins, product packaging, huge wooden wall boards, even bigger window displays, and is even an element of some variants of the company’s logo.

These types of marketing, however, fall outside the ASA’s remit, which is why in December 2016, when we complained to the ASA about Pret’s use of the word ‘natural’, we submitted a parallel complaint to the Trading Standards department of our local authority. Trading Standards departments have a consumer protection role, and should work with a food business to ensure that its products are safe, properly labelled and meet other relevant expectations in terms of descriptions and promotions.

We have some sympathy with Westminster. After all, the number of Trading Standards officers has been slashed by 56% nationally since 2009. This particular council does not even have a dedicated TS department, with cases being handled by its Public Protection and Licensing department. Do these cuts explain or excuse the fact that one local authority can effectively decline to uphold high principles of consumer protection in relation to a national sandwich chain, with the potential for millions of taxpayers to be misled?

The catalogue of concerns grows. A recent national newspaper front page story highlighted that Pret’s ‘freshly baked’ baguettes are reportedly imported from a French factory, preserved by freezing to give them a 12-month shelf life and then reheated to gain a ‘freshly baked’ tag. This prompted us to contact Westminster City Council for an update on our long-running and unresolved complaint. The departmental head we’ve been dealing with for months suggested we might want to (guess what)… submit a complaint about it. You can read about this apparently endless merry-go-round here.

Where are the good food guardians?

What, then, needs to happen to protect shoppers from being misinformed or misled by food businesses?

The buck stops with the government. While many rules and regulations come from Brussels, their implementation (which includes varying degrees of interpretation and adaptation) happens at a national level. Other laws, including the current Bread and Flour Regulations 1998, are homegrown.

Since 2009, the Real Bread Campaign has been calling for an Honest Crust Act that would include:

The latest Secretary of State for Environment, Food and Rural Affairs (Defra) to decline to do any of this is Michael Gove MP. We wrote to him again last week, urging him to reconsider.

Though self-regulation and voluntary arrangements aren’t the solution, while we’re waiting for the government to pull its collective finger out, we call upon all food businesses voluntarily to make these improvements themselves. When it comes to loaf labelling, we produced this guide.

Of course, if you visit a local, independent Real Bread bakery, you may well be able to chat to the skilled staff who crafted that genuinely fresh, genuine artisan bread, and should take pride in telling you all about it.