What did 2021 deliver for children’s food?

As 2021 draws to a close, Children’s Food Campaign co-ordinator Barbara Crowther reflects on the highs and lows of the past 12 months for creating a healthier, fairer food future for children across the UK. 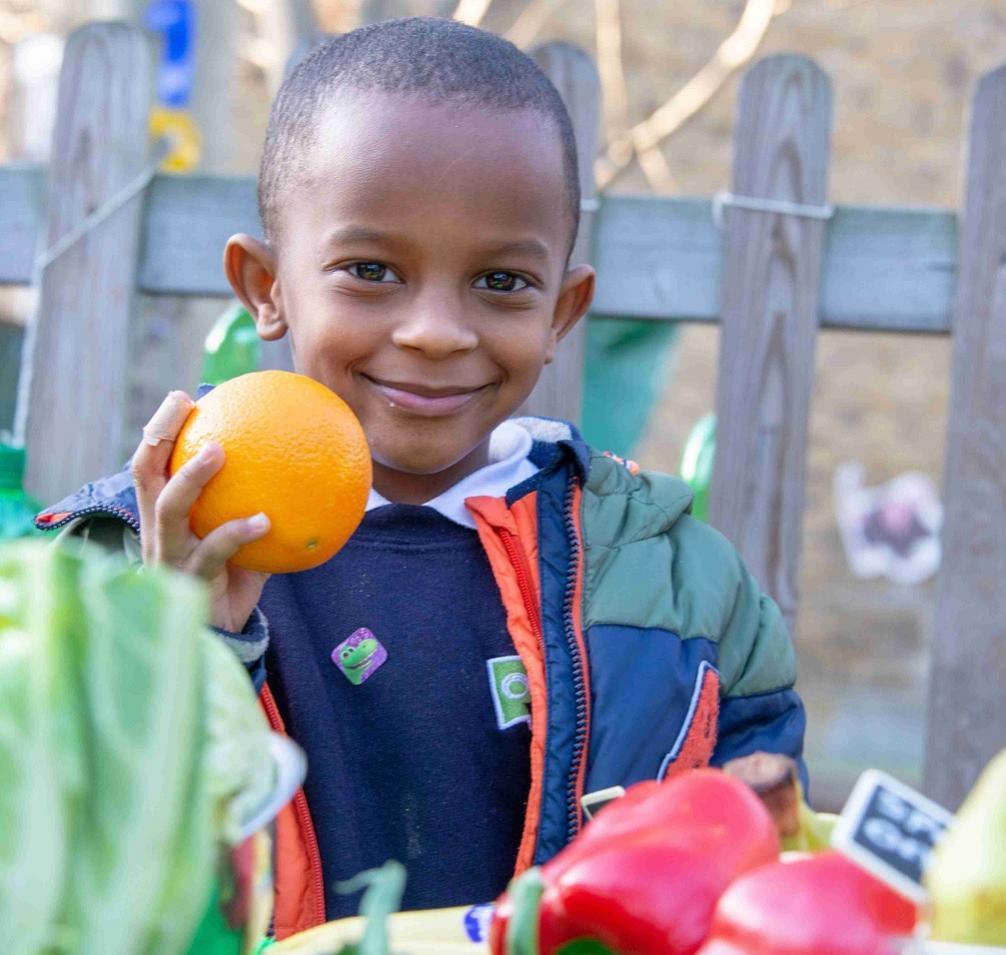 2021 has been a year of huge upheaval for children and families, for food supply chains and for local communities. Against this backdrop, it has been incredible to witness how local groups, national organisations, schools and local authorities have risen to the challenges and still made change happen. Together, we have won some important milestones towards our shared vision of a world in which all children enjoy healthy, affordable, sustainable and nutritious food and drink.

We’re thrilled that after years – decades even – of calling for a 9pm TV watershed on advertising of food and drink high in fat, sugar and/or salt (HFSS), 2021 saw Government finally draft the legislation to bring it in, including a total ban on paid-for advertising the same products online.  The plans to limit advertising are embedded in the current Health and Care Bill, which has passed the third reading in the Commons and will go through report and committee stage in the Lords early in the New Year. Once passed, the new laws will come into force at the end of 2022.

Children’s Food Campaign members and partners, including the Obesity Health Alliance, have played a major role in the campaign, bringing evidence of how children are still being exposed to a constant stream of marketing, making policy proposals, responding to consultations, mobilising public support and working with academics and Members of Parliament to win the case for change in the face of huge industry opposition to regulation.

It’s a genuine landmark in our campaign to stem the flood of junk food marketing that children are exposed to. But it remains just a milestone, not the end of this campaign. The rules do not apply to cinemas or outdoor advertising, and only cover products, not brands associated with unhealthy products. Children’s Food Campaign’s Kicking Out Junk Food report with Food Active, showed how junk food brands used the Summer of Sport as a platform for advertising and gave their products a ‘health halo’, from official sponsorship deals to player endorsements.

We and others will continue to monitor and call for further action to end marketing deals between junk food brands and sporting bodies, personalities and events. As 17 year old Jacob Rosenberg of Bite Back 2030 says, “Sport has an opportunity to put healthier options in the spotlight and push junk food totally off stage, literally like Ronaldo”.

At a local level, local authorities are also busy exploring the role that they can play. Transport for London’s Healthier Food Advertising Policy has paved the way and, according to Customer and Revenue Director Chris McLeod, the policy has worked, with companies continuing to advertise healthier options. In March 2021, Bristol became the first local authority outside London to adopt a policy, and over 70 local councils are now expressing interest in exploring their own healthy advertising policies. Watch this space!

Clamp down on less healthy multi-buy deals and shop displays

The Children’s Food Campaign has been campaigning to remove junk food from checkouts for 25 years, and in 2021, the Government has finally passed new legislation to make this happen. The regulations were passed at the end of November and will restrict display promotions of food and drink next to tills, in store entrances and at the ends of aisles, for range of products assessed as high in fat, salt and/or sugar (HFSS) according to the Nutrient Profiling Model. The new rules will apply to all types of large retailers and large sized stores, but not local corner shops or dedicated sweet shops. The new regulations also bring to an end the types of multi-buy deals (eg. 2 for 1 or 3 for £2) that encourage people to buy and consume higher quantities of unhealthy food and drinks. During 2021, we took part in several consultations and discussions regarding the details of the new rules, which will now come into force in October 2022, whilst on-pack price deals will have another 12 months to come into compliance.

Thumbs up for sugar taxes - but let's win more of them

2021 saw the long-awaited National Food Strategy. Headlining the list of recommendations is the proposal for a wide-reaching Sugar and Salt Reformulation Tax.

This would build on the existing Soft Drinks Industry Levy (SDIL), which has successfully removed 44 million kilograms of sugar a year from soft drinks in the UK. According to new academic research published in 2021 as part of the evaluation of the SDIL, this is equivalent to a 30g drop in household sugar consumption every week, adding to the case for extending these types of fiscal measures and industry levies to other types of food and drink.

Sustain’s Children’s Food Campaign was a key player in the campaign that led to the introduction of the Soft Drinks Industry Levy, and we have been calling to expand it to other products, in light of the failure of voluntary sugar reduction programmes to deliver the same level of change. In particular we want to see any new food and drink industry levy address the types of snacks that contribute very high levels of sugar and salt, but little nutrition, such as confectionery, cakes, biscuits, crisps and savoury snacks, as this blog in July 2021 argued. The National Food Strategy proposal goes much further than this, recommending that all sugar and salt purchased by manufacturers for processing of food and drink should be subject to new levies. They argue that a £3 per kilogram levy on sugar and £6 per kilogram levy on salt could trigger major reformulation capable of removing 4-10g of sugar a day from people’s diets, as well as raising up to £3 billion a year in revenues, that could then be invested in subsidising healthier food and drink for low-income families, or funding further programmes to improve people's health.

Ensuring that any income raised by a new levy or fiscal measure is invested in children’s future health is likely to be key to public support. This is something Children’s Food Campaign has consistently argued. In January 2021, our report Refreshing Investment in Children’s Health revealed that hundreds of millions of pounds of revenues from the Soft Drink Industry Levy remain unaccounted for, despite a Government pledge that ‘every penny raised will be invested in children’s health’, and we are calling for more transparency on the use of this money, estimated to be around £300 million per year.

What will 2022 bring in terms of using industry levies to speed up healthy food and drink reformulation, and raise more income for children’s health? The Government will be publishing a White Paper on Food in response to the National Food Strategy, and we want to see a commitment to a new Food Bill, bringing all aspects of healthy, sustainable, equitable and climate-friendly food and farming systems together across Government policy. In line with the National Food Strategy, we hope this will include using our tax and fiscal system to incentivise business to ‘break the junk food cycle’ as a powerful policy lever in any future food system.

Winning change on school meals - but not enough in England

Ensuring all children have access to healthy, hot meals in school has continued to be in the spotlight during 2021. We have played an active role in the End Child Food Poverty Campaign alongside many other organisations and local campaigns, and were thrilled when this campaign won the Third Sector Excellence Award for Big Impact. Schools and local authorities have battled valiantly throughout the year to ensure their children were fed, during lockdowns and then as schools reopened again. We pay a huge tribute to all the heads, teachers, catering staff and their suppliers, and all the community groups and organisations who helped make this happen.

The campaign towards universal access to school meals for all children, regardless of background, has taken a huge step forward in both Scotland and Wales in recent months. In Scotland, a cross-party consensus helped secure an expansion of free school meals to all primary school children, which was confirmed in June 2021 by the Government, with the roll-out to Primary years 4 and 5 now underway, with the remaining two year groups to follow. The commitment also includes exploration of free breakfast provision and expansion of eligibility at secondary level in Scotland, but no plans are yet confirmed. We were delighted to host Laura Meikle of the Scottish Government at our webinar on Universal School Food in June 2021, along with speakers including Andy Gold of Newham Council, one of four London boroughs currently making meals available freely to all primary pupils, despite huge pressures on local budgets.

In November 2021, a co-operation agreement signed between Plaid Cymru and Welsh Labour committed to expand universal school meals to all primary age pupils in Wales over the coming three years of the current Government. This is a major leap forward in children’s access to school meals in Wales, which does not currently offer Universal Infant Free School Meals as happens in England and Scotland. Along with our campaigning partners, we are calling on the Department for Education to initiate a major review of school food provision for England, including working towards a vision of universal food offer. Meanwhile, the 2021 Budget and Comprehensive Spending Review confirmed continued funding for the expanded national Holiday Activities and Food Programme but did not address the issues over limited eligibility for the scheme, or the partial cover it provides. The spending review also ignored our calls to expand eligibility for free school meals to more children in poverty. As Wales and Scotland roll out their programmes, children and their families in England and Northern Ireland will now lose out in comparison. In 2022, as our blog for National School Meals Week in November 2021 argues, we will continue to advocate a long term vision of universal school meals for all children, as the best opportunity to ensure healthy food, a vibrant school catering sector, an inclusive dining experience and an integrated nutrition and food education for every pupil everywhere.

Can 2022 deliver a win-win for children, health, the planet and British farmers?

Could such expansion of public food procurement also provide a win-win for British farmers and suppliers working to produce high quality sustainable food too? As 2021 draws to a close, that’s what Sustain’s current e-action is calling for – if you do one thing this Christmas, take 5 minutes to write to your MP.

What could 2022 could bring for children's food? Read Part 2 to find out!