At London Food Link we believe there are food related challenges the new Mayor of London should be tackling head on and opportunities for them to seize.

London’s next Mayor will be elected on the 5 May 2016 and will enter City Hall with fresh and bold ideas to solve the major issues facing Londoners. But where will food feature in their list of priorities?

At London Food Link we believe there are food related challenges the new Mayor of London should be tackling head on and opportunities for them to seize. They should be using their power and position to influence businesses, landowners, local authorities and, moreover, the rest of us Londoners to ensure our city is a world leader on food issues.

“Every day in London around 30 million meals are eaten. Just think about it: all that food has to be grown, harvested, transported, processed, packaged, sold, cooked, eaten and disposed of. It’s one of the daily miracles of modern life. More than half a million Londoners are employed in food businesses that turn over £20 billion every year. Within the capital you can find every diet and cuisine, something we can all be proud of.

But the food system is beginning to wreak havoc on our bodies, our city and our planet. Food-related illnesses are the number one cause of ill-health and premature death in the world. Here in London, food-related emissions are the single largest contributor to greenhouse gas emissions, bigger than all modes of transport combined. We throw away a shocking 30% of all the food we buy, even though much of it is still edible. Food banks and food poverty shame our city as does the prospect of a generation of children growing up facing a lifetime of diet-related health problems.

It doesn’t have to be like this. Cities have taken leading roles in sorting out hunger and food roblems in the past, and now we must do it again.” 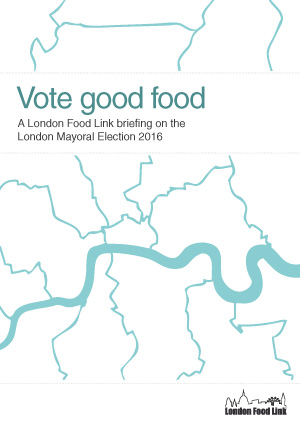