This briefing sets out joint evidence from Sustain and Pesticide Action Network UK (PAN-UK) on the risk to UK pesticide standards of accession to the Comprehensive and Progressive Agreement for Trans Pacific Partnership (CPTPP).

By acceding to the CPTPP, the UK could be opening the door to 119 pesticides banned for health and environmental reasons. The deal with 11 countries, including Australia, Canada and Mexico, risks exposing UK consumers and wildlife to a new set of toxic pesticides.

Sustain, Pan UK and trade expert Dr Emily Lydgate released a new report in June 2021 on pesticides and the CPTPP, as part of their Toxic Trade series. The report reveals that the deal poses a threat to the British public’s health, environment and farming sector.

With its proposed deal with Australia and by joining the CPTPP and its current regulatory agreement, the UK appears to be signalling that UK pesticide and environmental standards are up for negotiation. Though far from perfect, the UK’s pesticide standards are far more robust than those of existing CPTPP members.

YouGov polling released alongside the report showed two-thirds of the British public are worried about negative health (68%) and environmental (67%) impacts of lowering of UK pesticide standards by joining the Comprehensive and Progressive Agreement for Trans-Pacific Partnership (CPTPP) trade agreement.

Key recommendations for the UK government:
•    Do not allow any weakening of UK pesticide standards via CPTPP, including resisting all pressure during the accession process. This must include: » Ensuring that no currently banned pesticides are allowed for use in the UK » Ensure that food containing detectable residues of currently banned substances cannot be imported into the UK » Ensure that Maximum Residue Levels are maintained or strengthened. 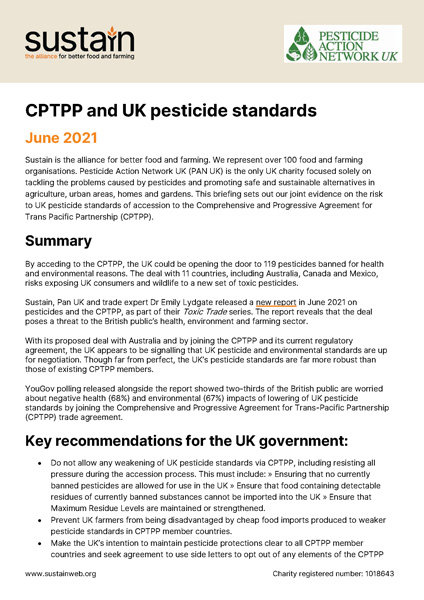