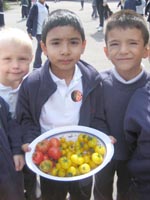 The London 2012 Olympic Games was an opportunity to promote well-being and to associate physical prowess with good food and active living. However, the Olympic and Paralympic Games are routinely associated with international brands and corporate sponsorship, and the major junk food brands McDonald’s, Coca-Cola and Cadbury had a strong presence at London 2012, particularly in the Olympic Park itself.

In the UK, we have severe problems with childhood obesity and associated health problems. We should use every opportunity we have to promote healthier food choices to young people. And what better opportunity than promoting the links between great food and heroic athletes at an exciting international sporting event? Read Sustain's critique of junk food sponsorship in The Obesity Games.

The International Olympic Committee that organises international Olympic sponsorship has long-standing relationships with food and beverage companies that promote a lot of high sugar and high fat products, namely Coca-Cola and McDonald’s. For London 2012, the chocolate company Cadbury also joined the list of food sponsors. These organisations have made some steps to improve the nutritional profile and sustainability of their range of products and practices, but there is still a long way to go, particularly in promoting more nutritious and attractive food.

Unfortunately, at most sporting and tourist venues, unhealthy food and drinks are the norm – especially food targeted at children and young people. Sustain therefore wants to see large-scale sporting events - particularly those likely to attract a younger audience or be appealing to children - champion healthier food by:

Olympic Food: Sustain ran a five-year programme of work to win healthy and sustainable food standards for the London 2012 Olympic and Paralympic Games.