“The Cocktail Effect”, a new report by PAN UK and the Soil Association, looks at the extent to which exposure to multiple pesticides is a problem in the UK, and the potential impacts on human health and the environment. 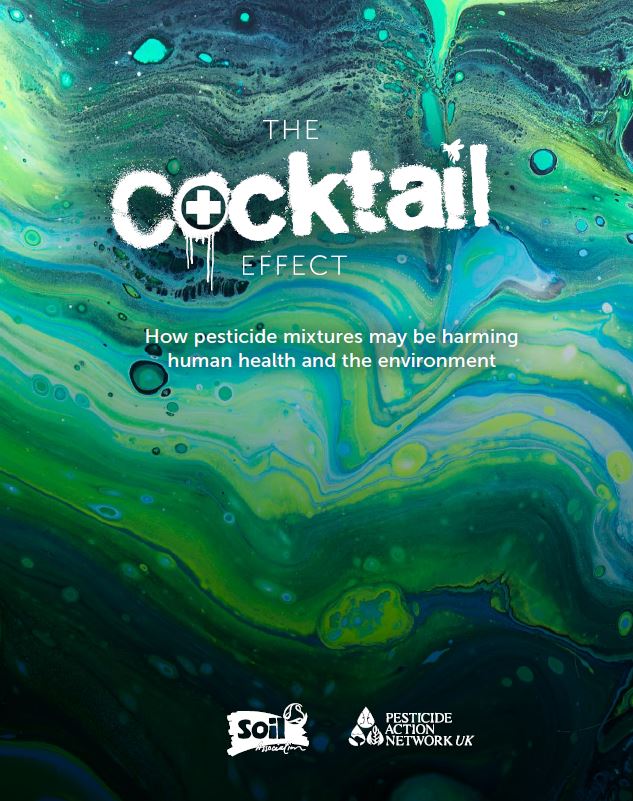 The report finds that pesticide cocktails can be more harmful than individual chemicals alone and that the cocktail effect is a significant problem in the UK. It explains the failures of the UK regulatory system to provide protection from the cocktail effect and makes recommendations for what needs to change.
It describes how the rates of pesticide applications and the toxicity levels of the pesticides used have increased in recent decades, despite the growing body of evidence that pesticide cocktails can have significantly more harmful effects than exposure to individual chemicals, both in humans and in other species such as insects, fish and birds.
In both 2017 and 2018, roughly a quarter of all food items tested by the government contained pesticides cocktails. In 2017, this included more than half of rice and a quarter of bread, and 40% of all fruit and vegetables tested. High percentages of soils, rivers, flowers and bees have also tested positive for multiple pesticides.
Despite the prevalence of pesticide cocktails and the evidence that they can be more harmful to health than individual pesticides, the UK’s regulatory system continues to assess the safety of one chemical at a time, ignoring the potential risk from eating just one item with multiple residues, let alone a meal or a day’s worth of food containing multiple chemical cocktails on multiple food items.
The complexity of the problem makes it virtually impossible to create a regulatory system that can assess, let alone provide protection from, the cocktail effect. The only way to reduce the problem is to greatly decrease overall pesticide use.
The report warns that post-Brexit trade deals could lead to a rise in the number of pesticides authorised for use in the UK and an increase in the level and variety of pesticides permitted in food. Both outcomes would increase the exposure of the public and environment to potentially dangerous pesticide cocktails.
However it also points out that the UK’s planned departure from the EU provides an opportunity to put in place urgently needed measures to support farmers to significantly reduce pesticide use and transition to agroecological farming systems using Integrated Pest Management (IPM).
Download the full report here.