The week the world rose together 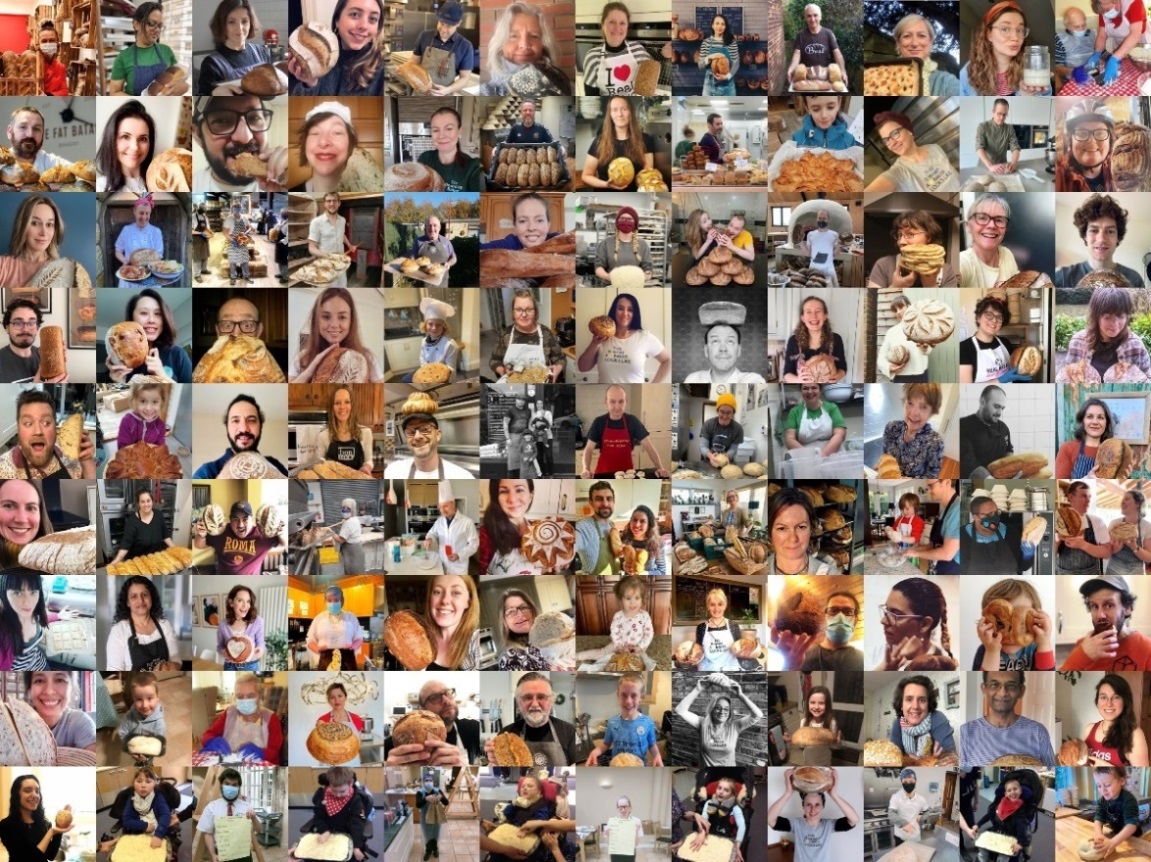 A selection from more than 120 photos we received. Credits below article

The world’s bread makers and buyers made the Real Bread Campaign’s 12th annual dough down the most widely celebrated yet.

Thank you to everyone who got involved, collected and made doughnations towards our charity’s work, and helped us to spread the word!

While the Real Bread Campaign is a year-round celebration of additive-free loaves and people behind their rise, Real Bread Week will return from 19-27 February 2022, ahead of which we’ll be running #SourdoughSeptember.

Find full details about all of our work at: www.realbreadcampaign.org

This increase of about 80% in posts and 22% in countries compared to Real Bread Week 2020 doesn’t include incorrectly tagged posts, people who didn’t say where they are, or other social media platforms! One particularly notable increase was in India, perhaps due in part to frequent posts by chef and MasterChef India host Ranveer Brar to his 1.3m followers.

Nearly 60% of Real Bread business owners who responded to our survey said that their social media following increased during Real Bread Week, and more than a quarter experience a boost in sales.

A number of our supporters seized the opportunity our Real Bread Week is - in part - designed to create by getting media exposure for their businesses and the Campaign. They included Campaign ambassador 'Bake With' Jack Sturgess, Bean & Grain Founder David Baines, Bluebird Bakery owners Nicky and Al Kippax, and Bob's Bakery's Bob Wright.

Despite various restrictions around the world, bakeries, baking schools, schools, nurseries, care homes, and other organisations created face-to-face and virtual ways of joining in and helping people in their communities to celebrate.

Students at Derwen College, a specialist centre in Shropshire for young adults with special educational needs and disabilities, joined in as part of their on-going dedication to bread making. Teacher Paula Hampson said: “The bread-making process is adapted for a range of students with different learning difficulties and disabilities. All can benefit from the process in some way, whether for their independence skills or for future employment.”

Children at Vranch House, an independent school in Exeter for children with significant physical difficulties, rolled up their sleeves and got stuck into the dough.

Campaign ambassador Jo Bottrill in Luton ran a video session for people in a local care home. Residents at Brentwood Care Centre and Barchester Queen's Court were also amongst many people towards the other end of the age spectrum getting involved.

In this time of ongoing crisis, Bake It Forward is an increasingly popular idea. Hen Corner in Hounslow, Ma Baker in Fulham and Scotland The Bread were amongst many working with their customers to make Real Bread available to people most in need of delicious, nutritious food.

The Bakers and Allied Food Workers Union invited the Campaign co-ordinator to a meeting of MPs, one of whom submitted a motion to have our Honest Crust Act proposals debated in Parliament. Please urge your local MP to sign it!

Though Real Bread Week isn’t limited to celebrating sourdough, many bakeries like Stoneham Bakehouse in Hove chose to give away starter culture, with recipes and tips, to customers.

The people behind the rise of Real Bread

From farmers to millers to bakers to buyers and beyond, people of every age, nationality, colour, sex, gender identity, sexual orientation, ethnic heritage, (dis)ability, neurological status, religion and economic background worldwide enjoy Real Bread and are behind its rise. Our #WeAreRealBread initiative is designed as a simple way for people to be included in an ongoing celebration of this diversity and more than 120 took up this open invitation during Real Bread Week.

“So good to feel a part of something so positive for so many!”
Adrian Clarke,    Clarke’s Northumbrian Catering / Northumberland County Council, England

“Thank you for giving us the chance to promote our Real Bread to a worldwide audience.”
Nicola Willis, The Bakers’ Table, Wales

“The whole Real Bread Campaign is amazing and the way the bread community can come together is fantastic. Sourdough will never cease to amaze me with just three simple ingredients.”
Jeanine Hodge, One Punch Dough, USA

“It’s great to know that there is an organisation out there championing your cause and we are looking forward to running our events again next year. We have many more ideas in the pipeline.”
Nicky Kippax, Bluebird Bakery, England

“This concept just is amazing to raise awareness of how good Read Bread is.”
Neha Chauhan, England

“It gave a focus for our community co-operative members to share their stories and content, and feel like a real community, which has been hard in lockdown.”
Angela Morris, True Food Community Co-operative, England

“#RealBreadWeek was invaluable for connecting us with local microbakeries that we didn't know about. It was great to see the Real Bread community coming together for a common cause.”
Angela Villada, Fermenti Kitchen, England

“We had our local shop place an extra order during the week when we explained the promotion.”
Sam Cornish, Bread of Haven, England

“It was a lovely way to spend time with, and do something creative with, my children. Nothing beats the look on their faces when they see the end result of all of the time and work they have put into it.”
Mike Rogers, England

“It was really fun to bake and share my fresh baked loaves every day - in real life as well as virtually on social media. I also enjoyed checking out all the other participants. At times like these it is so important to stay grounded and what grounds more than Real Bread!”
Susanne Weissenberger, White Mountain Sourdough, Canada