Quench your thirst for free in London

The Mayor of London has partnered with Refill London on a new project to cut plastic waste and encourage Londoners to drink tap water. 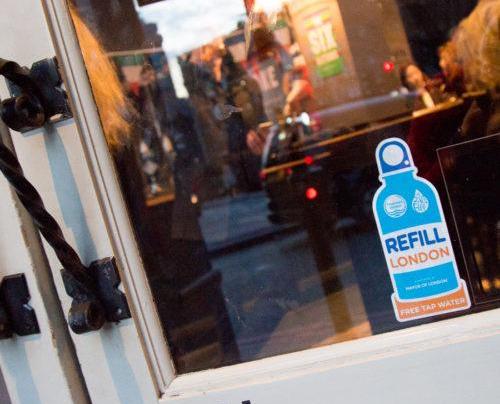 Cafes, restaurants and other businesses will be encouraged to display a Refill window sticker that says anyone can fill up their water bottle for free. An app tells you where you can fill up for free near you.

The scheme is being trialled in Lewisham, Greenwich, London Bridge City, Southbank and the Crown Estate, with the intention to roll out across the capital later this year (find the participating places at the Refill London website).

The scheme aims to make ‘drinking water more accessible in public areas’, which is something campaigners have been calling for to encourage people to drink less sugary drinks, improve hydration and, of course, reduce plastic use and waste.

London Food Link (the network behind our magazine) has supported calls for more drinking water but feel there needs to be more access to water in public spaces, as most signups so far are in private spaces; (Costa Coffee, Novotel, Canteen, Wholefoods Regent’s Street, Tate Modern, BFI Imax and Leon).

The good news is there’s an exciting second phase of the plans, as the Mayor of London plans to create a network of drinking water fountains in public spaces, starting with a 20 strong pilot scheme rolling out this summer.

Campaigners including Water For London want to see more of these refill points in public spaces, particularly across the Transport for London network. With high footfall and particular problem of hydration on London’s transport network, they point to the potential for transport hubs as a way to create lasting behaviour change.

What do you think, ‘Eel readers? The Mayor is asking for feedback on the pilot phase of Refill London, and is encouraging Londoners to comment here.

Want to read more on this issue? Check out Sustain's blog on the need for more water fountains.

Roots to Work: The Greener-Grocers