Against a rising tide of public anger and political noise demanding action on childhood obesity and plastic waste, has the time come for a rebirth of the humble drinking fountain, and could it become a positive physical emblem of the kind of country we want following Brexit? 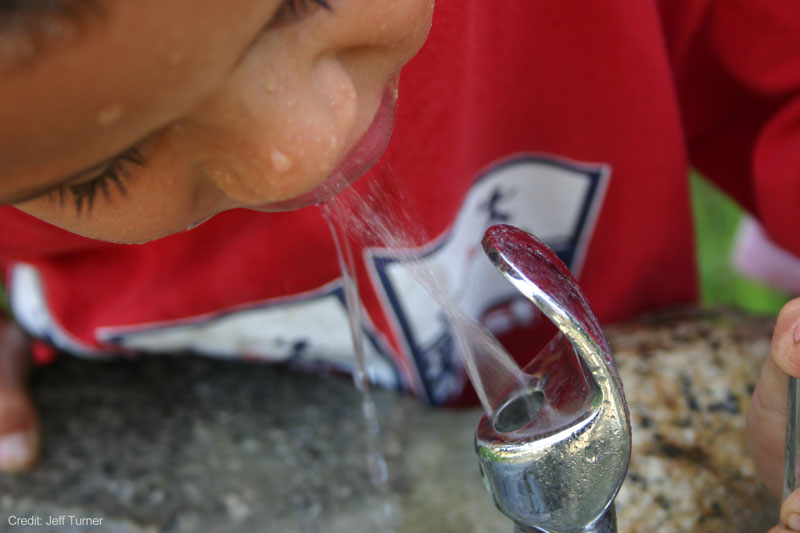 In trying to find a snappy quote to kick off this article, I was struck by how many talked about the essential necessity of water. And yet it is something that is so easily overlooked in the UK. As we are surrounded by deluges of water on an almost daily basis, and are lucky enough to have a reliable source of drinking water straight from the tap, there is often an assumption, bar the odd hosepipe ban that this is not something we need to worry about. And if there is, it’s not what I want to focus on. Rather, I think that we’re not making enough of this valuable commodity that we, unlike many other parts of the world, are blessed with.

So why, when drinking water is plentiful and cheap, do we resort to drinking bottled water shipped from all over the world (Fiji water anyone?). Sustain has long campaigned on the dark world of dodgy marketing in the food world, as much as the insanity of bottled water. Is there really a difference in taste between one bottle of water and another or indeed with tap water? Enough to warrant the price tag? You may say, if people are gullible enough to buy it, then let them. But this avoids some very big questions over plastics which have come to the fore recently, due in part to the hard work of Sustain members including Keep Britain Tidy, Marine Conservation Society, Campaign for the Protection of Rural England (CPRE) and many others. Questions around single use and non recyclable plastics that seem part and parcel (or should that be packaging) of our drinks industry – from coffee cups and straws. And bottled water shouldn’t escape this scrutiny.

Whatever your thoughts are on environmental degradation, this is something that taxpayers often end up footing the bill to deal with. The same argument can be made around obesity and dental health. Much attention has been given to sugary drinks recently, again another contributor to plastic waste. Figures this weekend for tooth extraction in children are shocking. 170 hospital tooth extractions a day carried out on under 18s, costing the NHS £36million a year. And the numbers have risen year on year for the last five years at least. As dental surgeons and the British Dental Association have pointed out, tooth decay is the number one reason for child hospital admissions, and is entirely preventable.

The sugary drinks tax that Sustain led the calls for and government efforts to reduce the sugar in these drinks through reformulation will go some way to starting to shift behaviour, but there’s still a gap in promoting, and increasing availability of, the best alternative - water. And given the considerations above, tap water.

But the remnants of the Victorian infrastructure on public drinking fountains do little to sell the concept to those considering options to increase tap water consumption. Arguments of lack of demand, vandalism and contamination abound.

But I’d like to pick these apart for the short sighted, misplaced views they are, and in turn present a vision for how, done the right way, we can turn around the fate of the humble drinking fountain. Starting with demand.

In championing the sugary drinks tax, Sustain joined forces with Jamie Oliver and other restaurateurs to trial a voluntary levy on sugary drinks with the proceeds going to a Children’s Health Fund. This scheme continues to this day and funds projects that benefit children’s health (surprisingly!), with one of the two annual funding rounds focusing on water. To date the fund has supported 34 projects, benefitting 80,000+ children. But the bigger story is those we weren’t able to fund. Over 700 organisations have approached the Fund for support to increase supply through fountains and dispensers, many in schools whose existing supply doesn’t meet the demand, for reasons including many being accessible to one age group and not another.

So the demand is there, what of the other perceived barriers.

We came up against arguments including the risk of vandalism and contamination when developing our Capital Growth programme. This supported over 2000 new community gardens in the build up to the 2012 Games, and continues to provide that support to an ever expanding network. With both vandalism and contamination the fears hugely outweighed the reality in what were often issues of public perception and attitudes to risk. But in having such a high profile scheme, backed by the Mayor of London and other public figures and influential organisations and landowners, we were able to address these concerns to a much larger audience, building up the evidence base, and providing examples that assuaged landowner and communities alike. Key to tackling the issue of vandalism was the involvement of, and leadership from, the local community. We never went in and planted a garden for a community, we supported them to do it themselves, with small bits of seed funding, advice and training and a lot of networking and signposting to others with similar aims.

Both profile and community involvement could be key to a new generation of drinking fountains. I think there's real merit in creating a new programme which, like Capital Growth, mobilises communities and, with the right political and business support, overcomes the barriers to widespread uptake of a good idea. This should be a scheme that fosters and responds to community demand for drinking fountains and refill points particularly, but not exclusively, on public land, and speaks to the strengths of the arguments in tackling childhood obesity – targeting places where children hang out. The Government’s 25 year environment plan has tasked water companies with creating a ‘nationwide network of refill points’, along with high street retailers, coffee shops and transport hubs. Although the detail on how this will be achieved is not yet forthcoming, hopefully this means that there is still time to influence their plans, and that water companies would buy in to our proposal to better link with community demand, and find some way to waive or reduce the costs of connection to the mains supply. Any such scheme will be that much bigger and effective if it draws on the strengths of the community, public and private sectors.

But there is still the problem of finance. Water fountains can costs from £2000 upwards, less for dispensers inside, which may remain the best option for some settings. Even for the most left-leaning amongst us, the days of relying on Government to conjure up money from bottomless pockets are gone. Whether the Government put forward some seed funding, as they should, there is a huge opportunity to tap into other funding that could easily triple the scale of this investment. Whilst a couple of million pounds nationally could be swallowed up quickly, thinking about a target of a few thousand pounds per community, may with the communities' involvement in fundraising, become much more achievable. Countless community projects, particularly in food, have a successful history in crowdfunding. This could be harnessed and amplified if match funding was provided by Government or even, dare I say it, corporate sponsors.

Following the introduction of the Government’s Soft Drinks Industry Levy – a rare example of a hypothecated tax – the calls for similar measures to rebalance the world so that healthy and sustainable behaviour is the cheaper or easier option are coming thick and fast. The latest which we feel is worthy of exploration is a junk food marketing levy. We joined forces with Jamie Oliver to put the case to the Mayor of London to provide global leadership by trialling this with Transport for London (TfL) advertising space, which could in turn fund fountains and refill points. As the campaign group Water for London have called for, this would help the Mayor to realise his ambitions around health and the environment, providing the money to fund this infrastructure throughout the underground and TfL transport hubs.

One of the problems levelled at drinking fountains is a lack of visibility. Whilst there may be merit in trialling another app or piece of technology where others have had limited pick-up in the past, I would argue that nothing beats simply creating more eye-catching designs. And maybe there is a role for technology in creating a fountain to meet modern needs – for drinking, refilling and pets to boot – that can be personalised by the local community, and where they have a say in defining the design e.g. to reflect a symbol of community pride, the winner of a school competition, or in partnership with a local artist. This could hark back to the ideals of William Morris in creating objects that combine aesthetic beauty and utility. Or we could look to more recent traditions and echo the iconic and popular symbolism of the red phone and letter boxes, with a wave of eye-catching red water fountains. At a time where we have a crisis over our national identity, surely red water fountains would be a better use of taxpayers' money than blue passports.

And in this context of Brexit, we need to get behind a vision of progress. Whichever way you voted, and however far off it may seem to some right now, we need some new utopias. A new physical legacy that tackles (childhood) diet related disease and the scourge of plastics would be a great start. But an ambitious plan to transform water provision in the public realm with thousands of new fountains across the country would mark us as global leaders on this issue and on a personal level would be the kind of thing that would make me proud of what we as a country stand for.