Sustain were one of 26 organisations supporting a new survey of farmers which revealed that a healthy environment is a key business asset for four out of five farmers. It also showed that a third aren’t taking environmental action and that lack of access to capital, a harsh market, and uncertainty over Brexit are big barriers. Farmers and nature experts are united in a call to the Government for an ambitious agriculture policy which must have the environment at its heart. 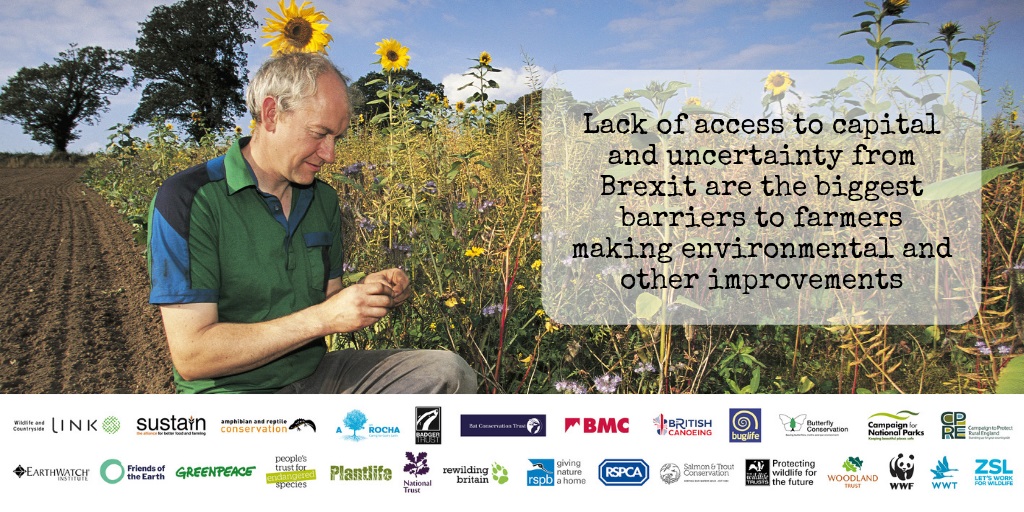 A major survey of farmers’ attitudes to changes in the Government’s agricultural policy [1], shows that English farmers recognise the need for the environment and animal welfare to be prioritised in future Government policy, and acknowledge the key link between a thriving natural world and successful farming. The in-depth research showed 80% of farmers believe the health of the natural environment is important or very important for their farm business.

Pollution prevention is rated by most farmers as deserving Government funding in future farming policy, with more than half of farmers (56.2%) believing that activities which prevent pollution should be supported. Animal welfare (50.4%), habitat restoration (41%) and biodiversity conservation (38.2%) all ranked more highly than food productivity and competitiveness, which 38% said should be prioritised. Soil conservation and protection of crop, tree, plant and bee health were ranked closely behind at 37.2% and 35.0% respectively.

Further key findings from the independent research with 500 farmers, carried out on behalf of environment and animal welfare charities, reveal that:

Please see the research report and dataset for more detail and further findings.

Helen Chesshire, Senior Farming Advisor at Woodland Trust and Chair of Wildlife and Countryside Link’s Agriculture Group, said: ‘Farmers and conservationists are on the same page overall for the future of farming. Farmers are key guardians of our environment, and this research shows they know it is vital to our farming future to prioritise fixing the natural resources which farms rely on. With more than double the number of farmers in favour of public money for public goods than are against it, this research is a clear vote from farmers for keeping a strong environmental focus in future farming policy and legislation.’

Thomas Lancaster, Acting Head of Land Use Policy at RSPB, and Vice-Chair of Wildlife and Countryside Link’s Agriculture Group, said: ‘Farmers know fertile soils, clean water, pollinators and other natural resources, are essential to their businesses and they want to protect them. But this research shows lack of access to funds and uncertainty over the future, particularly around Brexit, are major barriers which are preventing farmers from doing more for our natural world. Farmers and environment charities are united in wanting certainty over future funding for nature-friendly farming This is key if both nature and farming are to survive and thrive.’

David Bowles, Head of Public Affairs at the RSPCA, said: ‘With animal welfare the second highest priority for farmers in future funding, the importance of animal welfare to farmers and their businesses is clear. Ensuring nationally that farmers are provided with financial support to rear their animals to higher welfare standards and keep them healthy is vital to establishing a healthy and sustainable food production system and must be recognised in law and Government policy.’

The Agriculture Bill, awaiting its next stage in Parliament, gives us a once in a generation opportunity to fix our broken farming system, a system which has incentivised unsustainable production for years. Putting the environment at the core of public funding for farming is key to delivering public goods, including: clearer air for us to breathe; cleaner water to drink; sustainable, responsibly-produced food to eat; and enhancing the treasured wildlife, plants and landscapes we all enjoy and want to access.

26 environment, access, and animal welfare charities [2] are therefore calling on the Government to:

A sample of 500 farmers across England were surveyed between 1 November – 10 December 2018, through a combination of telephone and face-to-face interviews and written/online questionnaires. Responses were weighted according to up-to-date farm census data for England.