Marks & Spencer's commits to full fish sustainability by 2015, and contributes over £1 million to WWF to protect fish, seas and coastlines across the world.

Marks & Spencer's 'Forever Fish' campaign, launched today, will contribute over £1 million to the work of conservation charity WWF to protect fish, seas and coastlines across the world.

(1) Safeguarding UK seas - some of the busiest and most threatened in the world. The new funding from M&S will boost our work with government, industry and other stakeholders to ensure our seas are managed better - so fish stocks can recover and threatened species such as dolphins and harbour porpoises have a safe haven.

(2) Securing a future for tuna - stocks of some of the most commercially valuable tuna species are dangerously low. Extra funding will help us highlight and tackle some of the biggest challenges facing tuna, such as illegal, unregulated and unreported fishing. 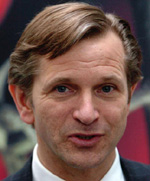 (3) Protecting marine diversity off east Africa and in the Coral Triangle - home to some of the world’s most fabulous sealife. M&S will be supporting our work with governments and communities to establish marine protected areas, countering threats from overfishing, climate change and the unsustainable development of tourism.

Marc Bolland, Chief Executive of Marks & Spencer (left), said: “We will work together with our customers, our people and their children to promote a healthy future for our beaches, seas and fish. Forever Fish involves schools, charities, fishermen and fisheries so that we can all enjoy cleaner beaches, more sustainable fishing and healthy fish.”

As part of the Forever Fish campaign, WWF will be supporting other environmental commitments by M&S, such as:

How the Forever Fish campaign will be funded

M&S is funding its Forever Fish campaign by donating profits from its 5p carrier bags. From 22 June, you’ll find bags in M&S stores featuring WWF's panda logo and that of the Marine Conservation Society (MCS). These charities will both receive 40% of the profits from the sale of the bags to support marine conservation efforts in the UK and around the world.

As well as contributing to WWF's work, M&S’ Forever Fish campaign will fund efforts to encourage as many people as possible to join in the MCS’s Beach Watch clean-up programme. And it’ll provide money to the National Schools Partnership so it can create an education programme for 3,000 primary schools around fish, fishing and marine life.