Thornton's Budgens is supplying surplus food to a nearby Centrepoint shelter 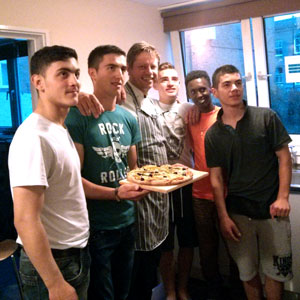 TV chef and local boy Oliver Rowe has visited the homeless young people at a Centrepoint hostel in Camden to get them turned on to turnips and clued up with cucumbers.

Oliver, who starred in a BBC documentary about his Camden-based restaurant, said: “I think cooking is an essential skill, it’s a key part of self-sufficiency and it’s an important element of what’s being done here.

“We wanted to choose dishes that could be easily adapted, depending on what is available. Staff from the hostel collect surplus food from Thornton’s Budgens, a local supermarket. This means they’re provided with a changing palette of flavours and ingredients. Hopefully, when they get vegetables now, they don’t say ‘I don’t know what to do,’ but think, ’Actually, we could make a soup, a pizza or salad.’”

In the first of a series of healthy eating classes Oliver taught his would be sous chefs how to make a pizza, soup and salad, giving them the sort of hands on cooking experience they will need to live independent and fulfilling lives.

Arijana Todorovac, who works at the Centrepoint hostel, said: “Getting our young people interested healthy eating is an important part of the work we do at Centrepoint. Having someone of Oliver’s standing and expertise is an added bonus. He has definitely inspired our young people tonight; there were some very determined new chefs out there.”

A recent survey of young people supported by Centrepoint revealed that around 50 per cent struggle to maintain a healthy diet on a low income, citing a lack of cooking skills and the availability of cheap fast food. More than 50 per cent also reported irregular eating patterns, with some young people eating just one large meal a day.

The food was donated by Thornton’s Budgens with support from the FoodSave project, an initiative helping small and medium-sized food businesses in London to reduce their food waste. FoodSave is a Greater London Authority programme delivered by the Sustainable Restaurant Association and Sustain. The programme is funded by the European Regional Development Fund, London Waste and Recycling Board and the Mayor of London.