Outspoken Delivery, a cycling courier company based in Cambridge, has been helping FoodCycle Cambridge to collect surplus food for their weekly meal since 2012. 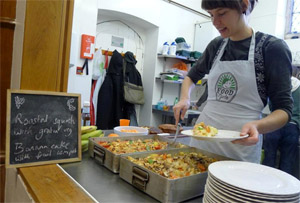 Volunteer-run charity, FoodCycle Cambridge, turn surplus food that would otherwise go to waste into a weekly three-course meal for people at risk of social isolation and food poverty. When FoodCycle sent out a plea on Twitter for help to pick up the surplus food after their bike was stolen in 2012, Outspoken jumped (or rather pedalled) to the rescue. This has been a weekly arrangement between the two organisations ever since.

Every Friday at 4pm, a FoodCycle volunteer meets a member of the Outspoken team along with one of their cargo bikes at Sainsbury’s. Surplus food that the shop has set aside is loaded into the cargo bike and cycled 2 miles across the city to the community kitchen, via local shop the Cambridge Farmers Outlet, ready to be turned into a nutritious community feast the next day. 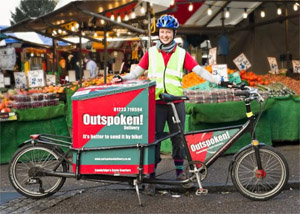 The partnership between FoodCycle and Outspoken has been a huge support to the charity, enabling them to efficiently and reliably collect donations of surplus food which had previously been a struggle. Outspoken Delivery do it because they think it’s a great cause. Since they started working together, Outspoken Delivery have helped FoodCycle to save over 1120kg of good food from going to waste, which has been turned in to over 3360 meals for people who need it.