The University of Winchester pledges to use sustainable fish

Sustainable Fish City is focused on supporting London's citizens, caterers, food businesses and institutions to buy and serve sustainable fish. However, our ambition has always been much bigger. We thought we should try out our approach in one city - London - before seeking out new friends in other towns and cities to join in.

However, we were delighted in summer 2011 to receive our first signed Sustainable Fish City pledge from another town - from the catering manager at the University of Winchester in Hampshire. Because fish sustainability is so very important, we hope that Sustainable Fish Cities, towns, villages and communities will spring up all over the UK. By signing up, the University of Winchester has inspired us to start thinking about how this might spread.

Established in 1840, the University of Winchester has 7,000 staff and students. Its mission is to educate, to advance knowledge and to serve the public good, so adopting a commitment to sustainable fish puts that mission into practice.

Contacting the campaign in summer 2011, University of Winchester Catering Manager Dave Morton said, "Although Sustainable Fish City is based around London it is important that as many Universities and businesses support the campaign as possible. We would like to be part of this rolling out nationally." 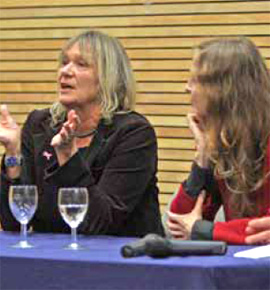 In October 2010, the University celebrated LIFE Week, a programme of events marking the formal launch of the University Catering Department’s Ethical Procurement Policy.’LIFE’ stands for Local, Independent, Fairtrade and Ethical. LIFE week included a series of food-related
events and activities on campus, such as a hog roast, local ale tasting and stalls by local
suppliers in the Food Hall.

A key event was the screening of End of the Line, an eye-opening documentary about the overfishing of the world’s oceans. The University welcomed the film’s producer Claire Lewis to attend. She was joined for a Q&A after the screening by Caroline Bennett, Managing Director of Moshi Moshi, one of only seven seafood restaurants in the UK to have received formal accreditation from the Marine Stewardship Council. Caroline also sits on the working party of Sustainable Fish City. Claire and Caroline are shown speaking to the audience in the picture on the right.

Claire explained to the university audience that reading the book End of the Line by Charles Clover changed her life. According to Clover, she said, the scale of the problem is such that “like climate change, it cannot wait, we must act now.” The film presented some staggering facts:

Claire and Caroline are convinced that improvement will have to come from below, as a grassroots development, and their respective film and restaurants have an important role to play in this: “Only by informing the public, effecting a change in people’s behaviour and putting pressure on politicians, can we bring about real change,” said Claire.

Caroline added, “I’ve come to the conclusion that the topdown approach doesn’t work. For the public to demand ethically sourced fish is music to my ears – please be vocal.”

As a result of such concerns, the University of Winchester says that it is "committed to monitoring the sourcing of its fish supply and never purchases fish from the Marine Conservation Society's list of species to avoid, only buying those that can be sourced sustainably". The University of Winchester was subsequently awarded a 1st Class commendation from the People & Planet Green League 2011, ranking an impressive 22nd in the whole country for its green and ethical policies and practices. We are delighted that sustainable fish was one of these, as part of the university's ethical procurement policy. Read more in the university newsletter.

Find out more about the University of Winchester on its website: http://www.winchester.ac.uk