In 2010, Chris Young spoke to Caroline Conran, one of the people behind the 1980 Campaign for Real Bread, run by The Sunday Times.

For thirteen years, Caroline Conran was The Sunday Times’ cookery writer. I met her at her son Tom’s eponymous deli on Westbourne Grove, London, where she shared her recollections of campaigning for Real Bread, including what she thought of Elizabeth David’s home made loaf.

On 13 January 1980, Michael Bateman, editor of the Lifespan section of The Sunday Times, along with Caroline and the paper’s medical correspondent, Oliver Gillie, launched a Campaign for Real Bread.

As The Vegetarian Society had been running a campaign for Real Bread since 1976, I wondered why The Sunday Times had felt the need to start one of its own.  “To take it to a wider audience,” Caroline replies, echoing the words of Bateman. In his introduction to The Sunday Times Book of Real Bread, he says that the aim was to expand on the work promoting wholemeal bread being done by the existing campaign by raising the profile of all good bread.

The 1980 campaign succeeded and over the course of the year, campaign organisers Susan Campbell and Sue Rasmus answered over 5000 letters from supporters. They were asking for advice, expressing indignation at the state of labelling, being angry about how the government did nothing to support healthier bread, and airing frustration at the fact that good bread was not available in institutions such as schools. *Sigh* how times don’t change.

Understandably, with such a high profile, the campaign also attracted the attentions of some institutions less keen on the initiative. “They took us to lunch and asked could we please not do this,” Caroline recalls of an early encounter with representatives of the Flour Advisory Bureau (FAB).  While I’m wondering how I can get the FAB to take me to lunch*, Caroline opens A Delicious Way to Earn a Living, a collection of Bateman’s food writing, published by Grub Street in 2009 after his untimely death in 2006.  She opens the book at a transcript of a 1980 article from Lifespan and slides it across the table to me. The piece features Professor Brian Spencer, the then head of the Flour Milling and Baking Research Association (FMBRA), the organisation best known to many for creating the Chorleywood Process.

“It is wrong of you to say some bread isn’t good,” Spencer is quoted as saying.  “A lot of people aren’t desperately well-educated, and if they don’t like brown bread, they may cut down on bread and eat less nutritious foods.”  Why, with those words, did the image of a white sliced factory loaf float through my mind? I then laugh as the professor goes on to admit that there's a distinction between the plant-baked loaves his outfit invented and “…the better tasting loaf which I prefer…” Brian, here in 2010, we’d call that a PR fail.

“We thought all of their objections were crazy,” says Caroline. “People were eating less bread because it was so awful and we were just trying to make bread better so that people would eat more of it. They stood to sell more.”

During the year, the campaigners made trips around the country, including attending an FAB course on which Caroline learned how to boost a loaf with ascorbic acid. “You need to be a chemist to be a plant baker,” she says, also visiting FMBRA’s Chorleywood lair, and interviewing bakers, millers and other Real Bread aficionados.  One of these was the much revered food writer Elizabeth David, who in 1977 penned English Bread and Yeast Cookery, still held by many as one of the most authoritative books on our bread. “I have to say that her bread was pretty awful,” Caroline confides to my surprise. “It was tight and too salty, it had a kind of surly quality.”

Though the 1980 campaigners dropped a plan to open their own Real Bread bakery:  “we thought that getting up at four a.m. was too hard,” Caroline’s involvement stayed with her long afterwards due to a friend’s husband handling the FAB’s PR account. “She didn’t speak to me for ten years,” she laughs.

I ask Caroline what she thinks The Sunday Times initiative achieved and what the current Real Bread Campaign can learn from it. “It was all part of a movement away from manufactured food. I think we were successful, in a middle class sort of way. One always hoped that it would percolate outwards from there, which I suppose it has in some way. Then again, I went to Hungerford recently and looked for a baker but there wasn’t one. Tesco had moved in.”

Clearly, Caroline has little time for the big players. She tells me that shortly after Tom’s Deli opened, a minion of one of the multiples was spotted “poking around” the independent eatery.  The initial excuse was that the national retailer wanted to keep abreast of current trends but when pressed, one of Caroline's friends further up in the company confessed that they wanted to stock the products and shut the deli down. “Supermarkets are really quite aggressive to small businesses,” she concludes.

So what are the best things that we all can do now to help improve the standard of bread? “Patronise a local baker, rather than supermarkets. Somehow, they have these rolls of dough they bake and it smells quite nice but it’s a complete mirage. You need to share with people what they’re missing out on.“

I leave Caroline to pick up a few bits and bobs from the deli, while I make my way back to Real Bread HQ, still in shock at the revelation about Ms David’s baking.

A tiny loaf for two 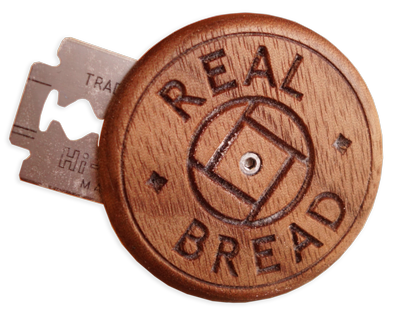