In the year when nurturing a starter became a popular pastime, the Real Bread Campaign’s annual, international was celebrated more widely than ever before. 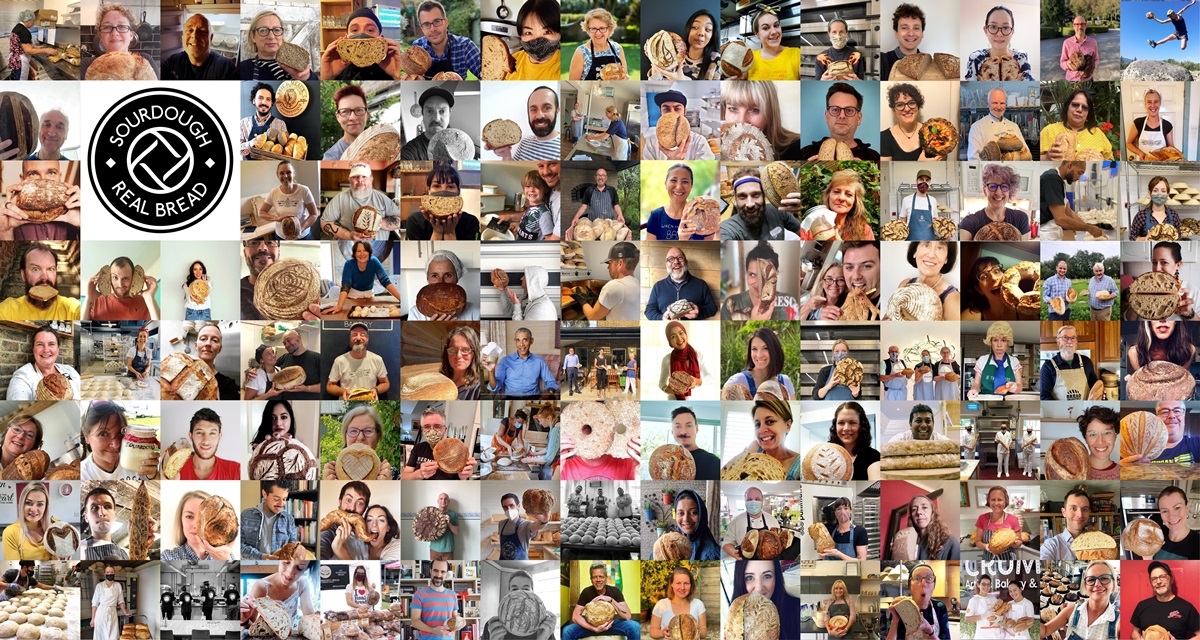 The 100+ sourdough selfies that were emailed to us during the month. Montage CC-BY-SA-2.0 www.realbreadcampaign.org. See below for individual photo credits

There’s no way to know just how many people all around the globe took part. One indication of its global popularity, however, was the more than 5700 social media post from nearly 60 countries* we saw – and those were just the Instagrammers who used the right hashtag!

See the 100+ people who emailed their sourdough selfies to us during the month.

Our initiative also generated international media coverage from England to the USA, Scotland to South Africa, Ireland to the United Arab Emirates, and other places between and beyond.

Of respondents to our post-event survey:

PLEASE help us update and add to this list by completing our survey before 16 October!

Highlights of the fun and fundraising around the world included:

PLEASE help us update and add to this list by completing our survey before 16 October!

Give us your dough!

If you enjoyed Sourdough September and want to support the charity behind it, please:

... and Sourdough Slingers t-shirts are still available from Campaign ambassador, and The School of Artisan Food’s head flour arranger, Wayne Caddy. He's kindly making a doughnation to us for each one sold. To place your order, drop Wayne a line at: sourdoughslingers@thecaddys.com

“I’ve pushed Sourdough September as much as possible for our market stalls and sales have been excellent at all three events in the month. Last Hexham event sales [...] a big success. Your hard work is very much appreciated by us real bakers” Andrew Smith, Bread and Roses and Campaign ambassador, England

"I think is really useful to spread the word about the benefits of consumption of Real Bread and mitigate taboos about bread." Natalia DelPozo, Ecuador

“I thought it was lovely. It was great to see the mosaic of selfies grow and lockdown has meant sourdough has gone from something done by (mostly weirdo) nerds like you, me and the rest, to something all sorts have at least tried.” Justin McAteer, homebaker, England

“I'm really happy that there's a month where we get to celebrate Real Bread and raise awareness for what it's all about” Phoebe Baker, homebaker, England

“It's a great way of spreading the message of the Real Bread Campaign and making more bread-eaters aware of genuine sourdough.” Peter Doughty-Cook, Peter Cooks Bread and Campaign ambassador, England

"I used it as a motivator to push me to launch a new business. I'm just grateful that you run these, as they motivate us to at least TRY and get out there with a bit more energy and initiative, although we may not always manage it." Maggie Rich, Off the Rails, England

“I think it is a great way to promote sourdough and helps people get in to the baking industry.” Stephen Collom, The Baking Brothers, England

"I like the idea of making sourdough bread more mainstream. Bread comes in many shapes and form, I get that some people might find it stupid to pay more for bread than a coffee but at least that might give them a better understanding as to why that is." Mathieu Carpentier, England

"I was so delighted that we were able to participate in Sourdough September this year. It makes my heart glad to think of sourdough loaves proving in little flats in Gorbals." Catriona Milligan, Bridging The Gap / High Rise Bakers, Scotland

Sourdough September will return next year, before which Real Bread Week 2021 runs from 20-28 February.

In (roughly) order of receipt, thanks and ©:

Get Ready for Real Bread Week