The latest development in the Fringe Farming project happened last week when its fifth and most recent local partner, Food Cardiff (part of Food Sense Wales), facilitated a multi-stakeholder event in Cardiff last week to build alliances and discuss what can be done to promote local food systems. 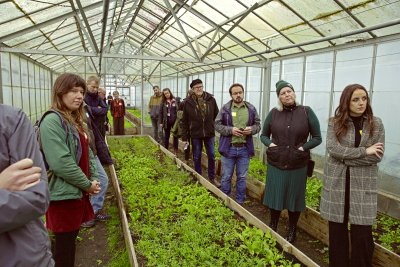 On 15 November, our Fringe Farming partner, Food Cardiff (part of Food Sense Wales) held a Cardiff Fringe Farming Stakeholder Workshop. Food Cardiff is a city-wide partnership of individuals and organisations. It acts as a hub for connecting the people and projects working to promote healthy, environmentally sustainable and ethical food across the city; it acts as a voice for wider change.

The discussions and networks made from the event will feed into a report that will lay out a local action plan for agroecological food production in and around Cardiff.

Update: A Cardiff Fringe Farming action plan report came out following this meeting in time for a joint Sustainable Food Places - Fringe Farming webinar on local government support for fringe farming, which was held on 12 December. Included in the panel was our Cardiff partner, Pearl Costello, presenting the key asks from the report.

Its central aims were namely to:

The event was held at Bute Park Visitor Centre next door to Cardiff Salad Garden, which was shown to be a marvellous food growing enterprise with multiple public benefits, such as care farming, beyond providing the city with local, fresh, healthy greens.

The attendees were diverse, including farmers and growers, industry bodies and unions,  Cardiff  Council representatives, and several people from third sector like WWF Cymru and Our Food 1200, which is an impressive initiative that aims to match landowners with land seekers to create 1,200 acres of regenerative horticulture.

This made for lively and wide-ranging discussions, which were non-stop and barely contained within the half day participants were together. The barriers to peri-urban farming, or local food production in general in the Cardiff region - accessing land, skills training and start-up capital, and improving farmer working and living conditions – were shared. Nonetheless, there were differences and nuances in what individuals judged to be the priorities and mechanisms that we should be targeting to reach our common goal.

For somebody like me who is based in England and works on a project that has a tendency (which we are fighting!) to be Westminster focused in terms of framing the political landscape, it was refreshing to be exposed to the Welsh context. I found that the urban regions in Wales may have the opportunity for closer collaboration with their surrounding regions and national government than in England.  It seems quite easy to speak and work across these supposed borders, even in an event looking at local food infrastructure. The implications of this could be for Food Cardiff activities of the Fringe Farming project to have wider impact and implications than the X (e.g. 5) km of hinterland surrounding Cardiff city. 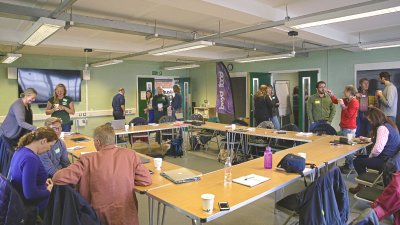 Other pertinent points that came out of the day included the multiple competitors for land: from housing to wildlife/biodiversity (it was said that 20% of land is to be put aside in Wales) and carbon sequestration schemes (usually this means planting trees). Land is therefore scarce, which makes it incredibly difficult to acquire new land for farming, or at least at a reasonable cost. Added to this is the issue that the value of land given to agriculture is misrepresented when we only look at the returns its harvested yields generate.

The public goods that agroecological farming can generate, including for our diets, local communities and environment are not well known or are overlooked. Therefore, unless a farmer inherits their land or has access to a significant amount of money that can compete with development projects whose financial returns are high and straightforwardly known, then the routes to farming are tenuous.

This led to another subject of debate, i.e. land tenancy. Even though renting farmland seems to be the logical step when buying land is unrealistic, it is not without its complexities and crucial considerations. A primary one is the need for housing. A farmer needs to be by their crops and livestock all year round, yet a lot of tenancy agreements do not allow basic infrastructure for living.

Tenancy agreements tend to be risky for farmers also, with things like a three-year break clause that mean a landowner can evict tenants after a three-year review. At the same time, these are put in to address the risks to landowners of having an irresponsible or otherwise unsuitable tenant farmer. Solutions that the room gave to this conundrum were for farmers to draw up good business plans, and for fair and honest negotiations and conversations to be held between the two parties before any agreements were entered.

The participants observed that there are more people wanting to farm than there is land for them to farm. They suggested turning to governments (local, regional and/or national) and policy to look for support. It seems the Government are saying some of the right things and even trying to do some of the right things, but how do we get that rhetoric and action into policy?

Update: A Cardiff Fringe Farming action plan report came out following this meeting in time for a joint Sustainable Food Places - Fringe Farming webinar on local government support for fringe farming, which was held on 12 December. Included in the panel was our Cardiff partner, Pearl Costello, presenting the key asks from the report.

You can read the Cardiff Fringe Farming report here 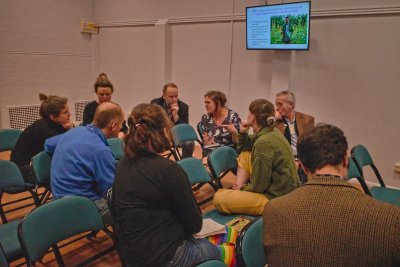