They bought, they baked, they boosted 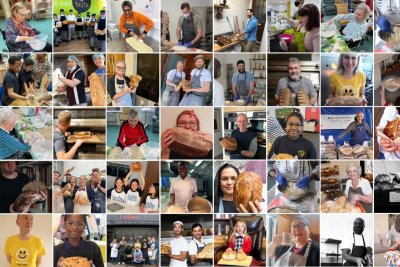 #WeAreRealBread for #RealBreadWeek 2022. Copyright details below.

The Real Bread Campaign’s annual, international initiative saw people around the globe get behind the three main aims of the week by buying Real Bread from local bakeries, baking their own and boosting the charity behind the Campaign.

Of more than 100 bakery and baking school business owners who responded to the post-event survey:

Of 70 other people who responded, 54% said the week inspired them to make bread, while 16% found a Real Bread bakery they didn’t previously know about and 13% bought Real Bread from a local, independent bakery for the first time.

During the 10 days, 194 people either became Real Bread Campaign supporters or renewed their support, while others made doughnations, bought the Campaign’s books or Real Bread gifts.

Real Bread Week 2023 will run from 18 to 26 February and Sourdough September's there for you every year.

Time’s running out to buy
The limited edition ‘Real Bread for life’ smiley design t-shirt, apron and mug are only available until 15 March 2022.

Take a look and buy now

An initial look at survey feedback makes it clear that we still need to work on how we communicate.

We began promoting Real Bread Week 2022 in March 2021 via the dedicated webpage and news items on our website, enewsletters, emails directly to business owners, our supporters’ magazine, our supporters’ forum (and other Facebook groups), frequent posts across a range of social media channels and media coverage secured by our PR work.

Despite all of this, a number of respondents said they didn’t have enough notice (or even were not aware) of:

We will be reviewing the survey feedback in further depth to look at ways we can make our initiatives more beneficial to bakers and other people we run them for.

If you have any suggestions of ways we could improve our communication to supporters and other friends, please let us know!

“We definitely had more customers in the shop interested in finding out what Real Bread was all about.” Rob Paton, The Fat Batard Bakery, Scotland

“It's a struggle at the moment, but Real Bread Week gets me inspired and makes me remember why I get up early to bake!!” Kelly Davies, South By West, England

"It has been an amazing event." Julia, CHEF Ortiz, Mexico

“Thanks for all your hard work. All the social media coverage definitely got people talking about it here in Wales that weren't already aware of it.” Tom Baker, Rye and Roses, Wales

“It's great to be part of raising the profile, together, of that which we believe in.” Sara Ward, Hen Corner, England

“Would love to see this movement in the US.” Kristin Ryall, Bread and Flours, USA

“I thought it was very visible on social media - the Instagram team did great!” Daisy Pound, Gritstone Microbakery, England

“It’s always a positive and celebratory experience. Enjoyed finding out more about other bakers and their baking.” Sonya Hundal, Greenfield Bakers, England

“I think it's an amazing awareness campaign, a lot of people don't know what goes into their bread.” Sylvester Spinelli, Elis Bakery, England

“It is lovely to feel connected with a global network of folk who appreciate Real Bread!” Catherine Vulliamy, Conquest of Bread, England

“It’s a good chance to explain to people in our community how what we do is different and better. We do say this the whole time, but having an event validates and gives a focus to it.” Caroline Stephens, Rex Bakery, England

”It's a great chance to shout about how great Real Bread is.” Emma Williams, Y Felin, Wales

"It is a great way to boost engagement with our community around the benefits of buying/baking/eating Real Bread, what we do and the work of the Real Bread Campaign." James Thorn, Wild Bread Bakehouse, England

“Sadly this year this event was overshadowed by events developing in Ukraine, but bakers pulled together to show their humanity and raised awareness of Ukrainian culture and bread played a core part of it. Food doesn’t have boundaries and bread connects us all.” Eszter Faulkner, The Little Sourdough Bakery, England

“Real Bread Week was a great opportunity to get in touch with other bakers, find out about their businesses and their products and get to meet them face to face.” Sharon Graham-Law,    Sunset Bakehouse, England

“It was great. We gave away 200 bread baking boxes to kids and to charities. more please.” Greg, Britain Loves Baking

“Thank you for your hard work. Real Bread Week definitely gives businesses like us a boost, with national press aware and posting, locally we get some greater awareness.” anon

“It’s a really good focus to bring people together and provides a great hook for local bakeries to promote themselves.” Mark Ellis, England

“It has inspired me to get back on the path and address my 'not so successful’ bakes!”

“Go you! You're doing a really valuable educational role, and I hope you can continue to help, grow and promote!” anon

“I applaud all your efforts. A week's focus is a really good thing to do.”