The Advertising Standards Authority has found Ben and Jerry's Moophoria ads broke rules designed to protect children from unhealthy food advertising. It is the sixth complaint by Children's Food Campaign to be upheld in just 12 months. 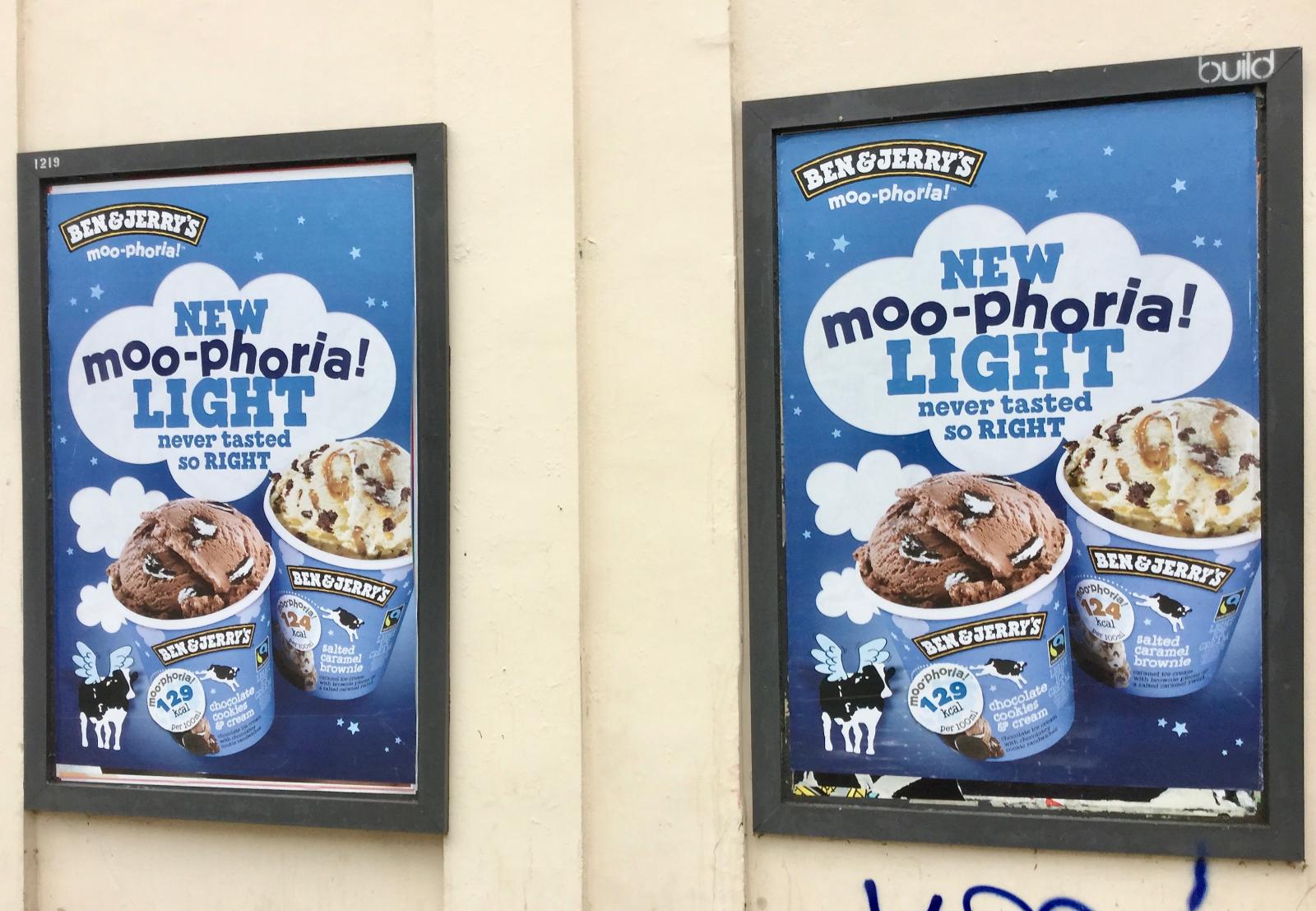 The food company Unilever, owner of Ben & Jerry’s ice-cream, admitted to the Advertising Standards Authority that posters advertising Ben & Jerry’s Moophoria ice cream broke rules meant to protect children from unhealthy food marketing, following a complaint from Children’s Food Campaign. Two adverts for the ice cream were found on separate sites in London close to a primary school and a secondary school respectively in March 2019, but it took the advertising regulator four months to reach a final decision on the case.

According to rules established by the industry self-regulator, the Committee for Advertising Practices (CAP), companies are banned from advertising food or drink high in fat, salt or sugar (HFSS) directly to under-16s. The Children’s Food Campaign, who reported the latest cases to the Advertising Standards Authority, believes that there is a systemic failure of due diligence in relation to online and outdoor advertising, with several cases upheld by the Advertising Standards Authority in the past 12 months, and several more rejected due to ongoing loopholes in the rules that still allow advertising outside nurseries, childcare centres and playgrounds, or on online sites if children are estimated to constitute less than 25% of the total audience.

“This the sixth time in just 12 months that the ASA Council has upheld a complaint we’ve submitted. It’s good news that they have found against Ben and Jerrys, but it should not fall to the Children’s Food Campaign to police the rules on advertising junk foods to children. The ASA’s system of gently rapping knuckles long after a campaign has finished is clearly no deterrent to these enormous multi-national companies. When there are no penalties for breaking the rules, then there is no incentive to abide by them. Something has to change.”

The latest breach of advertising rules comes hot on the heels of research published by the Advertising Standards Authority itself on 6 June 2019, in which three ‘child avatars’ uncovered 947 examples of HFSS food and drink advertising in one two-week period. Companies who were found to have breached the rules and allowed their ads to run on dedicated children’s websites or children’s channels on YouTube included Asda, Kellogg’s, KFC, KP Snacks, Lidl, McDonald’s, M&S and Pringles. Ads in breach of current regulations were found on one third (13 out of 39) dedicated children’s websites, and on 55 out of 87 YouTube channels watched by children.

“The Advertising Standards Authority’s own evidence shows that there are literally hundreds of ads being served up on a weekly basis to our children. Companies are failing to do proper due diligence, and in particular YouTube, which is the favourite ‘screen time’ channel for millions of children, is not regulated and monitored enough. That’s why we need a comprehensive 9pm watershed, as the Government has proposed.”

The Children’s Food Campaign is calling for a number of measures to close various loopholes to protect children from junk food marketing and promotions that influence children’s preferences and likely increased consumption of excess sugar and calories. These include: