UK must transition to sustainable food and farming system by 2030, leading Commission warns

The UK must completely transition to a sustainable post-Brexit food system by 2030 or face further climate breakdown and the continued rise in diet-related ill-health, according to the final report of a major Commission led by one of the UK’s leading business figures. 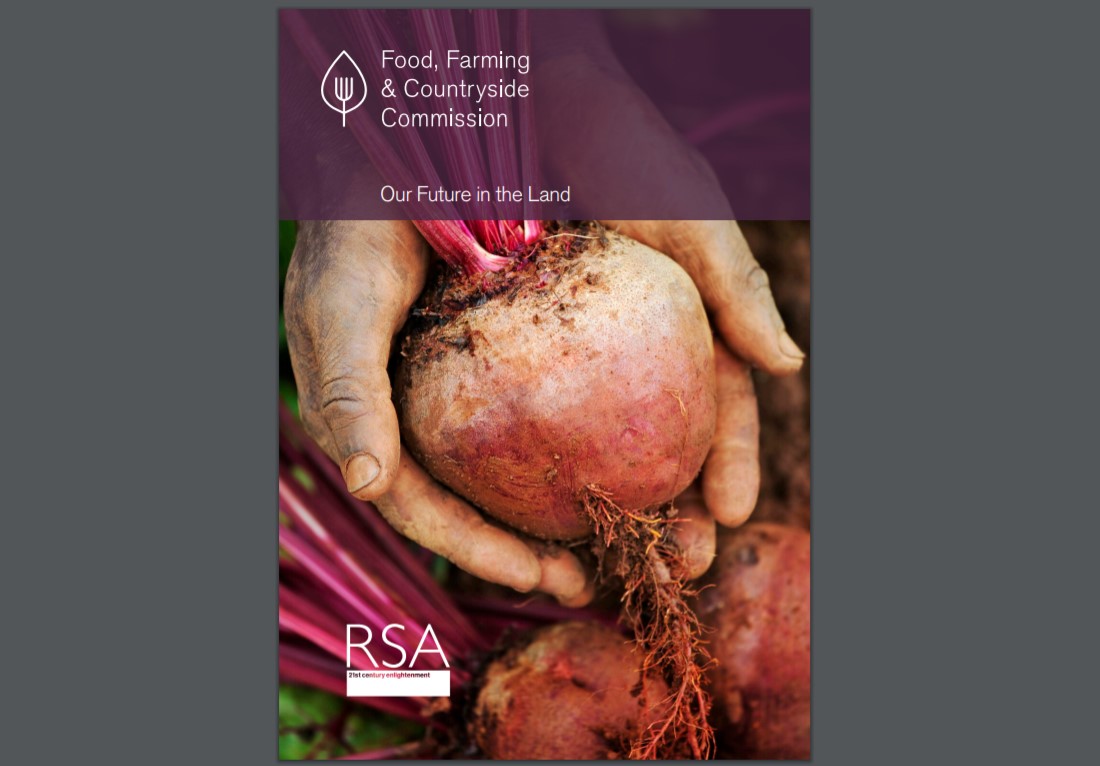 Our Future in the Land by the RSA Food, Farming and Countryside Commission and chaired by Barclay’s UK chair Sir Ian Cheshire alongside senior figures from across industry, sets out a blueprint for the UK’s food, farming and countryside system as the UK is set to leave the European Union.

The final report Our Future in the Land, executive summary and Field Guide to the Future are available to download here: https://www.thersa.org/action-and-research/rsa-projects/public-services-and-communities-folder/food-farming-and-countryside-commission

The UK risks further “deforestation, loss of wildlife, soil degradation, widespread pollution and rocketing diet-related ill-health”, the analysis warns, adding that “instead of being the sector that nourishes people, and the land on which we all depend, it has damaged and depleted our precious and finite resources”.
The two-year independent inquiry, sponsored by the Esmée Fairbairn Foundation and based on extensive consultation of all players in the food and farming system, found that most farmers agreed they could make big changes to the way they farm in five to ten years – with the right backing.

Agroecology means farming in ways that learn from, work with and enhance natural and social systems. Organic farming, integrated pest management, pasture-fed livestock, conservation and regenerative agriculture, and agroforestry are all examples.

Without stable policy, regulation, advice and access to relevant finance and innovation farmers will remain locked into current business practices, the Commissioners warn.

The study also calls for:

Separate studies for the devolved nations will be published in the coming months.

“Our planned exit from the EU creates a once-in-fifty-years opportunity to change our food and farming system, but we need to act now: whatever happens next, the climate emergency makes urgent, radical action on the environment essential.

“The UK has the capability to become the world-leader in healthy, sustainable food production and we set out how in just ten years, we could make radical change and harness farming as a force for wider economic, public health and environmental good.

“We offer government our shared vision for a UK food and farming system which changes our countryside and rural economy and puts farmers in the driving seat. And we invite government to adopt this plan to establish an agro-ecological, sustainable future.”

“The climate and ecosystem emergency are not the only crises we face. The scale of the public health challenge is also dawning on us, from poor diets and mental health, to the effects of pollution and antibiotic resistance. What we eat, and how we produce it, is damaging people and the planet.

“As the UK is set to leave the EU, only through radical government action in a real partnership with business and citizens, can we take this opportunity to overhaul our system for the better. Our report proposes exactly this blueprint and we urge government to take action.”

Kath Dalmeny, chief executive of Sustain and one of the 15 Commissioners on the Food, Farming and Countryside Commission, said:

"The great task of our era is to avert catastrophic climate change and restore nature, critical to maintaining our ability to sustain human life and pursue social progress. Small steps, 'encouragement' and nudges are no longer good enough, we need big, transformative action to create the economic, policy and legislative conditions for better food and farming to thrive and to accelerate into the mainstream. We welcome the Food, Farming and Countryside Commission final report, with practical recommendations for the public values, policies, standards and necessary finance to facilitate the transition we so urgently need."

“This monumental report is a powerful and profound account of the ecological transformation of our food and farming system that we urgently need – and where we can start.

"The government must heed the recommendations, not least by developing new economic measures, embracing strong regulation, and ditching the nonsense narrative we need to produce more food to feed the world. Above all, this is about a historical shift to sustainable farming systems based on agro-ecology, not agro-chemicals. Getting this right is essential for averting climate breakdown, restoring nature and securing human health, wellbeing and livelihoods.”

"This report comes at a most appropriate time as we look towards a new farming system rewarding public goods with public monies. The twin goals of providing sufficient good wholesome food, accessible and affordable against a background of climate change and all that entails means that the emphasis upon agro-ecology is most apposite. However we also need to recognise how important our diversified countryside is and it is vital that we don’t use the forthcoming Agriculture Act as a race towards much larger holdings and industrial-scale farming. That’s why the report’s recommendations must be heeded and acted upon."

“Farming has a vital role to play in tackling the climate emergency and reversing the tragic loss of biodiversity. This report presents tangible steps to help transform our farming industry to one that works with the environment to produce sustainable, healthy food for the future.

“Farmers must be placed at the heart our countryside. As the report suggests, it is time public bodies like schools and hospitals are obliged to buy healthy, sustainable, British food. The disparity between rural and urban areas must also be tackled to provide farmers with much-needed infrastructure and skills. Only by transforming the rural economy through joined-up thinking will this be achieved."

The RSA Food, Farming & Countryside Commission (FFCC) is a two-year independent inquiry, funded by the Esmée Fairbairn Foundation and chaired by Sir Ian Cheshire.  It has looked at how policy, business and community currently shape our food and farming systems and rural communities – what works, what doesn’t and how a more integrated and inclusive approach would drive radical change over the next ten years. October’s interim report, Our Common Ground, reviewed over 1,000 policies which have an impact on the rural economy.  The second stage of enquiry has focused on its three core themes:

The final report sets out a vision for the future and recommendations for changes directed at government, business and communities.

The RSA [the Royal Society for the encouragement of Arts, Manufactures and Commerce] is an independent charity whose mission is to enrich society through ideas and action.