What are we feeding our kids?

A BBC TV programme What are we feeding our kids? (BBC One, Thursday 27 May 2021 at 9pm) reveals what happened when Dr Chris Van Tulleken ate a diet of 80% ultra-processed foods for a month. Children’s Food Campaign Co-ordinator Barbara Crowther considers the issues it raises. 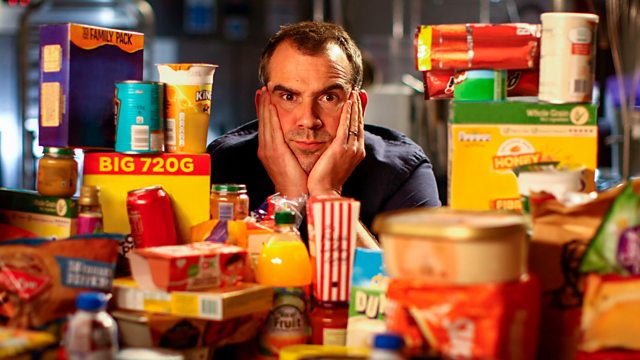 In 2017, study of 19 countries across Europe revealed that we in the UK eat more ‘ultra-processed foods’ (UPFs) than any other country – just over half (51%) of all the food energy consumed in the UK comes from these types of food, compared to 14% in France and just 10% in Portugal.

There is of course nothing intrinsically wrong with some degree of food processing. Apart from products eaten raw like fruit, herbs, salads and vegetables, much of the food we eat is processed to some degree, and we do it ourselves to prepare our meals too. Wheat is milled to flour, milk is pasteurized, and churned into butter and cheese. Pulses, vegetables, fruit and meat are often frozen, dried or canned to make them easier to store and use.

What are ultra-processed foods (UPFs)?

So what is actually meant by ultra-processed foods, and why is concern growing about them? Are they the same as ‘junk food’ or not? One simple way to identify UPFs is they often contain a very long ingredients list, including items you may not be very familiar with, including additional preservatives, humectants, emulsifiers, colouring and flavouring. The food writer Bee Wilson describes them as foods that are:

“so altered that it can be hard to recognise the underlying ingredients. These are concoctions of concoctions, engineered from ingredients that are already highly refined, such as cheap vegetable oils, flours, whey proteins and sugars, which are then whipped up into something more appetising with the help of industrial additives such as emulsifiers.”

The term "ultra-processed food" was first coined back in 2009 by researchers at the University of Sao Paulo, who then developed their NOVA classification of food and drink into four groups:

Are UPFs the same as 'junk food'?

What is immediately apparent is that, although there is a strong overlap between the food and drink in Category 4 – the ultra-processed foods (UPFs) – and foods that are typically high in fat, salt and sugar (HFSS), that is not necessarily always the case. Some foods such as baked beans or wholegrain breakfast cereals with no added sugars are still considered ultra-processed despite containing more healthy nutrients than other UPFs such as  fizzy drinks, crisps and chocolate.  Likewise,  such as bacon, salted nuts and sugar itself are not considered UPFs as they have been through fewer stages of processing, but are still HFSS products. So the NOVA classification per se can feel like a blunt tool for any future policy making or guide to healthy eating at times.  The British Dietetic Association also warns that too simplistic a view of ultra-processed foods may not take into consideration the need for therapeutic and fortification of foods that assists intake for people living with certain health conditions.

What happens if we eat too many UPFs?

However, there is also evidence that the mix of convenience associated with UPFs and the extra additives and ingredients they contain can also result in greater cravings, eating faster, more often and in larger portion sizes. So, when these products are also high in salt, saturated fat and/or sugar, there is a double whammy effect. In the BBC One programme What are we feeding our kids?, by increasing his intake from 30% UPFs to 80% for four weeks, and also allowing himself to eat until he felt full each day, Dr Chris van Tulleken exposes the potential impact that eating too many highly processed, high fat, salt and sugary products, and not enough portions of fresh fruit and vegetables, whole grain fibres can have. His experience as depicted in the programme appears extreme, but it is backed up by independent evidence. An overview of available literature in 2020 revealed that in 37 out of 43 peer-reviewed studies a clear association was made between greater consumption of UPFs and poorer health outcomes. These include greater risk of type-2 diabetes, high blood pressure, cancer, irritable bowel syndrome, cardiovascular diseases, as well as links to increased depression and anxiety levels.

The inclusion of infant formula in NOVA Classification 4 also arouses debate. The World Health Organisation’s clear guidance – also adopted by UK public health bodies - is that breastfeeding is best for at least the first six months of a child’s life, with alternatives governed by strict composition and safety regulations as well as the WHO Code on the Marketing of Infant Formula and Breastmilk Substitutes. For a host of practical and other reasons, many parents still rely on infant and follow-on formulas. There is now a growing children’s food industry constantly developing new weaning and toddler product ranges, which have become an increasing part of family food culture. These now include ‘growing up’ and ‘toddler milks’ that are ultra-processed foods and both the NHS and European Food Safety Authority say they are not a necessary part of children’s diets.  Whilst parents are encouraged to feed young children a range of flavours and textures from six months onwards, and discouraged from feeding them sugary foods altogether before two years of age, many foods marketed for infants (including food pouches) are highly puréed, or presented in processed snacking form, and even products that sound like they’re made mostly with vegetables may be predominantly sweet in flavour, as reports on commercial baby and toddler foods by Children’s Food Campaign member, First Steps Nutrition Trust have documented.

Another overlap is the degree of advertising, marketing and promotion associated with ultra-processed food and drink, especially when it is designed to appeal to children, and this is another concern for the Children’s Food Campaign. A huge proportion of advertising seen on TV and online are for burgers, fried chicken, pizzas, chocolate and sweets, and increasingly by the delivery companies that will now bring these to your doorstep. Whether through use of child-friendly characters, toys and promotional family offers, or by the development of new ranges of healthy, convenient snacks aimed at baby weaning and toddlers, parents are often lured into buying ultra-processed foods for their children, either as treats and rewards, or because claims on the packaging mislead them into thinking they are healthier than they actually are. In effect, children are being conditioned from an early age into snacking and unhealthy fast food habits that may then follow them through their adult life.

Beyond health - UPFs and the planet

A final concern is about the environmental and climate impact of a food culture overly focused on ultra-processed foods. Many of the foods in this category are reliant on sourcing of cheap ingredients such as palm oil, soya, cheap beef, and therefore come with associated problems with land use and deforestation. Added to this, there is also additional energy use associated with processing of ingredients, and the amounts of packaging they require. An October 2020 article in the Lancet also pointed out that environmental assessments of the impact of food rarely take into consideration the specific impacts of UPFs, and that understanding these better would enable more effective policy making towards future food systems that are both healthier and more sustainable.