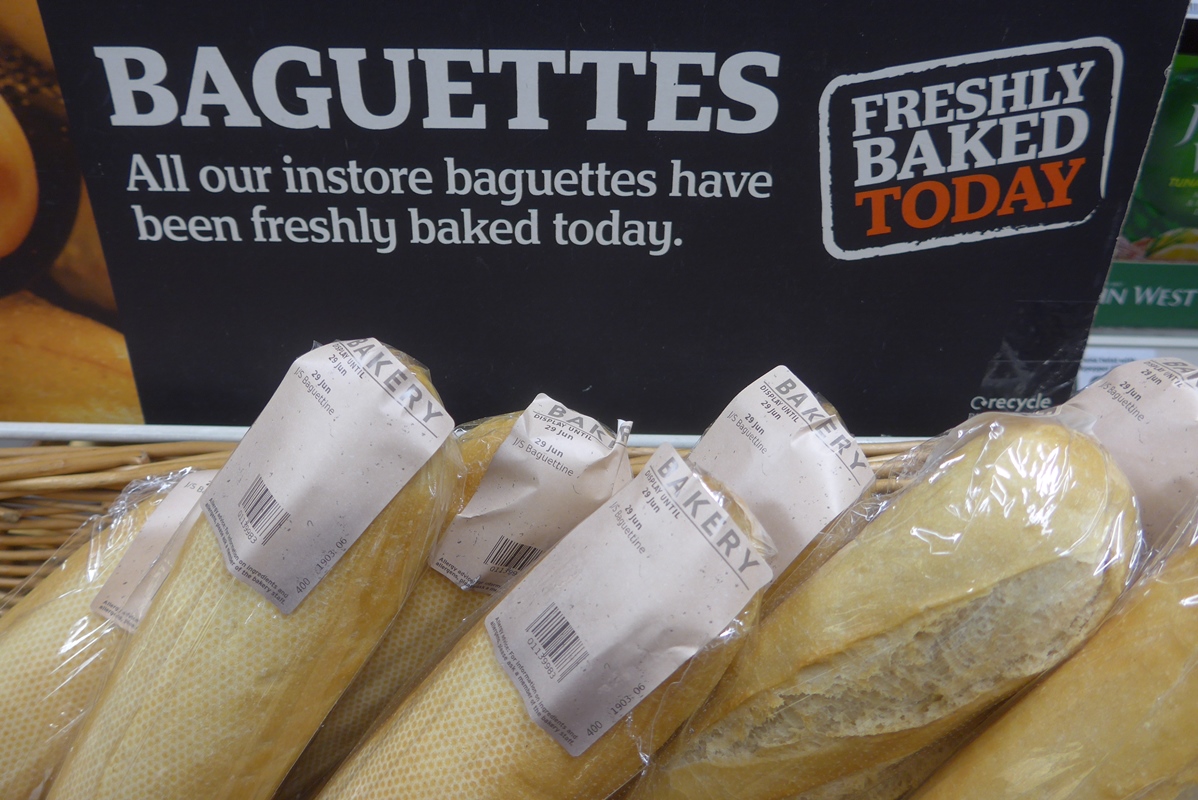 Not on the label: Made elsewhere using additives, then merely re-baked in store. By Chris Young / realbreadcampaign.org CC-BY-SA 4.0

The Real Bread Campaign lobbies for a change in loaf labelling and marketing legislation, an Honest Crust Act, that would help to shift part of the loaf market to small, local, independent Real Bread businesses.

Even a more modest shift to purchasing Real Bread crafted by a more diverse set of smaller producers would lead to a growth in jobs.

On top of this job creation would be the positive effects on each SME bakery’s local community and economy, which would benefit from greater reinvestment of every pound spent.

Then there’s job satisfaction. How fulfilling would you find overseeing a fully-automated, computer-controlled industrial loaf production line, or loading frozen, part-baked products into a supermarket’s loaf tanning salon? We believe that the expertise and craft skills accumulated and used by Real Bread bakers are likely to make their jobs more fulfilling, therefore better supporting their wellbeing.

Shopping in the dark

One of the barriers to growth of Real Bread bakeries is that some manufacturers and retailers are denying shoppers the chance to make fully-informed buying choices. We believe that shoppers are left exposed to this by loopholes in labelling laws, plus a lack of protection from misleading marketing.

Retailers can - legally - choose to sell many loaves and sandwiches without displaying an ingredients list, while additives known as ‘processing aids’ don’t have to be declared to shoppers anywhere at all. Meanwhile, consumer protection bodies say that lack of a legal definition of bread, plus commonly-used marketing terms, allows industrial fabricators, supermarkets and others to use them more or less as they see fit.

An Honest Crust Act would help to level out the playing field on which Real Bread bakeries (that do actually make genuine sourdough - and other bread - fresh from scratch using artisan skills and no additives) can compete with manufacturers that just talk the talk.

It would include mandatory full ingredient declaration at point of sale for all loaves, wraps, sandwiches and so on, plus meaningful, legal definitions of bread and commonly used descriptors such as fresh / freshly-baked, wholegrain, sourdough, artisan, craft, traditional, heritage wheat and ancient grains. Shoppers could then more easily see what they're getting and whether or not any comparisons they make are truly like-for-like.

Back in November 2018, Michael Gove, the then Secretary of State for Food, Environment and Rural Affairs, promised to review the regulations. In October 2020 we asked the current incumbent at Defra, George Eustice, for a progress report. Despite the department’s target response time of 20 days, and us chasing a reply, we’d still heard nothing back over seven weeks later.

We continue to chase and are planning what we – and you – can do next if the reply is inadequate, or doesn’t come at all. Sign up to our FREE mailing list to stay informed. Better still, please join us to support this – and the rest of our charity’s bready work.

*This calculation is based upon baker and Real Bread Campaign co-founder Andrew Whitley’s estimate that a skilled baker can craft at most 200 loaves per day, then adding an extra 25% to our artisan baking army for retail staff and to cover days off for holidays and sickness.

To knead or not to knead?