Hours before the release of the Sustainable Fish Cities medal table, two of the largest sports caterers in London have pledged to serve sustainable fish across their whole business. The moves by caterers Levy Restaurants UK and Delaware North mean that all the top sports venues in London are served food by companies with public commitments to use only verifiably sustainable fish. 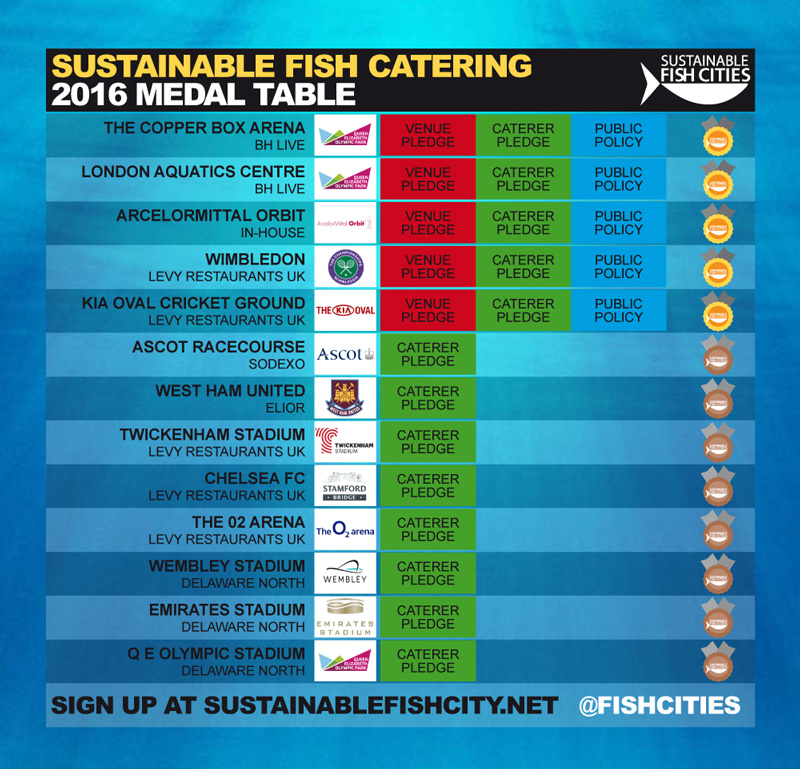 Four years ago, the London 2012 Olympic and Paralympic Games became the first major sporting event to adopt strict sustainability standards for fish, supported by the Sustainable Fish Cities campaign [1]. The Food Vision standards for the Games [2] were widely hailed by conservation groups and sparked a major campaign to call on other large fish-serving businesses to follow suit, leading to the UK Government, NHS in England and Wales and nearly one third of UK universities to adopt the same fish standards [3].

Until recently, a number of London’s top sports venues had no similar policy, meaning that fans and guests might unwittingly be eating critically endangered or unsustainable fish when enjoying their favourite sport. Today’s medal table produced by the Sustainable Fish Cities campaign aimed at first to highlight this mixed bag of catering standards and recognise those that were doing well, but this sparked new pledges from Levy Restaurants UK and Delaware North to add to established fish commitments from venue food providers, BH Live, Elior and Sodexo.

Ruth Westcott, coordinator of Sustainable Fish Cities said “We were really concerned that the fantastic standards set by the London 2012 Olympic and Paralympic Games were not being kept up at sports venues in London, even by those that had hosted Olympic events. So it was wonderful to receive pledges from two such influential caterers – it proves that they really are concerned about supporting sustainable fishing and protecting our marine environment.”

Five London venues have been awarded gold medals for pledging to maintain a sustainable fish policy to apply to all future catering contracts, using their buying power to influence their suppliers. These are the Copper Box Arena, London Aquatics Centre, Arcelormittall Orbit, the All-England Lawn Tennis Club and the Kia Oval Cricket Ground. This week the Marine Stewardship Council and Aquaculture Stewardship Council, which provides certification for sustainable seafood, also confirmed that the 2016 Rio Games will serve certified sustainable wild caught and farmed fish[4].

Colin Bailey, Managing Director of Levy Restaurants UK said: “It’s fantastic that the five iconic sporting venues that we operate at in London have reached the top of the sustainable fish medal table. Sportspeople and consumers can be confident we are doing our bit to protect fish stocks, through serving sustainable fish. Our medal haul reflects our commitment to ensuring fish can be enjoyed by generations to come.”

Ruth Westcott continued “We congratulate BH Live, Elior and Sodexo caterers for their far-sighted approach to conserving the world’s fish stocks, and Levy Restaurants and Delaware North for joining in. By adopting a sustainable fish policy across their whole business, large caterers have the opportunity to make sustainable fish normal, meaning that individual venues and fans don’t need to worry about whether the fish they are eating comes from endangered or sustainable sources. These businesses are also sending an important message back along the supply chain that big companies, providing food in the city’s top venues, are committed to sourcing only fish that is demonstrably sustainable.”

The medal table awarded points on the following basis:

[1] Sustainable Fish Cities is an initiative conceived and supported by an alliance of not-for-profit organisations. We aim to create large-scale change in the fish eaten out of home in the UK by asking fish serving businesses to sign the Sustainable Fish Cities pledge. By signing the pledge, businesses promise to take the appropriate steps to buy and promote sustainable seafood, to protect precious marine environments and fish stocks, and good fishing livelihoods. Specifically to source sustainably by:
- Avoiding the worst: Removing those rated as ‘fish to avoid’ by the Marine Conservation Society:http://www.fishonline.org/fishfinder?min=5&max=5&fish=&avoid=1
-  Promoting the best: Serving sustainably managed fish – MSC/ASC certified, organic, BAP 3* rated or GlobalGap certified, and those rated as ‘fish to eat’ by the Marine Conservation Societyhttp://www.fishonline.org/fishfinder?min=1&max=2&fish=&eat=1
- Improving the rest: Influence wider progress by supporting fishery improvement, telling supplier(s) that they only want to serve sustainable fish, and take time-bound action on any species considered ‘fish to eat occasionally’.
Sustainable Fish Cities is a campaign of the charity Sustain: the alliance for better food and farming. www.sustainweb.org

[2] The London 2012 Food Vision, setting out the food standards for the London 2012 Olympic and Paralympic Games, can be found here https://www.sustainweb.org/olympicfood/food_vision_launched/

[3] UK Government included sustainable fish in their Government Buying Standards, which apply to catering for Whitehall, prisons and some defence catering. In 2013 the Hospital Food Standards made it a legal requirement to serve sustainable fish in English hospitals, and NHS Wales followed suit. More than 30 Universities have signed up to Sustainable Fish Cities with a combined student population of over 500,000.

[4] More information about Rio commitment can be found here: https://www.msc.org/newsroom/news/rio-2016-serves-up-responsibly-sourced-seafood

More information about the venues that achieved gold medals:

The Copper Box Arena
The Copper Box Arena hosted handball, modern pentathlon, fencing and goalball during the 2012 Games, and is now the venue for a wide range of sports and activities and local clubs including the London Lions Basketball team. Hospitality and catering services are managed by BH Live (see below)

London Aquatics Centre
The London Aquatics centre was designed by Zaha Hadid, and hosted all swimming, diving and synchronised swimming events at the London 2012 Olympics. The venue is now a hugely popular training and community swimming pool. Hospitality and catering services are managed by BH Live (see below)

ArcelorMittal Orbit
Created by Anish Kapoor and Cecil Balmond for the 2012 Olympic Games, the ArcelorMittal Orbit is one of the most striking and enduring visual legacies of the Games. The venue signed up to Sustainable Fish cities on behalf of Podium Bar and Kitchen in April 2016. As part of the pledge, they will meet with suppliers regularly to review the products that they sell and ensure they meet sustainability standards.

The All-England Lawn Tennis Club at Wimbledon
The All-England Lawn tennis club provide events catering all year round; with their key event the Wimbledon championships in July. Over this time, they provide nearly a quarter of a million meals to visitors, players, the media and other guests, including an estimated 30,000 portions of fish and chips. The Club have now committed to removing all red-rated species, including new sources of sushi-grade fish for their popular sushi. More information here

More information about the caterers mentioned in the table:

BH Live:
More than three million people visit venues managed by BH live each year. One of the many services that they provide is food for day to day guests and large ceremonial events. BH Live is a social enterprise, which means that all profits are reinvested in social initiatives such as installing renewable energy and into the local communities in which they operate.

Elior
Elior are a large UK caterer serving food in a range of venues including workplaces, hospitals and education sites across the UK, including West Ham United. Elior signed the Sustainable Fish Cities pledge in April 2016. They are now rolling out MSC certification across their sites and have strong commitments to serving green-rated fish. Their sustainable fish policy is here:

Sodexo
Sodexo is one of the largest caterers in the UK and providing food for public and private organisations including many of London's attractions such as HMS Belfast, Royal Ascot and the Chelsea Flower Show. Sodexo UK achieved Marine Stewardship Council Certification in December 2010 and signed up to Sustainable Fish Cities in 2011. Sodexo’s sustainable seafood charter stipulates that suppliers must avoid red-rated fish and places specific sourcing criteria on species for species for which the sustainability varies depending on their source, such as king prawns, plaice, tuna and seabass.

Delaware North
Delaware North’s UK business is one arm of the international Delaware North facilities and catering management company. They specialise in large stadia and event catering and serve food at some of the UK’s most prestigious venues, including Wembley Stadium and the Queen Elizabeth Olympic Park. Inspired by the 2012 Olympic Games in London, Delaware North removed all fish that is ‘red rated’ by the Marine Conservation Society in the run up to the Games.