An investigation by the Real Bread Campaign has found up to 26 ingredients and additives, including refined flour, on the ingredient lists of wholemeal loaves manufactured by nine of the UK’s largest industrial loaf fabicators. 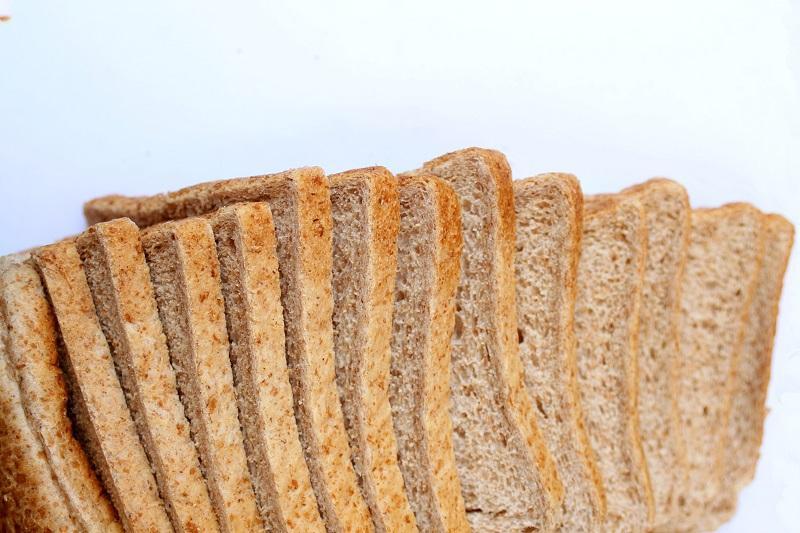 The ingredients list for Tesco Wholemeal Medium Sliced had 26 entries 1, including soya flour, caramelised sugar, polyglycerol polyricinoleate and linseed oil, on top of which other substances may have been used but not declared if the manufacturer deemed them to be ‘processing aids’.2

Article 6 of The Bread and Flour Regulations (1998) demands that for loaves to be named or marketed using the word wholemeal, 100% of the flour used as an ingredient must be wholemeal.3  However, the Real Bread Campaign has found refined white wheat flour listed as an ingredient in wholemeal loaves sold under the ASDA, Hovis, Kingsmill, Morrisons, Roberts, Sainsbury’s, Tesco, Waitrose and Warburtons brands.

As of 5 April, ASDA, Hovis, Roberts, and Sainsbury’s had failed to respond to the Real Bread Campaign’s request for explanation of this apparent discrepancy. The five companies that did respond defended their use of refined flour by claiming that they were not using it as an ingredient, but as a “dressing”, “processing aid”, or “carrier” for an artificial additive. Morrisons and Waitrose both justified the presence of fermented white flour by saying it was being used “in extremely small quantities” of “less than 0.1%” The regulations do not permit any exception on the grounds of quantity, or that it is used to carry artificial additives or to dust the top of a loaf.

Responding to a similar investigation by Which?, Allied Bakeries "claim that the non-wholemeal flours are not used as an ‘ingredient’ but fulfil another purpose, such as texture or to maintain freshness."

Meanwhile, the ingredients list of Hovis Best of Both, marketed with the on-pack claim ‘Twice the wheatgerm of wholemeal bread’ and therefore subject to article 6 of the Regulations, does not include wholemeal flour at all. As well as finding refined wheat flour in the loaves, the Real Bread Campaign discovered that many also contained soya or other non-wheat flours and, in some cases, highly-refined wheat gluten powder.

The Real Bread Campaign has now contacted Defra for an official interpretation to establish if any of the companies is in breach of article 6 of the Regulations, which also prohibit companies from selling or advertising loaves that contravene it.

In order to protect the right of shoppers to be able to make fully-informed choices about the food they buy, the Real Bread Campaign urges the UK government to introduce an Honest Crust Act. Its measures would include the fully-enforced prohibition of the use of any refined flour or artificial additive in wholemeal loaves, ideally limiting the ingredients to wholemeal flour, water, yeast and salt. Between late 2017 and early 2018, more than 1500 people wrote to Michael Gove at Defra in support of this but to date none has received a reply. The Real Bread Campaign will be announcing the next step of this ongoing initiative later this spring.

In the meantime, the Campaign calls upon all bakers and retailers to adopt these voluntarily and suggests anyone wanting genuine wholemeal bread should buy it from a Real Bread bakery, or make their own by hand or machine at home.

People wanting to stay informed of, and support the Real Bread Campaign’s work are encouraged to join today.

7 August 2018: "Unfortunately at this point it is hard for us to give a timescale as our officials are still in the early stages of discussion."
23 August 2018: The Defra Ministerial Contact Unit replied "I have passed this on to our policy officials who are currently deciding on how best to proceed with this and various other points raised by the Real Bread Campaign." We asked for an ETA on a resolution.
31 July 2018: Defra replied: "..we encourage you to provide some further detail on how widespread a practice this is ...If it is indeed a more widespread problem then Defra may consider dealing with it in more detail within our existing guidance notes. We could also bring it to the attention of enforcement authorities more generally through the Food Standards Agency, who have a responsibility for enforcement issues and to food business operators more generally." In response, we sent our findings, as outlined above.
24 April 2018: As more than 15 days had passed, we followed up the orginal query, asking for an ETA on a reply.
29 March 2018: We wrote to Defra to flag up this issue, asking for an official interpretation of the regulations and if they agreed with our view that some companies might be in breach. The auto response stated: 'We aim to reply to queries within 15 working days.'

2) According to Food Standards Agency guidance: Processing aids, including filtration aids and release agents, defined at Article 3.2 (b), are also excluded from the scope of Commission Regulation 1333/2008. In the UK, there is no national legislation on processing aids nor is there any legally defined list of approved processing aids either within the UK or within EU. “Processing aid”, means any substance which: I.is not consumed as a food by itself; II. is intentionally used in the processing of raw materials, foods or their ingredients, to fulfil a certain technological purpose during treatment or processing; and III. may result in the unintentional but technically unavoidable presence in the final product of residues of the substance or its derivatives provided they do not present any health risks and do not have any technological effect on the final product. www.food.gov.uk/sites/default/files/multimedia/pdfs/guidance/food-additives-legislation-guidance-to-compliance.pdf

3) There shall not be used in the labelling or advertising of bread, as part of the name of the bread, whether or not qualified by other words — (a) the word ‘wholemeal’ unless all the flour used as an ingredient in the preparation of the bread is wholemeal […] (2) No person shall sell or advertise for sale any bread in contravention of this regulation. www.legislation.gov.uk/uksi/1998/141/regulation/6/made