The General Election on 8 June 2017 is our opportunity to get legal standards for hospital food on the political agenda and in the manifesto of the next UK government. 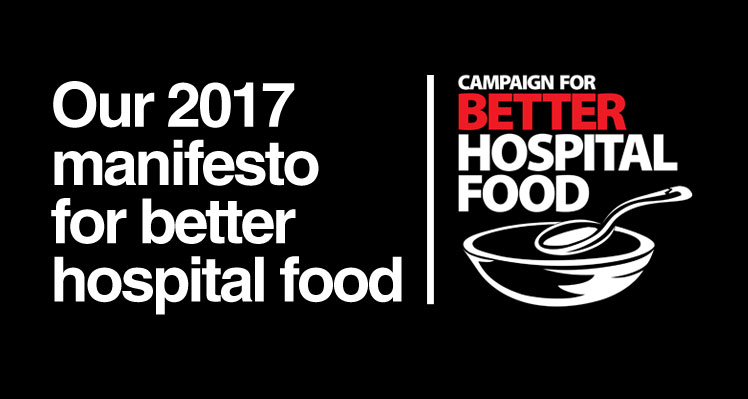 We ask the next government of the UK to introduce legal standards for hospital food.

The Campaign for Better Hospital food is calling for legal standards for hospital food, like the food standards that already exist in schools, to protect patients from bargain basement meals.

The standard of food in schools and in prisons is protected by legal minimum standards and we ask that the same is granted to hospital food by the next UK government. According to figures released by the Department of Health, almost half of hospitals in England do not meet even basic hospital food standards - and we think patients and the hardworking NHS staff that treat them, deserve better.

The Campaign for Better Hospital Food, and co-signatories, ask for the following changes to policy:

At the moment, flimsy hospital food rules exist in the NHS Standard Contract for hospitals; these are advisory and unenforced.  As a result almost half of hospitals do not meet these standards. NHS England has introduced targets to reduce the sale and promotion of sugary drinks and foods high in fat, salt and sugar. However, these targets are both voluntary, with no legal penalty for retailers for failing to meet these standards, and temporary, at present extending only until March 2019.

The principles for better hospital food standards set out in this letter were supported by the following people and organisations in our April 2017 report: ‘Taking the Pulse of Hospital Food; A Survey of NHS Hospitals using London as a Test Case’:

Rosie Boycott, Chair of the London Food Board