Save Our School Food Standards

*** For the latest on school food standards, see this news item. ***

Appetising and nutritious school food is important for children's health and well-being, and for their education. The School Food Trust has produced a thorough analysis of school meals which proves just how much has changed for the better since the introduction of nutritional standards. The mandatory standards have also given parents peace of mind, knowing that whatever temptations lurk beyond the gate, at least in school their children will eat a nutritious meal and have access to healthy snacks.

However, since academies created between June 2010 and March 2014 (just under half of secondary schools in England) aren’t subject to the standards, there is a real danger of poor quality food creeping back on the menu or in tuck shops and other similar outlets. This has been illustrated by the School Food Trust’s 2012 survey of academies, which found nine out of every ten surveyed were selling at least one of the snack foods high in sugar, salt or fat that would be non complaint of the school food standards other state schools have to meet. Despite asking to be made aware of such evidence, and now being presented with it, the position of the government remains unchanged. All the government need do to protect the million-plus children who attend academy schools is ensure that the standards apply once again to all schools, including academies and free schools.

In November 2012 LACA published results of its survey of 12,000 parents, and the numbers speak for themselves: 92.3% of parents wanted schools to adhere by the standards and 92.1% thought there should be an independent body to monitor them.

Save Our School Food Standards campaign

Back in February 2012, we came together with the Jamie Oliver Foundation, LACA, Food for Life Partnership and School Food Matters to launch the Save Our School Food Standards (SOSFood) campaign. We have been calling for academies and free schools to be required to comply with the same mandatory standards for school food currently safeguarding the quality of food available in maintained schools. 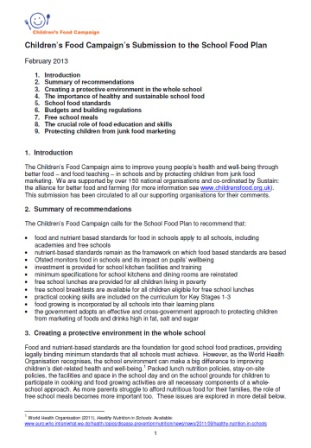 The government commissioned a review of school food – the School Food Plan – headed by restaurateurs Henry Dimbleby and John Vincent. Currently the draft revised standards are in their consultation phase, so this is the key time to set out our case and show the depth of evidence and breadth of support for the standards.Our lobbying has already had an effect. When the School Food Plan was announced, nutritional standards were included within its remit. At almost every turn, Henry Dimbleby, John Vincent and their secretariat within the Department for Education have come across representatives from schools, caterers and health and education campaigners in favour of new standards.

Download a copy of our submission to the School Food Plan, covering the range of issues and policies that we believe will make the most difference to providing nutritious food in schools and ensure all pupils receive a solid foundation in food education and practical cooking and growing skills. 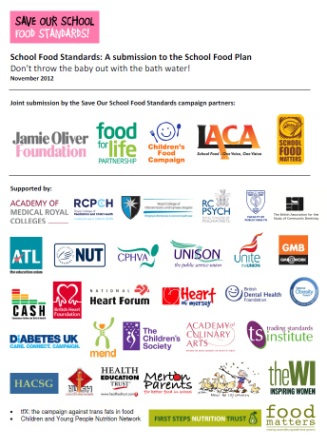 Together with our SOSFood campaign partners, we have drawn up a joint submission to the School Food Plan, setting out the evidence for why we need to protect the investment already made in children’s health and wellbeing and ensure mandatory school food standards apply to all schools. As the submission makes clear, standards are just one piece of the school food puzzle but we believe that mandatory minimum standards represent the foundations of any school food provision. As a minimum, mandatory standards protect children from unhealthy food that will have an adverse effect on their ability to learn. At best, standards provide the catalyst for schools to be ambitious and embed excellence in school food and food education.

In spring 2014 the Department for Education consulted on revised school food standards, based on recommendations from the School Food Plan standards panel. Read our submission.