Is agroecology finally on the political agenda?

Defra’s latest blog post on their New Entrant Support Scheme (NESS) made specific mention of ‘an agroecology system’ in reference to the kind of farming in which they wanted to invest and encourage to grow. Is the Government turning to agroecology to deliver the type of farming it wants to see? 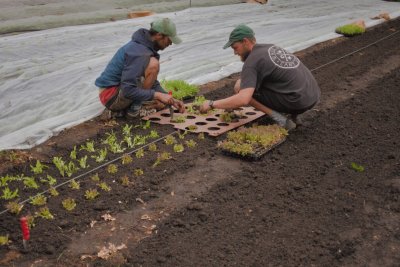 Agroecology as a way to encourage new entrants into farming

Defra’s up-coming New Entrant Support Scheme (NESS) is the Government’s response to the multiple barriers people new to farming face when trying to get a foothold onto the ladder.

These are largely young people from diverse backgrounds, who do not have a farming background or network – including family ties – to give them a helping start. The significance of these barriers and what is needed to overcome them were described in an earlier post on Farmstarts.

This is crucial when you consider that the farming sector is the least diverse (i.e. farmers are overwhelmingly white, straight and male, though some progress is being made, e.g. Agrespect) and most aged (e.g. a third of all farm holders in England were over the age of 65 years in 2016). Compounded with this are the major adaptations that the sector will face given the widespread damage that long-term monoculture, conventional tillage practices and chemical inputs (pesticides, herbicides and fertilisers) have wrought on the environment.

Agriculture has thus been vilified as a major contributing factor towards soil erosion and overall decline in soil health, rapid species extinction and carbon loss that has been exacerbating climate change. George Monbiot in particular is publicly waving this flag.

Nonetheless, what George Monbiot is overlooking and what is missing from a simple story of how agriculture has wreaked havoc in our dominion over nature is that there are different ways of farming and some of these hold the key to reversing the more systemic and sustained costs that have been incurred. And these different ways can also be hugely attractive to new entrants.

In particular, agroecology is a way of farming that integrates environmental and social justice issues at its core. Organic farming represents an agroecological system developed over many decades of farmer-led learning and with standards and outcomes and independent assessment.

Our Sustainable Farming Campaign group at Sustain has several publications on agroecology, including a summary explanation:

Agroecology is the application of ecological concepts and principles to optimise interactions between plants, animals, humans, and the environment while taking into consideration the social aspects that need to be addressed for a sustainable and fair food system. By building synergies, agroecology can support food production, security and nutrition while restoring the ecosystem services and biodiversity that are essential for farming. Agroecology can play an important role in building resilience and adapting to climate change. It is also based on cultural diversity and open knowledge sharing, while supporting decent livelihoods for all who operate in (farmers and workers) and rely on (citizens) the food system.

Not surprisingly, agroecology is a core term in my work in campaigning for better food systems at urban edges. My digital ears therefore pricked up when Defra’s latest NESS blog post made specific mention of ‘an agroecology system’. This was in reference to the kind of farming in which they wanted to invest and encourage to grow. Can we take this as a sign that the Government is turning to agroecology for implementing the type of farming it wants to see?

The Government’s Agriculture Act 2020 came out after Brexit. It set out the terms and regulatory conditions needed to fill the void of leaving the EU’s Common Agriculture Policy (CAP). These were around, for example, payments to farmers for public goods, food security, supply chains and trade agreements. It also marked the first formal mention of agroecology, though not in a substantial way. In setting out the terms for providing financial assistance for better public understanding of the environment, the Act made reference to agroecology.

However, agroecology made more of a dent in a House of Commons Briefing Paper on the Agriculture Act 2020. The Paper included several mentions of the term, most significantly of which were criticisms of the Act from both Kerry McCarthy – Labour MP, East Bristol – and Daniel Zeichner – Shadow Minister for Food, Farming and Fisheries – for not sufficiently supporting agroecological food production. Though not conceding to these criticisms, Victoria Prentis – Minister of State for Food, Farming and Fisheries – recognised agroecological farming as serving multiple benefits for the environment and society and was part of more environmentally sustainable food production.

Fast forward a couple of years to the present and agroecological farming does seem to have gained some – albeit modest – political support. On 14th June, we held a roundtable discussion in Westminster on peri-urban farming, which was sponsored by Kerry McCarthy and made up of Peers, Labour and Tory MPs, and a Labour MS from the Welsh Senedd. Across the board, there was enthusiasm and backing for the kind of farming that we were advocating, i.e. one that brings ecological and community benefits together with local supplies of fresh fruit and vegetables.

“Desperately recognise that we need food but we also need to create biodiversity etc. - what I hear today actually you can bring those two together and quite successfully.” – Derek Thomas, Conservative MP for St Ives & Member of the House of Commons Environment, Food and Rural Affairs (EFRA) committee and member of the APPG on Agroecology for Sustainable Food and Farming

“A big part of the policy ought to be looking at how we can use our land more effectively for sustainable and small-scale remedies.” - Lord John Whitty, Labour Peer, Member of the House of Lords Food, Poverty, Health and Environment Committee and Environment and Climate Change Committee

What I think is happening is that politicians, and hopefully the public as well, are recognising that not all ways of farming are equal, and that there are certain ways that can also create multiple wins for biodiversity, carbon capture, soil health, social health and wellbeing, community resilience, career opportunities for new entrants, and so on.

Without making agroecology out to be the Holy Grail, I think it serves as a move in the right direction and the Government would do well to turn to it as part of its agenda on Levelling Up and the new Environmental Land Management (ELM) farming policy, climate change and other environmental commitments, food security and public health. The proof is in the pudding as well, with agroecological examples across the UK doing truly great grassroots work. Our Fringe Farming partners are a good start if you want to see for yourself.

We welcomed the inclusion of agroecology in Henry Dimbleby’s National Food Strategy but were at a loss at its absence in the Government’s Food Strategy White Paper that came out on 13th June (not to mention a whole host of reasons to be disappointed with this). So what can we do to get agroecology on the political agenda in a meaningful way?

A simple way is to keep beating the agroecology drum and sharing the evidence of multiple benefits so that it becomes part of the political lexicon. You can also support and make noise for your local agroecological initiatives, such as Kindling Trust in Manchester, Mach Maethlon in Machynlleth and OrganicLea in London. I’m a big believer in the premise that the more we go on about it, the more people will listen!