Grow our own; buy the rest from a wide range of outlets 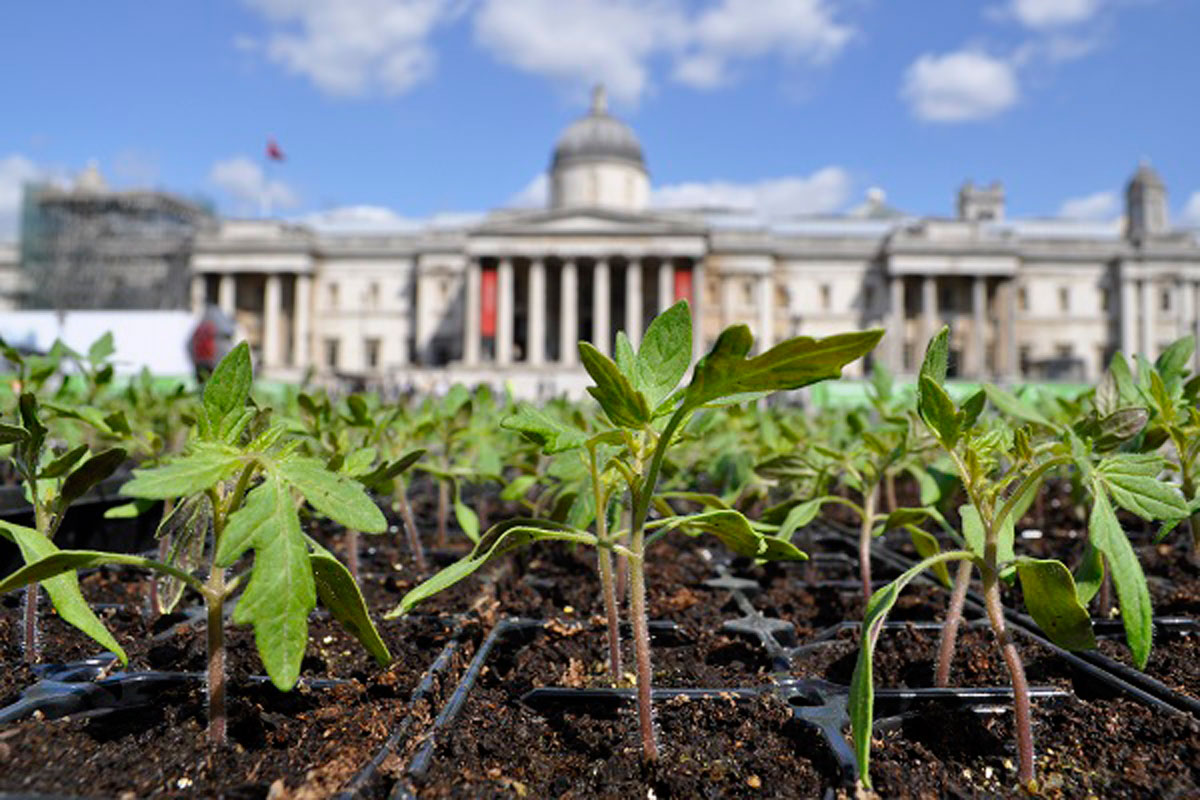 We’ve lost touch with our roots

The UK was the first country in the world to industrialise so our families began to leave rural areas around 250 years ago to work in factories in towns and cities. Only around one in a hundred jobs are now on farms and, for most of us, neither our grandparents nor even great-grandparents were farmers. This means that most of us know very little about how our food is grown, what food is in season when, or even what fresh food – straight from the farm – tastes like. In 2010 yet another survey showed the extent of our ignorance by revealing that one in four children think the contents of a bacon sandwich come from a sheep! Cooking is not compulsory in all schools and in many homes parents are not able to teach their children to prepare healthy meals, either.

The power of the big supermarkets

Without first-hand experience of growing and cooking food, we often have to rely on what the food industry tells us – on the packaging and in ads – about the food we’re buying. We’re also buying food from fewer and fewer companies. In 2002 we bought half (50%) of our groceries from the four big supermarkets (Tesco, Sainsbury’s, Asda and Morrisons) but this has now risen to around three-quarters (75%). In some ways this is understandable as supermarkets provide an apparently huge range of products at very affordable prices, all under one roof and at stores that are sometimes open 24 hours a day. But this concentration of market power in just a handful of companies can cause problems, for example:

The death of the high street and the rise of the ‘clone town’.
Most towns and high streets have now lost most of their independent butcher, baker and greengrocer shops. Supermarkets can often sell some staple products, such as factory loaves and milk, as ‘loss leaders’ – at a price below the costs of producing it, to attract customers into the store. They can make up the loss by passing the costs onto the suppliers (see below) or by charging more for other products in the store. Local specialist producers often cannot compete with this unfair pricing and are driven out of business.

Once local shops begin to close it can often spell the death of the high street, and means that our choice to shop there is lost. Those town centres that manage to hang on are now mostly dominated by chains, including smaller versions of the major supermarkets. A New Economics Foundation report describes these as ‘clone towns’, and shows the damage being done to the local area, including lost jobs and local identity.

Squeezing farmers out of business.
In 2012 there were protests all over the country about the low price of milk in supermarkets forcing British dairy farmers out of business. Eventually agreement was reached to increase the price slightly, but it is not clear how long this agreement will last and this was just the latest example of farmers and other suppliers being treated unfairly by the major retailers. And it’s not just British farmers that are under pressure. Poor farmers from poor countries are also squeezed by supermarkets’ pressure for ever lower prices and for very stringent cosmetic standards for fresh produce.

This abuse of market power has led to a number of enquiries into the supermarkets’ behaviour by the Competition Commission and to long-standing calls from a wide range of campaign groups for a supermarket ombudsman. This would have legal powers to make sure that, for example, supermarkets pay their suppliers promptly, have fair contracts that they can’t pull out of at a moment’s notice, and don’t demand retrospective payments.

Campaign pressure has been successful, and the government’s Groceries Code Adjudicator (appointed in January 2013) will have legal powers, described by Government as follows: "If the Adjudicator finds that retailers are breaching the Groceries Code and treating their suppliers unlawfully or unfairly, he or she will be able to apply a range of sanctions. In most cases, this would consist of recommendations or ‘naming and shaming’ but, if the breach is serious enough, the Adjudicator will have an immediate power to fine the retailer." However, the Adjudicator does not have a remit to tackle supermarkets on other ethical or environmental issues, nor on their promotion of junk food, including to children.

Putting all our eggs in four baskets
A smaller number of companies dominating the retail market has led to a smaller number of companies supplying them. Fewer and fewer companies are now able to supply the huge, year-round volume of products that supermarkets require. With fewer, but longer and more complex and inter-linked supply chains, the security risks rise. Contamination in just one part of the chain can mean the problem is spread across large parts of the whole food system, as the horsemeat scandal in 2013 so amply illustrated. Similarly, these supply chains rely on cheap oil, leaving us vulnerable to oil price rises, fuel protests or natural disasters. It has been suggested that this system, coupled with ‘just in time’ deliveries and low stock levels in stores means we are ‘nine meals from anarchy’.

Recent years have seen a resurgence in people wanting to grow their own food. In 2008, fruit and veg seed sales overtook flower seeds for the first time and in 2011 there were at least 87,000 people across the country on allotment waiting lists. In response to this demand, the Capital Growth campaign helped to create over 2,000 new community food growing spaces in London between 2008 and 2012. Similar initiatives are spreading to other towns and cities, supported by The Big Dig, and many areas also have Master Gardeners. All these groups, and many others, encourage people to use organic principles and practices in their growing activities. Among many other benefits, organic gardening reduces the risks to people and wildlife of using pesticides.

As well as growing more food and helping to ‘re-green’ unloved patches of land, growing food in towns and cities can, as Garden Organic has noted: "...buffer the extremes of the urban environment – ameliorating temperatures, providing absorbent surfaces and preventing water run-off, filtering and cleaning air, not to mention absorbing carbon dioxide."

Community food growing can also bring communities together, provide skills that can improve employability, and enhance our health by reducing stress, increasing physical activity and encouraging us to eat more fresh and delicious produce.

Spread around our shopping pounds

The more money we spend with local outlets, the more it stays in our local area, helping to retain jobs and keep our town centres alive. It also means we’re less likely to use our cars, and more likely to meet our neighbours on the stroll to or from the shop or market – good for our health, keeping down the traffic, and for community spirit!

Local authorities can help the local food system to thrive by, for example:

To start or develop a community garden:

Want to go further and start generating some income with your food growing skills? Try these: