Eluned Watson looks at how Makaton signs and symbols support Derwen College students in their bakery and beyond. 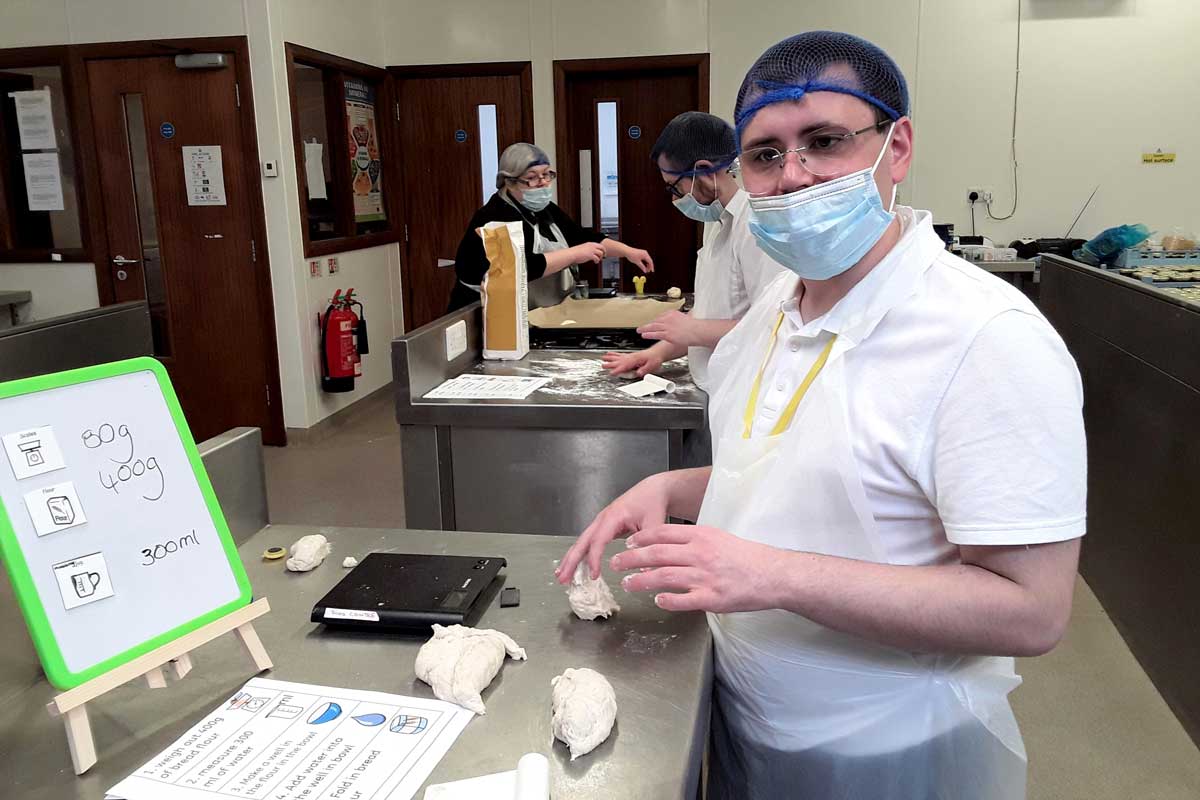 Sam in the bakery © Derwen College

Set in picturesque countryside near Oswestry on the English-Welsh border, Derwen College is a national specialist college. We help young people aged from 16 to 24 with a range of complex learning difficulties and disabilities to break down barriers and aspire to future employment and independence.

The College offers significant and realistic on-site work placements for students in our commercial areas, which are open to the public. These include our Walled Garden Café, Karten Print Shop, Derwen College Garden Centre and Gift Shop, a three-bedroom training hotel and a charity shop. During lockdown, we also opened Tip Top Takeout, a service for staff and students to collect takeaway breakfasts and lunches.

In our Food Centre Bakery, students make bread, cakes, jams and chutneys to sell though our shop and eateries. On a Monday morning, for example, third year students Sam (pictured), Jake and Jacob make bread rolls to sell in the Garden Centre and Gift Shop. Once the rolls are in the oven, they turn their attention to making fresh pizzas to sell at TipTop Takeout.

For many of our 130 students, communication difficulties can cause challenges and frustrations, which we use Makaton to help alleviate. Makaton was created in the 1970s by speech and language therapists Margaret Walker, Kathy Johnston and Tony Cornforth, from whose first names the word comes. The system is designed to support and reinforce the spoken and written word by using simple signs and symbols in usual word order alongside speech. Around the kitchen, and indeed the whole college, Makaton signage is the norm, providing visual reminders to wash hands regularly, as well as symbols on kitchen tools and appliances such as the fridge. We also use Makaton symbols on visual resources, such as recipes for students on our Hospitality & Food pathway.

For students who can’t read, or prefer visual prompts, pictures and Makaton symbols are vital. Jake particularly benefits from Makaton signs and symbols, which reinforce verbal and written instructions. For Jake, who has Down’s Syndrome, the added communication support gives him more independence as he relies less on teacher instruction. The symbols also help to focus his attention. Hospitality teacher and Makaton tutor Paula Hampson says: “Good communication is key to learning new skills. Makaton signs and symbols support students with learning and communication difficulties to understand and to be better understood. Many of our students benefit from it, even those without communication difficulties. I use it naturally along with speech, sometimes without even thinking about it.”

Most of the signs are relatively easy to pick up and even knowing basic signs aids understanding. For example, the sign for bread is the action of slicing a loaf, and the one for baking enacts stirring a spoon in a mixing bowl. “We adapt the bread-making process for a range of students with different abilities and needs. Sometimes we have to think outside the box if a student doesn’t have the physical dexterity to use certain tools or techniques. In the same way, we adapt our communication methods to ensure that a student can understand and be understood,” Paula adds.

All staff at Derwen College are required to have at least a Level One training course in Makaton. The college has also developed Support Work apps, featuring Makaton symbols, which students can use on phones and tablets to guide them through work tasks, getting ready for work, and in creating a CV. We have eight Makaton tutors. Julie Hawkins, our Head of Speech and Language Therapy, is a Senior Makaton Tutor (one of only eight in the country) and a National Symbols Advisor for the charity.

Julie says: “It is vital that students are understood, and that they be given every opportunity to communicate feelings and needs. Makaton signs and symbols support communication and increase understanding. This helps to extinguish some of the frustrations that students feel at not being understood. Using Makaton, staff can better explain what is expected of students and to communicate clearly when there is an issue. Students know instantly if you’ve genuinely understood them or not, and you can see the relief on their faces when they realise they can communicate with you through Makaton.”

We are proud of our long-established relationship with The Makaton Charity. Indeed, the college was one of the first specialist colleges to work with Makaton and we’re honoured to have hosted Makaton events and welcomed visitors from around the world to see our flagship provision.

In addition to people with communication and learning difficulties and the community around them (family, friends, teachers and health professionals, for example) the Makaton language is becoming known more widely. Children learn Makaton from an early age from CBBC television favourite Mr Tumble, and celebrities can be seen using Makaton sign for thank you on shows such as Strictly Come Dancing. Today over 100,000 children and adults use Makaton signs and symbols, either as their main method of communication or as a way to support speech.

So spread not just the word but also the symbols: There’s no excuse not to learn basic signs while waiting for your dough to rise!