Penny Williams of The Artisan Bakery School in Devon looks at how wheats from the past might pave the road to a healthy future. 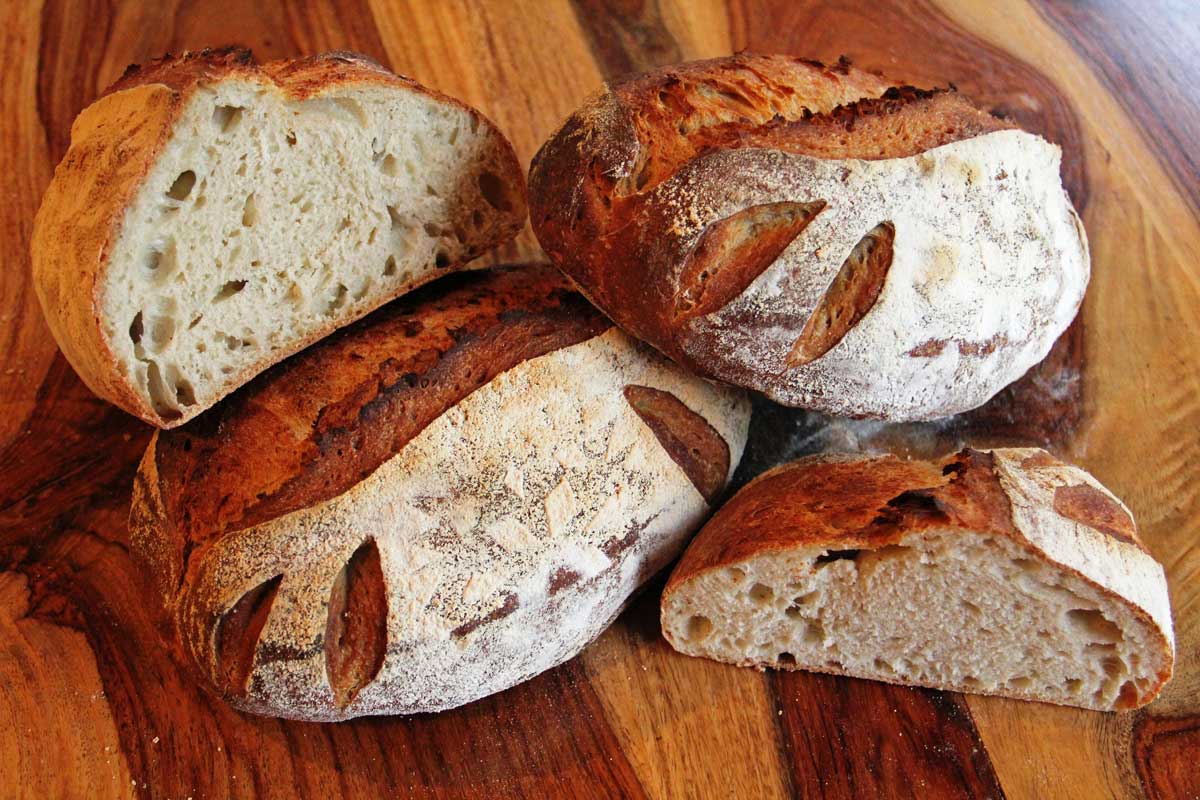 How many people do you talk to these days who tell you that they don’t eat much bread? I’m meeting more and more of them. There’s the wistful expression of those who say they can’t eat it due to (known or assumed) intolerances, allergies or full-blown coeliac disease. Then there’s the rather virtuous expression of those who believe that bread is not only fattening but also nutritionally worthless and not eating it is some sign of moral rectitude.

Both kinds of bread refuseniks* leave me in a turmoil of pity and frustration.  I have pity for anyone who has been made ill by years of eating industrial loaves, and frustration with those who have thrown the baby out with the bath water; ‘sliced pap is bad for you’ and Real Bread gets damned by association. Beware the Big Bad Loaf!

None of this is necessary. As all readers of True Loaf will know, it is perfectly possible to bake a good loaf using only flour, water and salt. Given sufficient hours, a natural sourdough leaven will modify wheat proteins, increase the bioavailability of nutrients, moderate the release of sugars in the baked result and might improve digestibility, making slow-mo dough a healthier option for some people.  It takes patience to explain all this to customers, but the reward comes when they return for more Real Bread with a big smile on their faces, saying they have found loaves they can eat; no more bloating, no more nausea, no more lethargy. It’s all about time, we tell them, and you can’t cheat time.

What is less common knowledge is that the kind of flour you use can have equally significant effects. Not only on the nutritional values of your bread, but on the long-term health of our bodies, our environment, our economy and our whole society. If you think that sounds a bit grand for a humble loaf, remember that the issue of bread has always been political, and in an era of growing concerns about food security and food safety (a different issue), it’s going to get more political than ever.[more political than it’s been for a while in the west, at least. ed.]

Over time, the genetic structure of wheat has changed. Ancient wheats have two (diploid) or four (tetraploid) sets of chromosomes (for example einkorn and emmer, respectively), while more modern wheats (including spelt and varieties of bread wheat known as ‘heritage’) have six (hexaploid) or more sets. What effects could these changes be having on us?

Gluten is composed of glutenin and gliadin proteins, some of the latter being antigenic - responsible for triggering the autoimmune response in people with coeliac disease. In 2011, an article in The Indian Journal of Medical Research referred to an ‘impending epidemic’ of coeliac disease, implicating the recent introduction of modern wheats: ‘The ancient or diploid wheats (e.g. Triticum monococcum) are poorly antigenic, while the modern hexaploid wheats (e.g. Triticum aestivum) have highly antigenic glutens, more capable of inducing celiac disease. India, for centuries, grew diploid and later tetraploid wheat which is less antigenic, while hexaploid wheat used in making bread is recently introduced. Thus a change back to older varieties of wheat may have public health consequences.’ That’s one reason why I believe the cultivation of ancient wheats should be championed right here in the UK.

And it’s not just a question of ancient versus modern. A 2010 study of hexaploid wheats by a team led by Hetty van den Broeck** looked at thirty six modern European wheat varieties and fifty samples representing heritage wheat varieties grown up to around a century ago to compare the levels of antigenic gliadins. The findings suggested that modern wheat breeding practices may have led to an increased exposure to these coeliac ‘trigger’ proteins. While they also identified a few modern varieties that had relatively low levels of the antigenic proteins, and suggested that these might be used as a basis for a ‘low CD toxic’ breeding programme, I question whether tinkering with modern wheat is really the right direction to be going in.

Gradually, even the huge variety of heritage bread wheats once grown in this country has been suppressed.  During the Green Revolution of the 1960s in particular, there was a sharp increase in the nature of the wheat in our fields being deliberately manipulated to improve yields and to facilitate harvesting, rather than to improve nutrition.  As wheat was increasingly hybridised, levels of vitamins and other micronutrients decreased.

The health of our land is also in question. The countryside is now swathed in vast fields of monocultured crops that require ever more pesticides and chemical fertilisers in a continually depleted soil.  That’s another reason why ancient and heritage varieties should be restored to common cultivation; if they are grown in sympathetic soil regions, and with multiple varieties to a field, they don’t need as many, or any, chemical products. The idea of genetically modifying wheat to make it resistant to chemicals (look up Monsanto and Roundup Ready crops, for example) is just insane.

The seed libraries of the world are stuffed with specimens that do well naturally in different regions, and are resistant to various blights, pests and weather conditions. What we don’t have in the libraries are humans who still have the skills to farm this way.  They have been lost as farmers have been forced to dance to corporate tunes, rather than nurture the local knowledge handed down through the generations.

It is now illegal to market (which includes giving away as well as selling) plant seeds that are not on a national list of permitted varieties; at the time of writing, the oldest variety bread wheat on the UK list is Maris Widgeon, which only dates back to 1964.  This form of social disempowerment is as dangerous as it is subtle.  It leaves all the choices in the hands of government and ‘big farma’, by which I mean the agribusiness giants that have only profit at heart.  If farmers have no real choice about which grains to grow, then any choices we make about what bread to eat are inherently compromised, as is the long-term physical health of society at large.

This genetic erosion is as real and threatening as the coastal variety. In fact, as our climate continues to prove unstable, the need for a greater diversity in grain varieties is bigger than ever -  there are wheat varieties that are naturally more drought resistant, some that do better in the wet, and others that resist lodging, or falling over in the wind. Some recognition of the need to conserve ancients and heritage cereals is happening – hence those seed libraries that are not mere labs for GM, and a token tolerance of ‘special varieties’. But it is the population at large that needs to be more informed, and far more concerned.

Every course we run at The Artisan Bakery School is a chance to teach people about the values of heritage flours. Not only why they are so important in the big picture, but how delectable, nutritious and downright gourmet they can be.  If people can make educated choices about pinot grigio versus sauvignon blanc, surely they can learn to appreciate the differences between ancient cereals including emmer, einkorn and khorasan; heritage bread wheats, such as Bartholomew and April Bearded; and the late 20th / early 21st century varieties that produce the vast majority of flour on sale today. People are picking up on spelt, even if we frequently do have to point out that it isn’t either gluten- or wheat-free!

What’s needed is more of a national information campaign, but with such vast corporate interests vested against it, it’s unlikely to happen soon. So it’s up to all us Real Bread bakers to lead the way and bake to a healthier future, one loaf at a time.

*Author's opinion. The Real Bread Campaign knows that a minority of people do have to avoid, or even eliminate, wheat (or some varieties of wheat) or gluten on genuine medical grounds. Read more on these issues.