Baking on a budget

In 2014, Suzie Mundell reported on a Real Bread project launched by a supported housing association earlier that year. 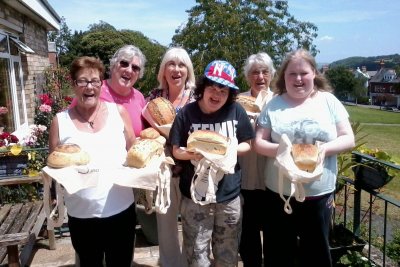 Spectrum Housing Group is a non-profit organisation, formed in 2007.* We own and manage approximately 18,000 homes and maintain a further 45,000 across the south of England. We work in partnership with local authorities, health trusts, statutory bodies, a range of voluntary organisations and higher education establishments to create safe, sustainable communities.

Earlier this year, we launched Use Your Loaf, a project to bring together staff members, residents, and other local people together for half-day workshops, in which they get to discover how easy, cheap and satisfying it is to make their own bread.

The idea is simple, but very effective: we find a kitchen and then invite people to join us to make bread.  The food is good, nutritious and doesn’t cost a lot to make. We run sessions in community centres and church halls in our neighbourhoods. They are organised and promoted by our housing teams, and run by staff in our Community Investment team.

Each three hour session teaches participants how to make a basic loaf, explains some of the science and history of breadmaking, demonstrates other simple bread recipes and provides a sociable, healthy lunch. Each participant makes a loaf from scratch to take home with them.  “I was so excited to get home and show everyone my bread that I rushed to the supermarket and made more rolls when I got home,” said Suzanne Harding after one of the classes.

As True Loaf readers know,  bread-making is not labour intensive or difficult, and during our sessions there is plenty of down-time to chat, drink tea and prepare the lunch whilst their dough is proving.

The sessions have proved very popular, and have been successful in teaching people how to make bread, as well as being enjoyable social occasions where a mix of staff, residents and non-residents can meet each other in a relaxed, informal and positive setting. After a session at Downside Community Centre, Spectrum housing officer Rebecca Morgan said “This has been an absolutely fantastic morning, really enjoyable and lovely spending quality time with residents and colleagues.”

So far we have held 24 sessions for a total of 218 people. The feedback has been fantastic: 100% of participants said that they had enjoyed taking part in the project, and 91% said that they would make bread again at home. What’s more, 80% agreed that making bread had given them a sense of achievement and 81% said they had learnt a new skill.

Even our CEO, Richard Hill has got stuck in. “I’m very pleased to say that the loaf that I made was very well-received at home!  And that, since the session, I’ve had two baking sessions at home with the kids, one to make bread and one tortillas, and they have been (almost) as successful.”

Together We Rise
Real Bread for All