Why does bread go stale?

Mark Whitehead unknots the science behind staling and shows that it's not just drying out. 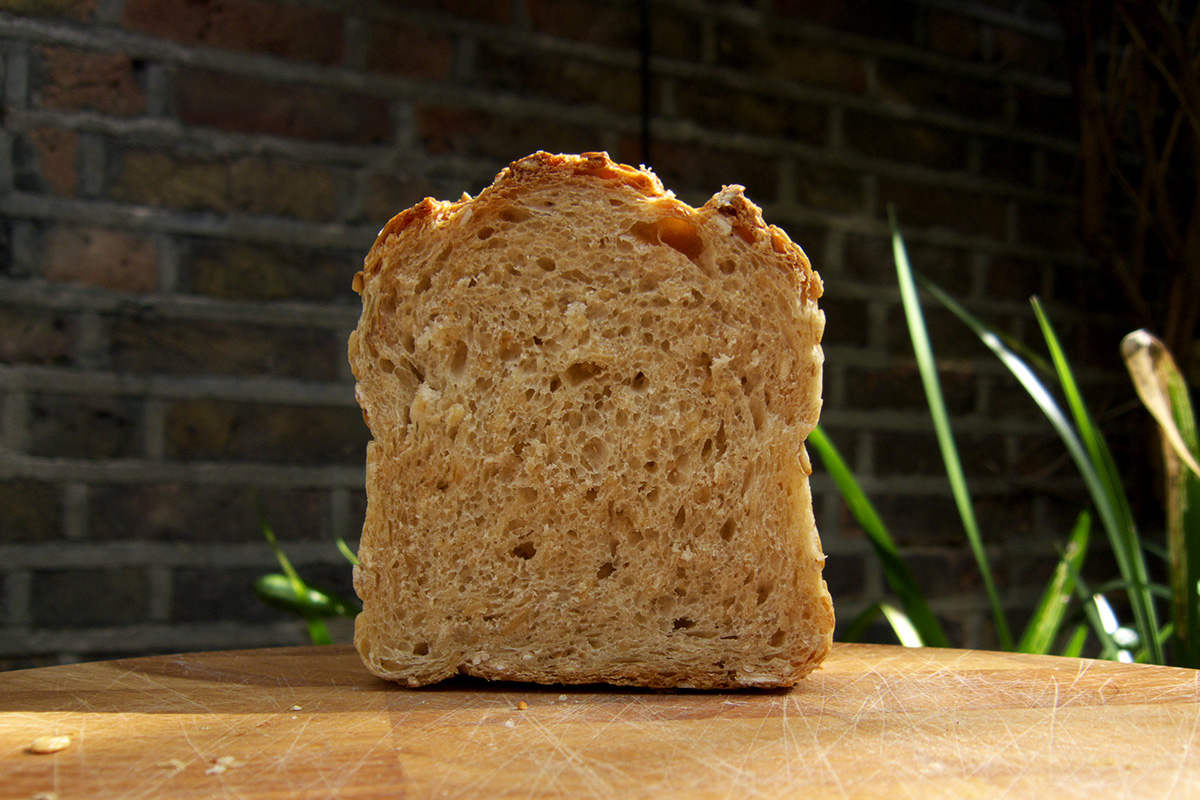 Whilst bread contains many other nutrients (e.g. protein) and fibre, it's the starch content that is important in bread staling. Plain white bread contains a lot of starch: in the order of 45-50%.

Starch is a very long chain of almost circular glucose molecules joined together.  The number of glucose molecules (called 'residues' in labs) in the chain varies but in bread wheat it's in the thousands, 15,000 being on the low side. In the grain, these long chains lie more or less parallel for long stretches and are attracted to each other.  This attraction, although not always a full chemical bond, is still moderately strong.

When we add water to starch and then heat it, the chains tend to break away from their straight-line format and form curves and waves.  They are still attached to each other, but not nearly as much, and molecules of water often lie between the chains for much of their length.  This forms a gel that helps to give a loafís crumb its moist and flexible consistency.

The bending and curving of the chains is brought about by heat of the oven and is kept that way, to an extent, by the water from the dough.  Chains of protein, also in the wheat, behave in much the same way, though not to the same extent.  This is why a still-warm loaf is not very firm, tears easily, and can be doughy if you try to slice it too soon.*

As the bread cools and some more of the water evaporates, the chains pull a little closer together and the bread gets its normal firmness.

Whilst the starch can't move much once the bread is cool, it can still move to a small extent.  It is not held in rigid lines, so the bread remains flexible.  However, the starch 'wants' to get back into its original shape with the long chains parallel and attached to each other.  It can only do this gradually as the water molecules, which are strongly attracted to the starch chains, get in the way.

Over time, however, the starch can get some of what it wants.  Some parts of the chains can get parallel again firming up the bread a bit more.  Eventually, given enough time, lots of the chains go back (or retrograde, if you listen to food scientists) to their original, less flexible state.  The bread becomes firmer, and as it is no longer closely attached to the starch, water will evaporate and the bread will become drier. This is what we call staling.

One natural substance that will help slow down the process of staling is fat. In many bread recipes, there is some fat, such as oil, lard or butter. In small quantities, fat stops the water moving around so much, leaving it attached to the starch chains. This is what prevents immediate staling. The fat also slows down the movement of water that is not joined to the starch chains.  This 'free' water also helps to stop the starch chains coming back together in their original state.

But even with added fat, as the bread dries out, there is less water to keep the chains apart, making it increasingly easy for the chains to meet up again. A loaf doesnít need to lose much water for the staling to accelerate and the less water there is in a loaf, the easier it is for the starch to retrograde.

What to do with stale bread

Some people's instant reaction is to chuck it out.  However, you can 'revive' stale bread. Just heating it up a little in a microwave will do the job well.  The heating causes the chains to flex out of their parallel state and the bread becomes edible again.  However, you don't get all that long, as you'll lose some water when you re-heat the bread, allowing it to go stale that much quicker.

Whatever you do, don't throw it away! You can use it for toast (and some people say that slightly stale bread makes better toast than fresh) or as a 'trencher' for some kind of moist, hot food on top, such as a casserole.

You can find other ideas for enjoying stale bread in Slow Dough: Real Bread and our free recipes section.

* Tempting though bread fresh from the oven is, it's best if left to cool before slicing. As well as the doughiness issue, slicing hot bread too soon will cut short the 'carry over' cooking that completes the baking after removing a loaf from the oven, and allows much more steam to escape. Allowing the bread to cool means more of this water will be kept in the loaf, helping it to stay moister longer. It is often said that cooled bread is more digestible, though we have yet to see any research that supports this belief. [ed.]