As Chancellor of the Exchequer Rishi Sunak MP prepares the next Government Spending Review, Sustain has submitted five policy proposals to ensure all children have access to healthy food. 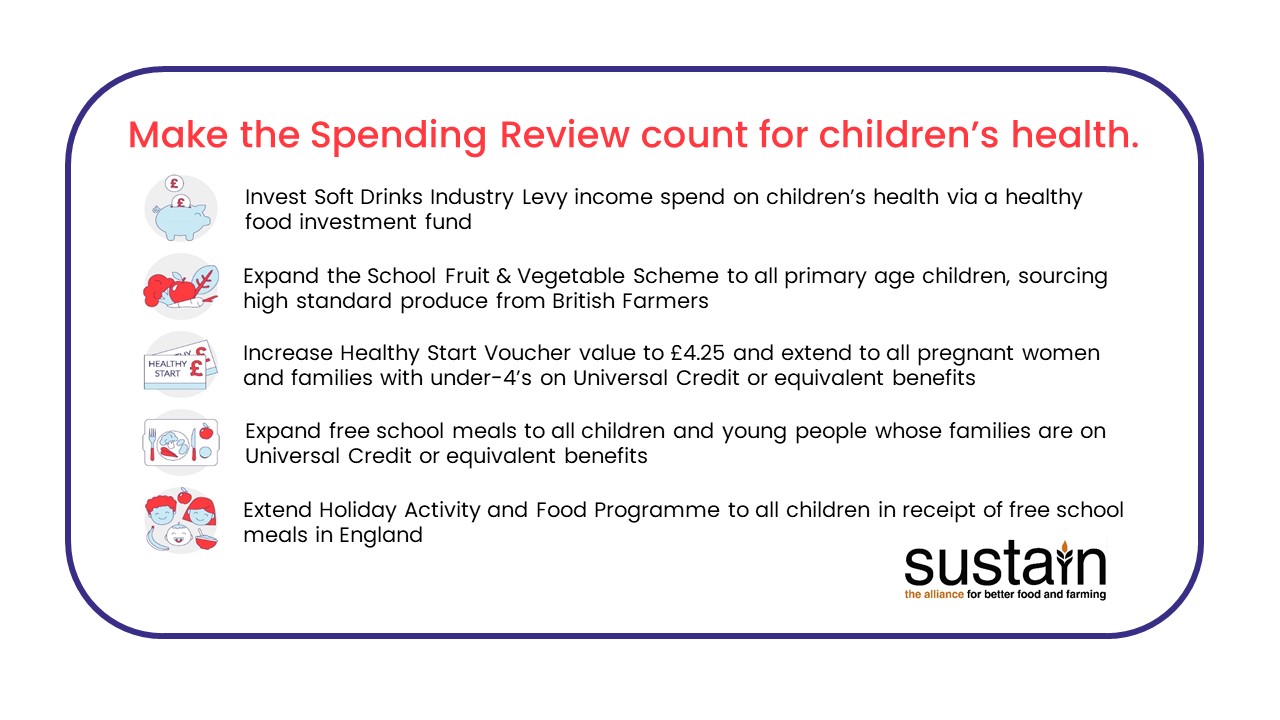 Whilst Rishi Sunak today postponed this Autumn's budget, the Treasury will continue with plans for a comprehensive spending review, which is an exercise normally conducted every three years to lay out longer term funding allocations to each Government department.

There is no doubt that the ongoing Covid-19 emergency is likely to make the current spending review an even more hotly contested negotiation than ever. However Sustain is arguing that children's health must be at the heart of thinking for a more resilient future. Even before Covid-19, 1 in 5 children lived in households with low or unpredictable income and the risk of food insecurity. Months of lockdown have also taken their toll on children's healthy diets, with reports of reduced intake of fresh fruit and veg and higher consumption of snacks.

More than ever, the Government needs to ensure that every child is able to access healthy and nutritious food, and this is the principle that underpins the five recommendations contained in Sustain's representation on child health to the Treasury's spending review process.

To support its submission, Sustain has also launched a public e-action - asking MPs to support the call for investment in children's food and health.

Take the e-action to MPs now!

The five policy calls included in the submission are:

Sustain and Children's Food campaign recommend that the Government extend the levy to include milk-based drinks high in sugar (like milkshakes), and lower the threshold under which the levy applies to 4.5g per 100ml, in line with the Nutrient Profile Model. With the levy forecast to raise £340 million per year from 2020-24, and agreement that this should be ringfenced for children's health, we are calling on Government to establish a new Healthy Food Innovation Fund for schools and local communities. Sustain is currently running a survey for school leaders and local authorities to contribute to how such a fund might work.

Expanding the School Fruit and Vegetable Scheme to all children in primary school would reduce inequalities in access and tackle low levels of fruit and veg consumption, which have decreased even further in some households during the Covid-19 lockdown periods. Sustain is also calling on Government to increase the proportion of British seasonal fruit and vegetables produced to higher standards such as organic to support British farmers and help the economy. We estimate the expansion and improvement would double the cost of the scheme to a modest total of £80 million a year.

3. Increase  the  value of the Healthy Start Vouchers to £4.25  and  extend to all pregnant women and families with under-4’s on Universal Credit.

Increasing the value of Healthy Start vouchers to £4.25 per week would bring it into line with Scotland's Best Start scheme. Expand eligibility to all households with children under 4 or pregnant women who receive Universal Credit or equivalent benefits would increase the number of total beneficiaries to 540,000. We also argue for accelerated digitisation of the service, including an online application process and smartcard, and run a two-year targeted campaign to improve take up, reduce stigma and ensure diverse retailers, such as market traders, encourage their use. This would cost an estimated £110 million a year, with additional £5 million for communications campaign.

4. Expand free school meals to all children  and young people  whose families are on Universal  Credit  or equivalent benefits, regardless of immigration status.

An additional 1.5 million 7-16 year olds would benefit from free school meals under this proposal, taking the total number of children to 2.6 million. This must include children with no recourse to public funds through a permanent extension of eligibility. This measures must be in addition to continuation of Universal Infant Free School Meals, and long term Sustain would like to see  eligibility expanded much more widely. Extending to all under Universal Credit or equivalent benefits as a first step is estimated to cost an additional £670 million a year.

5. Extend  school  holiday  activity and  food  provision  to all children in receipt of free school meals in England.

In 2019, the Government Holiday and Activity Prorgramme  programme reached just 50,000 children in 17 local authorities. The recommendation to expand this so that every local authority is able to make provision for every child eligible for Free School Meals. This is estimated to cost an additional £200 million a year.

Sustain and Children's Food Campaign have also joined a wider coalition of over 30 organisations including the Food Foundation, School Food Matters, Children's Society, Bite Back 2030 in support of the three recommendations on free school meals, holiday provision and Healthy Start that were also put forward by the Government food adviser Henry Dimbleby in Part One of the National Food Strategy.  These recommendations are now also being championed by premier league footballer and anti-poverty campaigner Marcus Rashford, who helped secure the recent Government u-turn over continuing food provision for children receiving free school meals over the summer school holidays.

Sustain also submitted a representation to the Comprehensive Spending Review putting forward proposals for how food and farming should be at the heart of plans to stimulate an economic recovery.