Ukraine: What bread lovers can do

Some of the official and unofficial responses to the crisis. 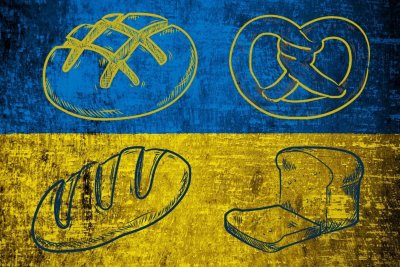 The ongoing Russian invasion of Ukraine has displaced hundreds of thousands of people, whose homes have been destroyed or who are fleeing imminent danger.

People need food, clothing, bedding, medicine, healthcare, protection, shelter and other essentials. A number of organisations have launched appeals to help collect, or raise funds to buy, such items and send them to people who have fled their homes and, in many cases, homeland.

There are a number of options for professional and hobby bakers who want to help raise funds towards these efforts.

Real Bread bakers who run classes, bake sales or other bready fundraising efforts are welcome to add the details to the Real Bread Campaign events calendar.

The Charity Commission and Fundraising Regulator have urged people to ‘give safely’ to registered charities.

The Charity Commission has also issued a statement on the implications for charities.

Many other appeals have been launched, some of which are included in this BBC News list of suggestions of how people in the UK can help.

Bakers Against Racism is calling bakers, cooks and other food producers around the world to run emergency bake sales. #BakeForUkraine

As an example of how bakers are getting involved in this, on Sunday 6 March, Real Bread Campaign supporters Ma Baker and Ruth’s Little Kitchen are hosting a virtual Bake for Ukraine bread class.

Some bakeries are donating their profits (or takings) to relevant registered charites for a given product and/or period.

Ukrainian-born cook and author Olia Hercules has launched #CookForUkraine, setting up a Just Giving page with suggestions of how bakers and cooks can raise money.

Inspired by Cook For Ukraine, #BakeWithUkraine / #ПечемозУкраїною has set up a Just Giving page to collect for The British Red Cross Society's response to the Ukraine crisis. They suggest baking Ukrainian and other eastern European breads and pastries to raise money.