The letter, from Sustain and partners to Ministers George Eustice and Victoria Prentis, calls on Defra to implement an accelerated and ambitious Agricultural Transition Plan and national food strategy in order to tackle the various problems of our food system and its food and nutrition security vulnerabilities. 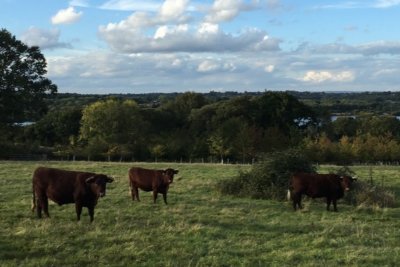 Sustain's Head of Farming, Vicki Hird, spoke to Charlotte Smith on the Farming Today programme to discuss the letter (published in full below) and explain what the Government should do in light of concerns that the war in Ukraine will cause serious food security problems.

"It is absolutely imperative that we do not slowdown or distract from the Agricultural Transition Plan. We need to build in resilience to the farming system for the long-term; not lurch from one crisis to the next.

There are really big, important reasons for... keeping land that is being protected for the natural systems that we need to build up to deliver the kind of resilient farming we need in the future when climate impacts get ever more intense.

We need to build in less reliance on very vulnerable supplies from overseas, for costly inputs... We need to build up our capacity to produce... and think about what we're using land for."

Vicki highlighted some of the alternative decisions that countries could take, such as removing the mandate and subsidies for using crops to make biofuel, financially supporting reslience and sustainability, helping farmers diversify supply chains, and looking at one-off emergency funding to help farmers with immediate rising costs.

The war in Ukraine is posing additional challenges to global food and energy security as well as food and farming input costs, on top of the systemic issues we already face. There have been calls on the UK Government to respond by pausing the roll out of the Agricultural Transition Plan (ATP), halting the phase out of direct payments for two years and intensifying production. We believe this would be the wrong action to take and that the Government should deliver an ambitious ATP.

The transition plan should support all farmers to deliver public goods and produce healthy food in an ecologically positive way by making Environmental Land Management (ELM) more ambitious and accelerating the schedule. The Government needs to recognise whole farm approaches as part of the solution to the UK’s food security. This would help farmers move away from a dependence on synthetic fertilisers, pesticides, fossil fuels and animal feed inputs. Instead of using land to produce intensive animal feed and bioenergy crops, it should be used to produce food for human consumption such as sustainably grown vegetables, fruit, pulses and wholegrains.

We understand that the Government’s response to the National Food Strategy has been delayed while the situation in Ukraine dominates. However, rising costs to consumers, anticipated autumn shortages, and warnings of hunger as families choose between food and heat, demonstrate the need for the Government to remain proactive and ambitious in tackling challenges presented by the food system. What is happening in Ukraine should not hinder our domestic approach of public money for public goods, which the Government has worked hard on, but rather it shows how a truly sustainable food system is so vital and needed in the UK.