Action on Sugar and 47 leading health charities and research groups, including the Children's Food Campaign, are urging the Prime Minister Boris Johnson to implement all recommendations from existing Childhood Obesity Plans. 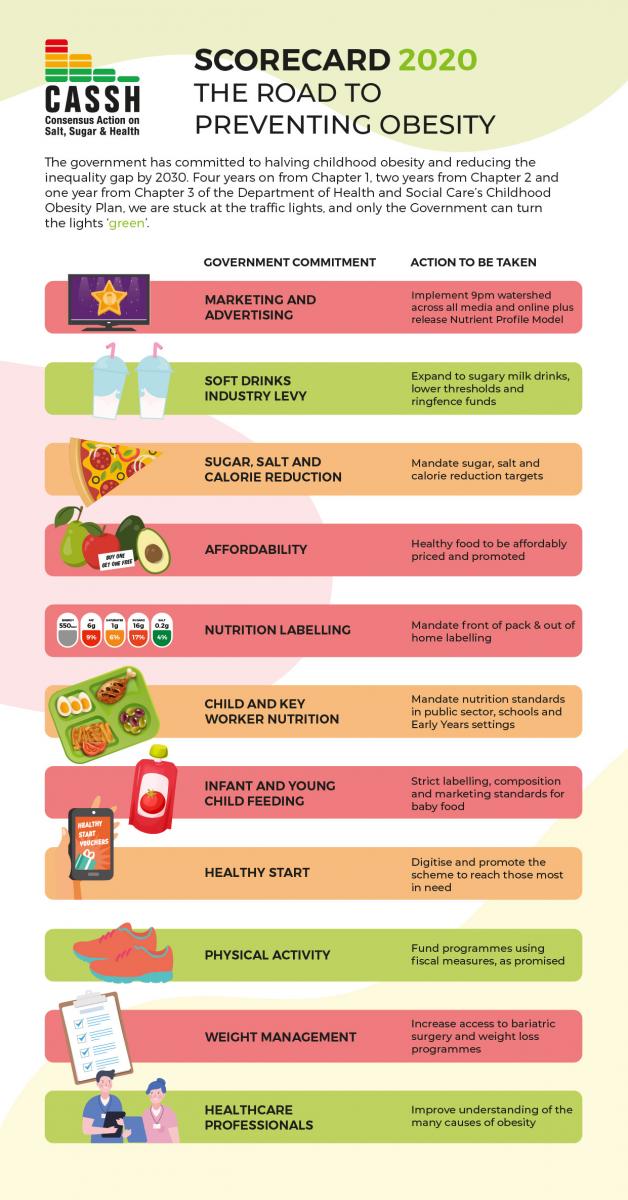 Ahead of the Prime Minister’s imminent plans to address obesity in the UK, Action on Sugar, Action on Salt and 47 leading health charities and researchers representing both the treatment and prevention of obesity, are urging Mr Johnson to implement all outstanding recommendations previously committed to in Chapters 1, 2 and 3 of the Government’s Childhood Obesity Plan, including vital action to ban junk food advertising before 9pm.

Action on Sugar and Action on Salt’s traffic light Scorecard 2020:The road to preventing obesity analyses the Government’s commitments against progress of the three chapters, finding that many of the core recommendations aimed at improving the lives of both children and adults living with obesity - such as calorie reduction targets and clearer nutrition labels on food and drink products - have disappointingly been side lined and are stuck at the traffic lights.

However, despite ‘sources’ indicating that many of these core recommendations are now being reconsidered as part of the Government’s NEW obesity strategy (Chapter 4) – a plan that excludes restrictions on junk food marketing and advertising across all media platforms - including live TV, TV on demand, radio, online, social media, apps, in-game, cinema, digital outdoor advertising such as billboards - will NOT deliver the necessary impact on public health, the experts warn. Treating and preventing obesity requires a raft of measures - singular actions cannot solve the problem and allow far too many loopholes.

"The Government already has many of the necessary ingredients for a new recipe to tackle obesity and build a healthier food environment for our children. However, launching an obesity plan without comprehensive 9pm watershed on TV and online advertising and tightening marketing and promotional regulations, would be like trying to bake bread without yeast or leaven. It would simply fall flat. There has never been a more important time for the Government to take the bold, courageous action it has long promised, so that today's children grow up healthier, happier and more resilient in the fact of any future disease or risk."

Food and drinks that are high in fat, salt or sugar (HFSS) should not be permitted to advertise before 9pm. Following a Government consultation which closed in June 2019 and is yet to be implemented, strong, albeit cautious, evidence was presented on the need to restrict junk food advertising. The consultation demonstrated that this policy will:

Give a new obesity plan the green light

The letter from the organisations to the Prime Minister ends by saying, Prime Minister, we are all agreed: only you can ensure progress on this leading plan and secure a healthy future for the next generation. The time has come to give the Childhood Obesity Plan the green light.

“In order for the Prime Minister’s new obesity plan to be effective and change the health trajectory of future generations, a robust and joined up policy package is required rather than a pick and mix of measures which allow loopholes to be exploited. With inequalities once again brought to the forefront as a result of COVID-19, Mr Johnson has a golden opportunity to ensure that lessons learned during the pandemic are translated to equitable access to health for all.”

Graham MacGregor, Professor of Cardiovascular Medicine and Chair of Action on Sugar and Salt, says:

“This is the Government’s golden opportunity to fully implement an obesity plan here in the UK – four years after Chapter 1 was officially published. Since then, we’ve seen far more lengthy consultation processes rather than direct action which now must change. If we can address obesity and care for the health of our population, we will become more resistant to life threatening diseases like COVID-19 in the future.”

“Marketeers had the opportunity to voluntarily cease unhealthy food and drink advertising during this pandemic, yet they continued to pump out adverts for fast food delivery companies, chocolates, sweets and more.  In 2019, for over 80% of the ‘less healthy’ products advertised before 9pm there was a healthier alternative within the same company that could have been promoted instead.  The time has now passed for being soft on industries that ‘feed’ into the obesity crisis and profit from a culture of encouraging lazing, gazing and grazing.”

Recommendations on the future of health prevention in the UK